Ryan Hallam breaks down the first basemen you should be targeting if you're waiting on the position and looking to fill the void after the tenth round! 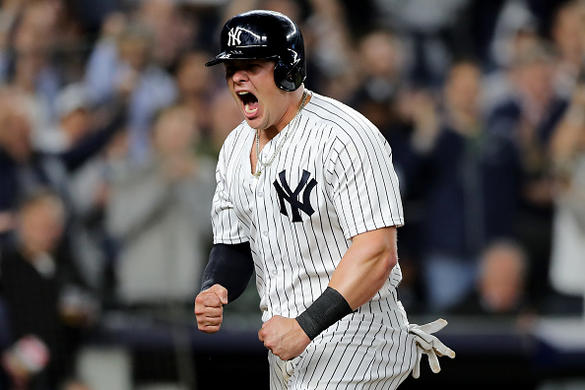 Once the crown jewel of the fantasy baseball diamond, first base has become a much more shallow position than it used to be. Several years ago everyone in a 12-team league would have a borderline superstar on their roster at first, but now you actually have to really think of how to field this position. When you take into account that many leagues also require a corner infielder then first base is even more of a danger zone. If you don’t take your first baseman in the first five-to-six rounds in the draft you are going to have to piece this together. If you play in a league that requires that corner infielder, you certainly will be looking into a lower-round option. For those who wait, let’s look at players whose current ADP according to the NFBC is after the tenth round.

Yuli Gurriel , Houston Astros (ADP: 126 overall). There will be no garbage can references here. His home run total from last season was a bit of a surprise as it matched what he put up in 2017 and 2018 combined, but it wasn’t a complete shock. Gurriel is a complete hitter, as he can rack up a good batting average and hits for power. He has raised his launch angle from 10.3 degrees in 2017 to 14.5 degrees in 2019, so that can account for some of the increase in home runs. It would be a bit of a surprise if he popped 30 home runs again, but 25 is more than a reasonable expectation. Unlike a lot of other baseball players, Gurriel consistently hits for an average right around .300, as he has been over .290 for three straight seasons.

Carlos Santana , Cleveland Indians (ADP: 141 overall). His batting average has been all over the place in his career, but he had his highest number last season at .281. He is far from a superstar, but Santana has been fairly consistent throughout his career. He is generally good for around 25 home runs and 80-85 RBI in any given season. Santana is also a guy who doesn’t strikeout a lot by today’s standards, and he generally throws in a half dozen stolen bases as well despite his less than athletic physique. He will hit in the middle of the Indians solid lineup, and can certainly give you enough production to be your starting first baseman, while you spend the first 13 rounds stacking your team elsewhere.

Edwin Encarnación , Chicago White Sox (ADP: 176 overall). This is one of my favorite mid-round targets, and I can’t understand his ADP. He doesn’t hit for a great batting average, but Encarnacion has been one of the more consistent power hitters in the last ten years. He was second in the league last season with a launch angle of 22.5 degrees. He hasn’t had fewer than 30 home runs since 2011, and he has topped 35 in five of the last eight years. Last season was the first time he didn’t have 100 RBI since 2014, but he only played 109 games in 2019. The White Sox are going to have a solid lineup this year, and Encarnacion is going to be in the middle of it. He will be their regular DH, but will have first base eligibility, and is an absolute steal in the 14th round.

Luke Voit , New York Yankees (ADP: 196 overall). There seems to be a little concern about playing time for Voit, but I think he will be at first base for at least 140 games. The guy is a bonafide slugger if he can stay healthy. Voit burst on the scene with 14 home runs in 39 games in 2018, and was more than adequate last season with 21 round trippers in just 118 games. Voit missed a month with a sports hernia, and the Yankees traded for Edwin Encarnación at the deadline. Both of those factors are now behind him as Encarnacion is in Chicago, and Voit is healthy. Voit plays his home games in a hitter’s paradise, and will continue to be a consistent power hitter who won’t hurt you in batting average. Look for Voit to put 25 balls in the seats this year and hit just over .280.

C.J. Cron , Detroit Tigers (ADP: 254 overall). After years of showing a ton of potential but being blocked behind Albert Pujols for the Angels, Cron was finally set free over the past two years with stints in Tampa Bay and Minnesota. The power was never a question for the 6’4”, 235-pound monster of a man, he always just needed opportunity. Cron has hit 55 home runs in the last two seasons combined, and has hit exactly .253 in each. Detroit is far from a hitter’s park, but the guy has strength that can put the ball in the stands in any ballpark. The Tigers are going to be awful this year, but Cron will be one of their better hitters. With them set to lose 100 games again this year, opposing pitchers might not be motivated to pitch too finely to Cron. Look for him to see a bunch of fastballs, and a .250 average and 25 home runs should easily be in the cards for him.

Renato Núñez , Baltimore Orioles (ADP: 277 overall). As obvious with the last three hitters on this list, you can’t completely ignore players in drafts because they play for horrible baseball teams. Even the Tigers, Orioles, and Marlins are going to score some runs, you just have to know who to target. Nunez will never win a batting title, but this soon-to-be 26-year-old has some serious pop in his bat, and was one of five hitters to have an average launch angle of 20 degrees or more in 2019. He hit 31 home runs last year for the Orioles, and had 102 home runs in four seasons at various levels of the Athletics minor league system so this power is no fluke. His average will likely go up a little, but even if it doesn’t how many guys with 30 home run upside are generally around in the 21st round? Somehow Nunez is typically there. You might not want him as your starting first baseman, but he is an ideal corner infielder or an amazing bench option.

Jesús Aguilar , Miami Marlins (ADP: 383 overall). This one will be a total flier, but there is some good history here. Aguilar didn’t get much opportunity in the Majors until 2017 when he hit 16 home runs and drove in 52 runs in just 279 at-bats for the Brewers. He completely broke out the next season when he crushed 35 bombs and drove in 108 runs in 2018. The proverbial wheels fell off for Aguilar last year as he had just eight home runs in 222 at-bats before being traded to the Rays at the deadline. He still didn’t shine, but Aguilar did hit four home runs in 37 games for Tampa. He goes to Miami that has a cavernous ballpark, even if they did move the fences in some. He is a big boy at 6’3” and 285 pounds, so deeper fences shouldn’t be a problem for Aguilar. There aren’t many other competent hitters for the Marlins, which will limit his RBI potential, but if he has his mechanics worked out he should be swinging for the fences most of the time. Aguilar is a free space at the end of your draft with a chance to supply you with great power. Even if you don’t decide to draft him, keep an eye on him early and if he gets off to a good start make that waiver more quickly.

MLB Corey Seager (back) out of lineup again Monday

MLB Devers out of lineup Monday due to sore ankle

A. Simmons - SS
LAA
Mike Clevinger will not make his scheduled start Tuesday against the Cubs after violating health and safety protocols this past weekend in Chicago.
Clevinger reportedly went out in Chicago on Saturday night with fellow Indians starter Zach Plesac, who had to take a rental car home from Chicago once word of his violation came to light. Clevinger, like Plesac, will be quarantined for 72 hours and tested daily. Adam Plutko is going to take the mound in his place on Tuesday versus the visiting Cubs. Clevinger could slot back in this weekend in Detroit.
Added 7:32 pm (EST)
Added 7:32 pm (EST)

A. Simmons - SS
LAA
Andrelton Simmons (ankle) has resumed baseball activities, per Angels manager Joe Maddon.
Maddon added that the 30-year-old shortstop is "nearing a return" but refrained from laying out an exact timetable. Simmons was placed on the injured list back on July 28 after suffering a left ankle sprain while trying to leg out an infield single in a game against the Athletics. He could be around a week away from activation.
Added 7:26 pm (EST)
Added 7:26 pm (EST)

J. Rodriguez - RP
LAA
Angels designated RHP Jose Rodriguez for assignment.
Rodriguez was optioned out last Thursday with MLB requiring teams to shrink their active number of players from 30 to 28, and now he will hit the waiver wire. The 24-year-old right-hander boasts a 2.53 ERA in 21 1/3 career major league innings, but he has struggled with command at every level of baseball.
Added 7:08 pm (EST)
Added 7:08 pm (EST)

J. Suarez - SP
LAA
Angels activated LHP Jose Suarez from the 10-day injured list; optioned him to their alternate training site.
Suarez is recovered from whatever ailed him during summer camp workouts -- he was on the IL for "undisclosed reasons" -- but the Angels will wait to add him to the active 28-man major league roster.
Added 7:06 pm (EST)
Added 7:06 pm (EST)

C. Edwards Jr. - RP
SEA
Mariners manager Scott Servais said he's hopeful Carl Edwards Jr. (forearm) will be ready to resume throwing "in a couple of weeks."
Edwards landed on the injured list Monday after being diagnosed with a right forearm strain, but it's apparently not overly severe. The 28-year-old had delivered a 1.93 ERA, 0.64 WHIP, and 6/1 K/BB ratio through 4 2/3 innings of work this season out of the Seattle bullpen. He also earned a save on August 5.
Added 6:44 pm (EST)
Added 6:44 pm (EST)

T. Gore - RF
LA
Dodgers sent OF Terrance Gore outright to their alternate training site.
Gore was designated for assignment by Los Angeles at the end of July and ultimately passed through waivers unclaimed. The 29-year-old speedster is a career .224/.325/.284 hitter in the major leagues.
Added 6:14 pm (EST)
Added 6:14 pm (EST)

R. Laureano - CF
OAK1
Ramon Laureano is in the Athletics' starting lineup on Monday night against the Angels.
Laureano is likely facing a lengthy suspension after charging the Astros' dugout on Sunday afternoon, but there has yet to be an announcement from MLB in that regard, and he'll probably appeal anyway. Laureano is starting in center field and batting second for the A's on Monday versus the Angels and right-hander Julio Teheran.
Added 6:07 pm (EST)
Added 6:07 pm (EST)

A. Nola - C
SEA1
Austin Nola (wrist) is back in the Mariners' starting lineup Monday.
Nola will start at catcher and bat fifth against the Rangers and right-hander Kyle Gibson after missing Sunday's series finale versus the Rockies because of some minor soreness in his left wrist.
Added 6:01 pm (EST)
Added 6:01 pm (EST)