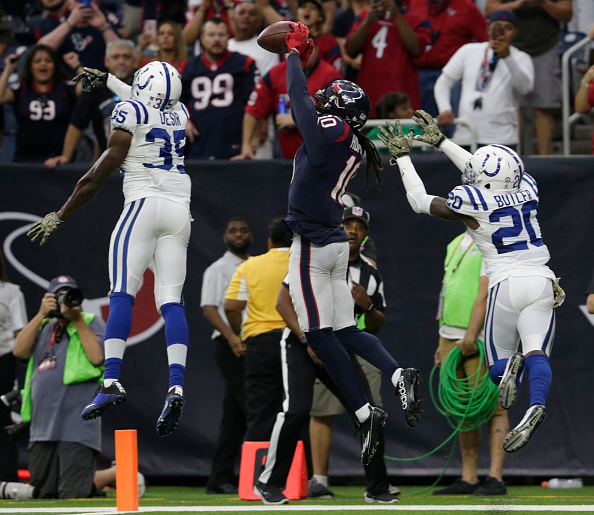 It was mostly an underwhelming offensive show in Week 9 except for the few teams that blew out their opponents. With that being said, I was still able to dig up a few guys for each category that produced well enough to be mentioned. Now that a bulk of the bye weeks are behind us, as well as the trade deadline, teams should be able to settle into more of a rhythm down the stretch. 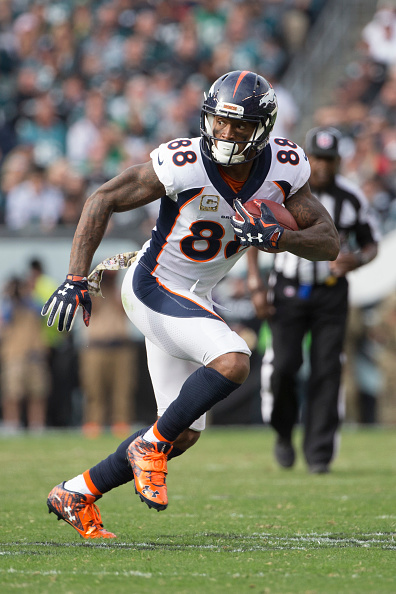 Demaryius Thomas - Thomas accounted for half of the six red zone attempts Brock Osweiler had in Sunday’s blowout loss to Philadelphia. The three targets in a single game is a season-high for the stud wideout in Denver. The other good news is that he finally caught up to Emmanuel Sanders for the tie in the team-lead with seven targets a piece. DT caught all three of the passes his way and scored on one of them, meaning he’s caught four of the seven but this was his first red zone score of the season.

DeAndre Hopkins - There was concern about the effectiveness of Hopkins once Deshaun Watson went down with the ACL tear, but those questions were answered in Week 9. Of the five attempts that Tom Savage mustered against the Colts, three of them came Hopkins’ way with him grabbing one of them. This was just the second time all season he’s had three targets in a game, the other coming against Jacksonville in Week 1. It was also the first time he’s missed two red zone targets in a single game as well. He leads the team with 11 on the season (the next closest has three) and that should continue since Savage has thrown 34% of his career pass attempts in Hopkins direction.

Marqise Lee - Most people like to rag on “garbage time Bortles” and the woeful passing attack he seems to orchestrate. However, this week it gave Lee the chance to post a three-target game for the first time all season. In fact he came with just three targets all season and now has six after his effort against Cincinnati. Lee caught two of the passes on Sunday, including one for a score. He now has a 50% catch-rate on the season which is an improvement. The downside is the offense he plays in just doesn’t get him too many looks.

Cole Beasley - Beasley tied for the team-lead in targets in the red zone on Sunday but was very effective with the looks. The two balls he saw thrown his way were both caught and both went for scores. Beasley is still third on the team in targets on the season, behind Dez Bryant and Jason Witten, but is ahead of them in catch-rate and has scored every time he’s caught a pass inside the 20.

Travis Kelce - Alex Smith only had three passing attempts inside the Cowboys 20 on Sunday afternoon, but two of the three went in Kelce’s direction. He caught both of them and scored on one giving him his fourth red zone score of the year. He’s now had three multi-target games this year and should see more down the stretch as teams try and shut down Tyreek Hill more.

Eric Decker - Decker has been known as a red zone threat since coming into the league with Denver and that continued with the Jets. Now with Tennessee, that trend has continued. He had two targets against Baltimore and caught both of them including one for a touchdown. He is tied for the team-lead with Rishard Matthews at six a piece, but Decker has caught more passes and has been targeted on 50% of the team’s attempts inside the 10 yard line.

Ones to watch for 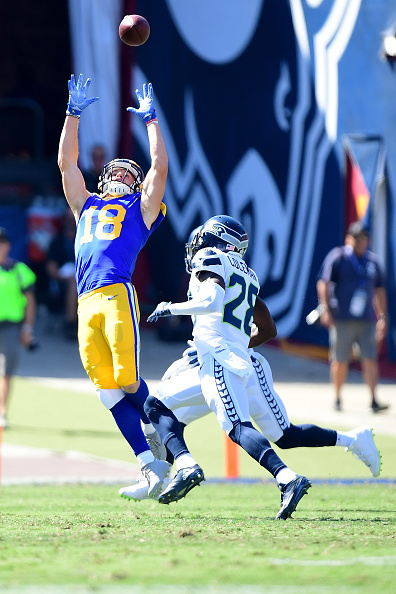 Marvin Jones Jr. - Jones has been on a serious hot streak of late with at least six catches in each of his last four games played, and during that time the red zone targets have come too. He had just one target between Week 1 and  Week 5. Since Week 6 (Saints), he’s seen nine balls thrown his way inside the 20. Against the Packers in Week 9, he was targeted twice, catching one for an 11-yard score. Matthew Stafford seems to have found his favorite target and with the red zone looks coming too, there’s little reason not to play him.

Cooper Kupp - Kupp has been talked about quite a bit this season, but not necessarily with regards to his work inside the 20. He is tied for third in the league with 13 red zone targets, behind only Jimmy Graham (15) and Dez Bryant (14), and tied with Davante Adams. On Sunday against the Giants Kupp received two targets, and caught one. However the reason he is in this section is his last month and change. Since the calendar turned to October, he’s got 10 RZ targets and two touchdowns. Goff has found a groove and keeps looking Kupp’s way at the end of the field.

Evan Engram - The Giants offense was clearly a disaster in the blowout loss to L.A. but that didn’t stop Engram from producing. He’s only seen one target come his way each of the last three weeks, and five total on the season, but he’s caught each of those three for touchdowns and has five catches on the year. The rookie TE is clearly making a difference for Eli Manning near the end zone, and as long as he keeps producing, and getting the looks (though preferably more than one a game), he’s worth keeping in the lineup week in and week out.