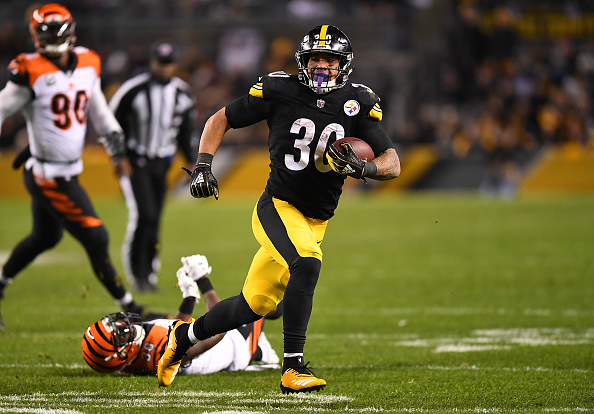 Welcome to the thirteenth edition of the RB previews! This week we are going to take a look at the biggest ADP changes (using the NFFC) from May to June and analyze why their ADP may be changing. Keeping up with trends is very important for a fantasy player, because if you simply look at a player’s overall ADP it may cost you your chance to land someone you want. Without further ado, let’s dive in!

Miles Sanders (Eagles) – Sanders had a May ADP of 12.2, but his June ADP is 9.6. Quite the leap. I really don’t get this jump at all either. Back in April I wrote about how I felt like Sanders was being overvalued in drafts and that he would be someone I would avoid. Now he’s going in the top-10 and that’s just crazy to me. Sanders is a good player, no doubt about that, but we have seen how his coach (Doug Peterson) operates, and that is with multiple backs. The Eagles haven’t had a single running back rush for over 850 yards since Peterson took over in 2016. That’s enough evidence for me to worry about just how much volume Sanders is going to get. You will not see me draft Sanders in the first round in any of my drafts.

Kenyan Drake (Cardinals) – Drake has seen his ADP jump from 14.8 in May to 11.8 in June. I can get behind this movement and I would still feel comfortable taking Drake here. We saw upside, volume, and massive fantasy scoring from Drake after he was traded to Arizona last year. There is a bit of a risk here, but if he can continue to perform the way he did in the final eight games last season, he will hit value at this pick slot. I would prefer Drake over Sanders personally and you have a better chance at landing Drake based on their current ADPs.

James Conner (Steelers) – Conner’s ADP has changed a lot, going from 42.5 in May to 36.5 in June. Not really sure I understand the big movement up for Conner here. I don’t overly love Conner personally, as he has had injury issues and he is coming off a really poor season, but this ADP is still fine (as long as it doesn’t rise anymore). If given the choice between Conner and Bell (similar ADP), I would take Bell, but I can understand why others would go the other direction and hope for a return to 2018 form for Conner, now that Big Ben is back.

Kareem Hunt (Browns) – Hunt had a May ADP of 66.3, but that has jumped in June to 58.9. I can get behind this movement in PPR leagues and, in fact, I took him at 53 in a draft recently. Hunt will only be used as a change of pace in the ground game (barring an injury to Chubb), but he will score plenty of fantasy points as a receiver and could be viable on a weekly basis. He racked up 37 receptions, 285 receiving yards, and a touchdown across eight games last season and added in 179 rushing yards and a pair of touchdowns. There is also chatter from the Browns WR coach Chad O’Shea that Hunt could be used as a wide receiver a good bit this season too, which would only further his fantasy upside.

Dalvin Cook (Vikings) – Cook’s May ADP was 4.7, but it has fallen to 5.8 in June. Looking even more specifically, since the Cook contract dispute chatter popped up on June 9th, Cook has an ADP of 6.4. This makes sense and personally I would have a tough time drafting Cook in the top-five right now, despite having him number four on my board. I didn’t draft Bell in 2018, I didn’t draft Gordon in 2019, and I probably won’t draft Cook in 2020 unless something drastically changes. It’s just a massive risk that isn’t necessary and that makes me uncomfortable for my first round pick.

D’Andre Swift (Lions) – Swift has seen his ADP fall from 46.1 in May to 54.7 in June. This trend makes complete sense to me and I am not really sure why his May ADP was that high. I probably still won’t take Swift even at his June ADP. The Lions have shown (over the past couple years) that they do not know how to use their backs very well and Kerryon Johnson is still going to get some touches. He has some upside, but I just don’t have much faith in the Lions.

Ke’Shawn Vaughn (Bucs) – Vaughn’s ADP in May was 70.6, but it has dropped considerably; his June ADP currently sits at 79.7. It appears that fantasy players are losing steam on Vaughn and are no longer so sure that Vaughn will dominate the Bucs backfield. RoJo is still going to get a lot of work and this backfield could be a messy with neither back being all that great. I am okay with taking a shot on Vaughn at his new ADP, but I wouldn’t be overly excited about it.

Phillip Lindsay (Broncos) – It appears people are more and more considering Lindsay a backup and less of a timeshare back. His ADP has dropped from 106 in May to 113.8 in June. I will be taking a shot on Lindsay at this ADP. Gordon missed at least four games due to injury in three of his first four seasons and Lindsay is a better ball carrier than Gordon. I can’t get behind Gordon being a top-30 pick while Lindsay is at 113. I will have zero shares of Gordon.