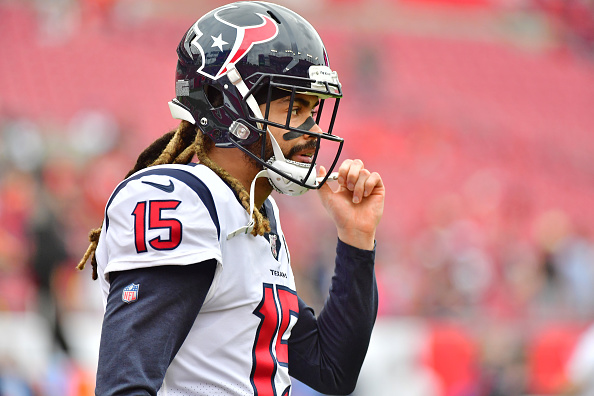 Texans wide receiver Will Fuller announced on his Instagram page this afternoon that he has been suspended six game for violating the leagues drug policy stemming from what he says was medication prescribed to him that was on the leagues banned substance list.

Fuller was having a career season as the Texans top receiver having caught 53 passes for 879 yards and eight touchdowns through 11 games this season. Fuller was coming off a monster Thanksgiving Day performance in Week 12 against the Lions which saw him catch six passes for 171 yards and two scores.

With Fuller now out of the lineup the Texans have a big gap to fill but so do the fantasy players that had Fuller on their roster and were getting WR1 type production. Let’s take a look at some options that fantasy players should be looking to pick up.

On the Texans Already

Keke Coutee - Coutee has played just three games this season, totaling six catches on nine targets for 38 yards and a touchdown. Fantasy players are no stranger to Coutee as he has been on the roster since 2018 and has often been used in place of Will Fuller when Fuller was injured in past seasons. Coutee definitely has some upside and likely jumps to the top of many waiver lists this season. As it stands right now is owned in just 0.3-percent of ESPN leagues and 1-percent of Yahoo leagues.

Steven Mithell/Isaiah Coulter – Who?? Yeah, so neither of these two have caught a pass this season, in fact, Coutler has yet to be active for a game. That said, one, if not both will likely see some playing time moving forward. Coulter was a fifth-round pick of the Texans this season while Mitchell has been with the team since 2018, having caught two passes on six targets over five career games. Mitchell was active for the Texans Thanksgiving game win over the Lions, playing 14-percent of the offensive snaps but did not see a target.

Jordan Akins – Yes, I know Akins is not a wide receiver, but he is the team’s top receiving tight end. Akins laid a goose egg on Thanksgiving, catching zero passes on two targets but he has had some big games this season, notably Week 11 when he caught five passes for 83 yards against the Patriots and Week 2 when he caught seven passes for 55 yards against the Ravens.

Michael Pittman, IND – Yes, I know Pittman was a top waiver claim last week but his ownership still sits below 50-percent in most platforms. Pittman struggled against the Titans, catching just two passes for 28 yards but he was targeted nine times. Up next is another soft matchup against the Texans.

Deebo Samuel, SF – I’m sure many of you are reading this and saying that Samuel is not available in your league but that’s not the case in nearly half of standard leagues on the major platforms where his ownership sits between 50-to-60-percent. If you are lucky enough to be in the 40-percent of leagues where he is on the waivers you should be picking him up this week after he torched the Rams for 133 yards on 11 catches in Week 12.

Nelson Agholor , LV – The Raiders offense was horrible in Week 12 but Agholor still pulled off five catches for 54 yards. In Week 13 they get the “slump busters” in the New York Jets. Over the last three weeks Agholor has seen 19 targets.

Denzel Mims, NYJ – Mims has seen eight targets in three straight games. It seems to matter not who is under center for the Jets as he is going to get the volume over the final weeks of the season. One of these weeks he is going to have himself a big touchdown play and a matchup against the Raiders in Week 13 could provide that opportunity.