Joe Gallina gives you the latest MLB injury news, how long the players should be out, and how it should alter your draft strategies. 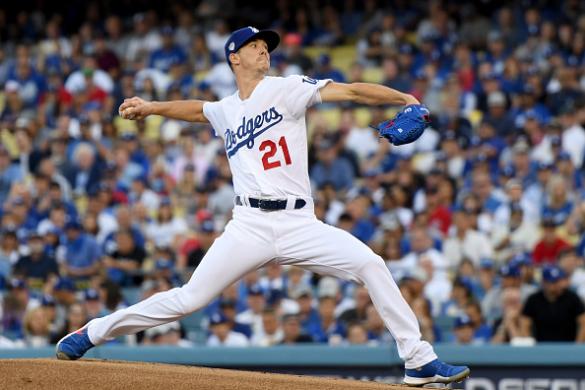 It’s been relatively quiet on the injury front this week. Unfortunately COVID-19 reared its ugly head once again, forcing the postponement of Sunday’s A’s-Astros game after a member of the A’s organization tested positive for the deadly virus. MLB announced that the cancellation was due to an “abundance of caution”.

This week’s injury report isn’t as star studded as in the past, but there are a couple of Yankees on it. We can’t have an injury report without there being a Yankee or two on it! Let’s take a closer look at some of the injuries that we fantasy players will have to work around as we head into the upcoming week of the 2020 MLB season.

Buehler was placed on the 10 day IL due to a blister on his pitching hand. The move was retroactive to last Sunday August 23rd. He threw a 30 pitch bullpen session this past Saturday and it appears as if his stay on the IL should be a short one.

Unfortunately Kelly’s 2020 season is likely over. He was placed on the IL last Monday due to a nerve impingement and underwent surgery on Tuesday to remove a blood clot from his right shoulder. Kelly had been a reliable starter for the Diamondbacks, posting a 2.59 ERA and 0.989 WHIP this season.

Eovaldi was placed on the 10 day IL with what is considered a mild calf strain. He is not expected to be on the IL for very long. Zack Godley filled in for Eovaldi on Sunday and gave up five earned runs in 4.2 IP. Chris Mazza was recalled from the Red Sox’s alternate site in a corresponding move. Unfortunately he doesn’t have much fantasy value. The Red Sox’s starting rotation has been a mess all season long.

The White Sox placed Gonzalez on the 10 day IL due to a strained right groin. Gonzalez has a 5.11 ERA and a 1.865 WHIP. He doesn’t have much fantasy value. However in a corresponding move, the White Sox called up Dane Dunning from their alternate site. Dunning has a minor league career 10.2 K/9 and 2.4 BB/9 and he pitched five shutout innings against the Royals on Sunday, striking out seven and walking one. Dane Dunning needs to be on your watch list.

Last week we reported that the Pirates claimed they were being overly cautious in removing Kela from a Friday night appearance (August 21st) due to forearm tightness. Apparently their caution was warranted. Kela was placed on the IL this week. Richard Rodríguez will fill in as the Pirates’ closer moving forward.

Moran was placed on the 7 day concussion IL this week. He’s been playing some third base, but more first base than was originally expected this season. First base prospect Will Craig, who hit 23 home runs and drove in 78 runs for the Pirates’ Triple-A affiliate, was called up in a corresponding move.

Last week we reported that the Yankees were expecting Torres to miss two to three weeks as he recovers from grade 1 strains in his hamstring and quadriceps. This week Yankees GM Brian Cashman suggested that Torres may miss closer to three to six weeks of the season, which means there’s a chance he might not return to action until the last week of the season. Tyler Wade and Jordy Mercer have been filling in for Torres this past week.

You may want to think twice before putting Semien in your starting lineup this week. Semien wasn’t in the A’s Saturday night lineup after complaining of feeling pain in his left side. He underwent an MRI which came up clean and while he’ll likely avoid the IL, he may be forced to miss a game or two. With the A’s trading away backup shortstop Franklin Barreto this past weekend if Semien were to miss time this week, Chad Pinder could be called upon to sneak in a start at shortstop. The A’s could also promote Sheldon Neuse and have him fill in for Semien as well. Matt Chapman got his first big league start at shortstop on Saturday night. Another reason to possibly avoid starting Semien this week is that as this article is being written there’s a possibility that one or more upcoming A’s games could be postponed because a member of the A’s traveling party tested positive for COVID-19.

Fletcher sprained his ankle while running down the first base line on Sunday. The sprain is considered relatively minor. Fletcher, who was starting at second base on Sunday, was replaced by Luis Rengifo . The newly acquired Franklin Barreto could receive regular ABs should Fletcher be forced to miss time.

You might want to keep Turner out of your season long lineups this week. He wasn’t yet officially placed on the IL as this article was being written, but Dodgers manager Dave Roberts told reporters that Turner suffered a “low-grade strain” of his hamstring and that it didn’t appear to be “a one-day thing”. According to Roberts, the earliest he might be able to return to the Dodgers lineup would be Tuesday, and possibly as a DH. Multi-position eligible Max Muncy filled in for Turner at the hot corner this past weekend.

Check on Moncada’s progress before putting him in your season long lineup this week. He’s been bothered by nagging “irritation” in the back of his left leg and he aggravated it in the ninth inning of Saturday’s game. He is considered day to day.

Judge was activated from the IL this past Wednesday…and was placed right back on the IL on Friday after he reinjured the same calf that caused him to hit the IL in the first place. Judge required a minimum stay on the 10 day IL the first time around, but his latest setback could keep him out of action until mid-September. The Yankees called up highly regarded outfield prospect Estevan Florial to fill Judge’s spot on the roster but have since sent him back to their alternate site. He had one hit in three at-bats in his big league debut. Clint Frazier and Mike Tauchman will continue to see regular ABs with Judge and Giancarlo Stanton both on the IL. Who knows, maybe by the time you read this article the Yankees would have already completed a trade for Diamondbacks outfielder Starling Marte .

R. Healy - 3B
MIL
Brewers sent INF Ryon Healy outright to Triple-A San Antonio.
Healy actually batted cleanup for the Brewers in one of his two starts, but he finished with just one hit in seven at-bats during his time with the big club. It's been years since the 28-year-old showed an above-average ability with the bat, but perhaps he'll find a major league job this winter with MLB clubs focused more on cost savings than actually putting a winning product on the field.
Added 8:43 am (EST)
Added 8:43 am (EST)