Dan Malin examines some catchers that could spring forward and improve on last season's numbers as well as some that could regress and fall back. 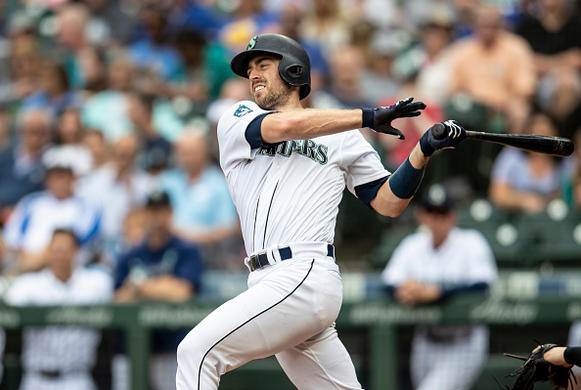 It is the changing of the seasons as we approach warmer weather and Opening Day. With Daylight saving time beginning over the weekend, we’ve all adjusted to a bit of a later sunset. It’s the old spring forward, fall back routine. So it seems like an appropriate time to present a little breakout or bust article as the 2020 MLB season draws closer.

Omar Narváez (MIL) – Spring Forward: I’ve been on the fence a bit about Narvaez. I could see scenarios where he regresses, yields the same results, or succeeds in a new ballpark. ATC, Steamer, and ZiPS all project him to regress from his breakout season last year in Seattle. I’m of the mindset he could do very well in Milwaukee. In his lone season in Milwaukee last year, Yasmani Grandal hit 28 home runs with a 45.4% hard hit rate. Now even last year, Narvaez only boasted a 29.8% hard hit rate and yet still hit 22 home runs for the Mariners, with 13 of them coming at home. Narvaez just turned 28 and if he can improve on the hard contact just a little more then he could do quite well in Miller Park, which caters to left-handed power.

Mitch Garver (MIN) – Fall Back: By all accounts, Garver’s breakout season in 2019 checks out. He saw more playing time and increased his exit velocity (to 91.1 mph) and hard hit rate by 6.8% (to 47.3%). He did all this in 359 plate appearances with a stellar .357 ISO. That’s just an incredibly high rate; among hitters with at least 350 plate appearances, Garver had the highest ISO, even edging out Mike Trout . Prior to the 2019 breakout, Garver had just seven home runs, 43 RBI, and 48 runs scored in two seasons. Then last year he dished out 31 dingers, 67 RBI, and scored 70 runs without registering 400 plate appearances. An increase in playing time may aid him in 2020 because he stills plays in a hitter-friendly ballpark when it warms up in the Summer. However, I’ll say that he regresses based on his batted ball data from last season being such an outlier. He can still produce with 20 home runs and a .470-.490 slugging percentage, but I would be surprised if he hit 30 home runs again.

Tom Murphy (SEA) – Spring Forward: Everything about Murphy makes me want to believe he’ll regress and fall back. His minimal playing time with the Rockies and Coors Field for a few seasons yielded minimal results. In his first season in Seattle, with more playing time, he hit .273 with a .535 slugging percentage and 18 home runs. He did all that in 281 plate appearances where he was still second fiddle to the previously-mentioned Omar Narváez . Murphy will turn 29 in about a month so he’s a bit of a late bloomer. However, given that he’s in line for a significant amount of playing time he could improve even further on his numbers from last year. His strikeouts and lack of success against right-handed pitchers are a little concerning, but even the slightest improvement against RHP’s could lead to good things for him in 2020.

Yasmani Grandal (CHW) – Fall Back: It does pain me to write this. I don’t think the regression will be as drastic as say, maybe Mitch Garver ’s. Grandal has been my starting catcher in most fantasy leagues the last two seasons. He has at least 15 home runs in each of his last six seasons with at least 22 home runs in four straight seasons. The lineup around him is still pretty good in Chicago. My biggest concern is the motivation. He signed a four-year contract for $73 million in the offseason after chasing a pay day the last few seasons. I just don’t know if the motivation is there coming off a career year where he set career-best marks in home runs, runs, RBI, steals (albeit he only stole five), walk rate, and plate appearances. That last one is a big one. Last year was the only time Grandal logged more than 520 plate appearances, and he managed 632. In most seasons he’s missed a few games here and there so I do expect him to miss a little more time this season and the volume of opportunities may not be there for him this year. It may be a little ballsy, but at age 31 he will take steps backward.

Danny Jansen (TOR) – Spring Forward: Jansen had a rough go of it in his rookie season. He slashed .207/.279/.360 but did club 13 home runs to his credit. So there really is nowhere for him to go but up so he’s an easy spring forward candidate. His 40% hard contact rate is still decent and he had an 88.7 mph exit velocity in his first full season. He had some plate discipline issues, but the fantasy community always recommends treading lightly with rookies. That stands true, even more so with rookie catchers. Jansen still gets to play in the Rogers Centre, which has nice alleys and performs well for hitters. He’s also in a pretty talented young lineup to which he contributes and should improve nicely on his rookie numbers. It’s also pretty nice that he’s dirt cheap in fantasy baseball drafts as well.

Christian Vázquez (BOS) – Fall Back: As a Red Sox fan it does hurt to list Vazquez as one who could fall back. Vazquez saw a significant increase in plate appearances with 521 last season and he set career highs in home runs, RBI, and runs scored, slugging percentage, and ISO. Coming out of spring training a year ago he had a lot going for him. The Red Sox had a three-headed monster at catcher with Vazquez, Sandy León , and Blake Swihart all in the mix. It was clear the Red Sox wanted him to be the starter and early in the year they DFA’d Swihart and Sandy León was given modest playing time. So, opportunity presented itself to Vazquez and he took advantage, and it’ll still be there for him in 2020. In 2019 his exit velocity and launch angle saw modest improvements, as did his hard-hit rate. That sabermetric jumped to just 33.6%, which was a career high for him and even at a pedestrian rate like that he was fortunate to hit 23 home runs. ATC, Steamer, and ZiPS all project him for under 15 home runs with regression in batting average and slugging percentage. That seems about what fantasy owners should be expecting from Vazquez in 2020.

Jorge Alfaro (MIA) – Spring Forward: This might be surprising considering Alfaro hit 18 home runs for the Marlins last season, but he could hit 20+ in 2020 even in Marlins Ballpark. It seems like every offseason, or every other offseason, the Marlins try to make their ballpark a little more friendly to hitters. This past offseason they moved center field in by about seven feet and they moved the right field fences in about five feet. In the past five years they’ve also lowered the fences as well. 11 of Alfaro’s 18 home runs last season came on the road, but he still had a respectable .288 batting average at home. He had a 50.4% hard hit rate at home with a solid 90.8 mph exit velocity. The downside was the launch angle (4.7 degrees), which obviously has room for improvement. He also touted a 33.1% strikeout rate compared to a 4.7% walk rate so he’s dreadful in points leagues. However, Alfaro still has room for improvement and despite the negatives he still had 18 home runs while hitting pretty well at home. I’ll roll the dice and say he improves this year even if he struggles a bit in April. And if it doesn't pan out, at least he has great hair. Just look at that flow!

Salvador Pérez (KC) – Fall Back: Obviously there’s no way Perez can fall back and regress based on his 2019 production because there wasn’t any. He had to undergo Tommy John prior to the 2019 campaign and unfortunately missed all of last year. Here’s what I do like about Perez this year; the Royals may look to start him at first base early on in the season. This would be smart since it would be a good spot to ease him back into the swing of things, so he isn’t over utilizing his right arm, which is the one the procedure was performed on. Even in 2018 when he did have 27 home runs and 80 RBI he still only hit .235 with a .713 OPS. Perez won’t be awful. If he’s starting at first base early in the year then he’ll be in better shape than going back behind the plate. I do believe it could be a rough start out of the gates for him this year, so I believe he’ll fall back from his 2018 numbers.

Francisco Mejía (SD) – Spring Forward: By all accounts, an increase in playing time will be beneficial to Mejia in 2020. The San Diego lineup should be better and they should try to put their best hitters out there. And that would mean playing Mejia more than Austin Hedges . Mejia is still relatively young. He turned 24 last October and still has room for development as a hitter. Hedges is 27 and seemingly regressed as a hitter last season where he slashed .176/.252/.311 with a 31.4% strikeout rate. And it’s a pretty simple formula for the Padres backstop situation. Mejia is the better hitter, while Hedges is better defensively. I’m not overly concerned right now with Mejia’s poor start to spring training. It’s still likely that he earns most of the playing time for the Padres. To what length he breaks out is a bit of a mystery because his lack of defensive prowess could impact his playing time. But if he does show improvement at the plate then 15-20 home runs could be in his sights for 2020.