Fantasy Baseball Waiver Advice: We have Kiri Lift Off 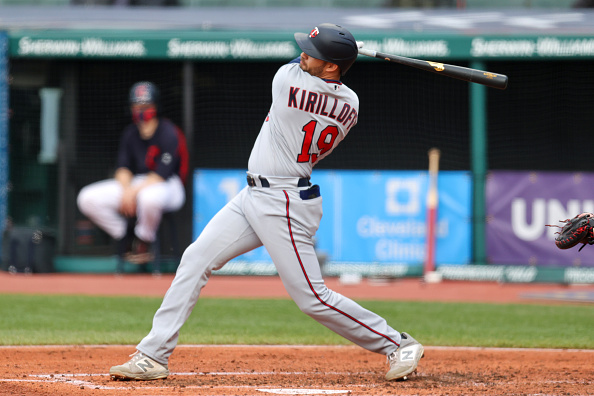 Andrew Benintendi (KC) FAAB Bid: 5-7% – I do recall a couple weeks ago recommending Benintendi when he started running more, but the average still sucked. However, as fate would have it, he’s seeing the ball better at the dish. He clubbed two dingers on Saturday and had a multi-hit game on Sunday and he’s raised the batting average to .273. He’s only available in shallow leagues, but it looks as if he’s shaken off the slow start. On a side note, he was caught stealing on Sunday but at least the Royals are allowing him to try to swipe some bags.

Alex Kirilloff (MIN) FAAB Bid: 4-5% - Through seven innings on Sunday the Twins have put up ten runs and Kirilloff is 0-for-3. Don’t be too discouraged because he crushed three home runs in his previous two games. He got off to a very cold start, but he’s a rookie. You can’t expect everyone to come up as Mike Trout did and rake right away. But the prospect pedigree is still fairly elite and we saw it on full display early in the weekend. He’s worth a prospective add to see what happens.

Tyler O'Neill (STL) FAAB Bid: 3-5% - This could easily be a player you drop in two-to-four weeks, but he’s absolutely raking at the dish lately. Since last Sunday he’s hitting .407 (not including the two hits he got on Sunday) with four home runs, seven runs scored and seven RBI and a pair of steals since April 25th. This is the ultimate “strike while the iron is hot” play so get in while the gettin’ is good. If he cools off then afford him a little patience and see how things shake out. But he’s a pretty easy add right now in 12-team leagues or deeper.

Nico Hoerner (CHC) FAAB Bid 2-4% - For what it’s worth, Hoerner’s approaching his at bat’s incredibly well right now. He has three stolen bases in his last four games with five multi-hit games over the last ten days. The Cubs have been planting him in the bottom third of the order, but you just have to deal with that. He’s still basically a prospect as he turns 24 in less than two weeks, but he’s exhibiting fantastic patience at the plate and does possess stolen base upside.

Madison Bumgarner (ARI) FAAB Bid: 5-7% - It’s been a tale of two MadBum’s so far this season. He starts the year off giving up 17 earned runs in 13.2 innings of work. Then over his next 17 innings he gives up two earned including a seven-inning no-hitter last weekend against the Braves. The fastball velocity isn’t up dramatically, but in comparison to his first three starts it’s up about two miles per hour and he’s using it a bit more. He gets a very tempting road start on Thursday against the Marlins, followed by a home start next Tuesday against the Fish once again.

Kyle Gibson (TEX) Bid: 5% - Admittedly, I’m not his biggest fan and he doesn’t have the greatest strikeout upside. But here are the positives: he pitches deep (good for quality starts leagues), his ratios are pretty damn good, and he gets two starts this week. One of those starts will have the revenge game narrative against the Twins and then he takes the mound against the Mariners late in the week. If you take away his debut in early April he touts a 0.82 ERA and a sub-1.00 WHIP on the season.

Shane McClanahan (TB) Bid: 3-4% - I usually lean on the conservative side of FAAB bids in fantasy baseball mostly because I don’t play in leagues with FAAB budgets. But 3-4% could either be too much or not enough. The rookie southpaw looked great in his debut with the Rays on Thursday. He didn’t walk anyone and he struck out five in four innings of work. His fastball averaged 97.5mph, nearly eight mph above his changeup so that’s solid velocity separation. On a more absurd note he generated 15 swinging strikes on just 59 pitches. That’s mostly due to the fact the Athletics didn’t have much research on him and even the most professional organizations can fly a little blind into a matchup. Regardless, McClanahan gets a pair of road trips in the coming week against the Halos and A’s. It is worth mentioning that Tampa may not let him pitch incredibly deep so I wouldn’t target him in leagues that reward for quality starts. But if he’s floating on waivers in leagues that reward wins then he’s a viable pickup and you hope he tosses the stitching for five innings.

Josh Staumont (KC) FAAB Bid: 10% - The FAAB bid is completely dependent on your league’s settings, I should add that as a disclaimer each week. Staumont’s recorded a save in three straight appearances with eight strikeouts in his last 5.2 innings of work. I don’t need to go too in depth, but he’s under 40% owned at the time of this writing in ESPN formats so grab him while you can if you need saves.

Alex Wood (SF) FAAB Bid: 10-11% - He’s SP/RP eligible and he’s 3-0 in three starts with a 1.50 ERA and 20 strikeouts in 18 innings of work. Sure, he’s probably worth mentioning in the starting pitching section, but you know me; I love targeting reliever-eligible pitchers getting starts, especially in points leagues. The danger with Wood this week is that his next start is coming in Coors, but for the following week he’s looking like a two-start pitcher with a home matchup against the Rangers and a date on the road with the Pirates.

Rafael Dolis (TOR) FAAB Bid: 2-3% - Dolis is also a decent pickup for saves. He grabbed his third save of the year on Sunday against the Braves despite the Blue Jays winning by five runs. He came in with the bases loaded and the tying run in the on-deck circle, so it technically qualified as a save and he only needed to record one out. I don’t like him as much as Staumont because the latter seems fairly locked in and Dolis’ BB/9 is still a little high despite getting a little better lately.

Garrett Whitlock (BOS) FAAB Bid: 2% - Possibly the most unheralded relief pitcher in fantasy baseball, but he can still do quite a bit for your team. Whitlock has made six appearances on the year and only one was fewer than two innings. Additionally, he has 19 strikeouts in 14.1 innings of work, but he surrendered his first earned run of the season on Sunday. Either way, he recorded his fourth hold of the season and the ratio stats are appetizing. Does he have a chance at earning saves? Doubtful. He would need Matt Barnes to get seriously hurt or start blowing games in bunches. But in the age of K/BB and K/9, Whitlock’s a tremendous asset.