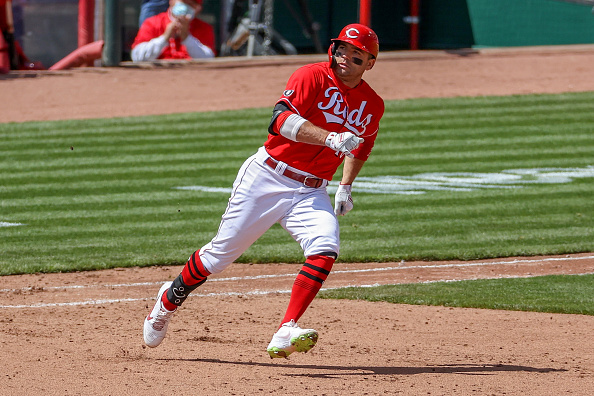 Carson Kelly (ARI) To really simplify what Kelly’s done at the plate, he’s been good. But to really do it justice, he’s been pretty gosh darn clutch. I’m not willing to drop bad words in my articles yet. Check out Gettin’ Buzzed during the NFL Draft if you’re looking for those shenanigans. Although Stephen Vogt still has breath in his body and the ability to crouch down behind home plate and catch, Kelly’s been getting plenty of starts behind the dish and it looks like he’s the exclusive catcher to Zac Gallen. So far through a dozen games, Kelly’s slashing .375/.543/.719 with three home runs (all of which have occurred in the last nine days) and he has an insane 23.9% walk rate (howdy howdy, points leagues). Regression is easily in store. His .344 ISO and 56.5% hard hit rate seem wildly uncharacteristic, but even if the hard-hit rate drops ten percent you’ll still take that from a position lacking great depth. Kelly’s catcher eligible so if you punted the position during your draft this is a good time to jump on a player that’s raking. If you need another catcher to look at, Buster Posey ’s a solid option. He ripped two dingers on Tuesday and his ownership has dropped quite a bit in ESPN formats so he may be available.

Zach McKinstry (LAD) Ownership is quickly on the rise, but McKinstry appeared in this article not too long ago and the big question with him was always playing time. But at this point, with Cody Bellinger dealing with a hairline fracture, Mookie Betts having his own injuries, and Gavin Lux missing some time, there are plenty of opportunities for McKinstry. The downside is he doesn’t walk enough, but BFD. He’s playing in the infield and outfield, he has 14 RBI, he’s hitting .296, he’s still in a great lineup despite all their injuries, etc. He’s doing enough and even if/when the Dodgers get healthy Dave Roberts will probably still try and find ways to get him in the lineup.

Joey Votto (CIN) Votto opened the season hitting .162/.205/.162 across his first nine games. Since then he’s slashing .385/.448/.846 (not calculating his 0-for-4 effort on Wednesday) and he has three home runs and three doubles. He’s touting a 47.2% hard hit rate, which is a career high. That’ll likely regress but it’s good to see his power is back up after he sacrificed some of that in the latter years of his career for more contact, rather than quality contact. He’s always had tremendous plate discipline and once the weather warms up in Southwest Ohio, his power in Great American Ballpark could yield solid results for a waiver wire addition.

Josh Harrison (WSH) Harrison’s by far the biggest speculative add for hitters off the waiver wire today. He made his debut last Monday and has logged a slash line of .429/.500/.607 and he quickly moved his way from the bottom of the order to hitting in the two-hole in back-to-back games. He went 0-for-3 with a walk on Wednesday, but the Nationals as a team only had four hits. This is purely a speculative add for a hot hitter in deeper leagues because this article is mostly littered with shallow league targets at the moment. If he can stick in the top of the order he’s a good, cheap source of runs. Don’t give him a long leash, but let’s see what happens.

Trevor Rogers (MIA) He’s available in about 35% of leagues. Ultimately you should just pray one of these starting pitchers this week is available in your league. Rogers is a superstar in the making and we’re witnessing the breakout firsthand. Entering Wednesday’s matchup against Baltimore, Rogers had a 2.40 ERA with 23 strikeouts in 15 innings of work. Are the walks a little unsightly? Sure, but he’s still young and he’s doing everything else incredibly well. Against Baltimore he tossed seven scoreless innings giving up four hits, one walk, and notching eight strikeouts. Even more impressive? He needed just 82 pitches and he forced 17 swinging strikes. Run, don’t walk, to the waiver wire.

Sean Manaea (OAK) After an incredibly rough season debut against the Astros, Manaea has looked like a completely different pitcher. Over his last 19 innings of work he’s allowed just three earned runs on 17 hits with 18 strikeouts and just two walks. He’s rolling with three straight quality starts with back-to-back wins. Since Oakland dropped seven of their first eight games they’ve rattled off 11 straight wins. That pretty much sums up the Oakland A’s in a nutshell. Manaea’s a two-start pitcher next week against Tampa and Baltimore. The ownership is pretty high and he’s only available in shallow leagues. It doesn’t take a Rhodes Scholar to see he’s one of the best pickups at the moment if he’s available in your league. 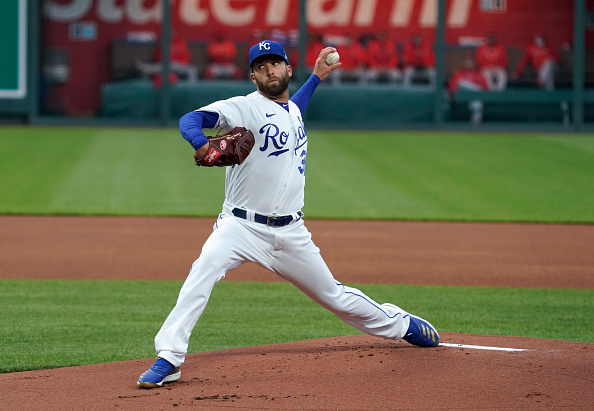 Danny Duffy (KC) On Sunday I aimed to avoid repeat players in the waiver wire article. On Thursday, I just don’t care. Duffy bears repeating. He’s kicked off his 2021 campaign with three straight quality starts and 19 strikeouts in 18 innings of work. He’s inducing swinging strikes at a 13% rate and the velocity is up on his fastball. He gets a road start next week against Detroit, and they easily make for Duffy’s easiest opponent up to this point.

JT Brubaker (PIT) I’m not going to lie, Brubaker has not been a guy that’s been on my radar lately. But among these four pitchers, he’s easily the most available because you probably never heard of him before this month. I get a little nervous with Pittsburgh pitchers. I feel that pitchers get better once the leave Pittsburgh, i.e. Gerrit Cole , Joe Musgrove , Tyler Glasnow , Kris Benson (alright that last one’s a joke). Brubaker’s won his last two starts and he’s pitching deeper into games. His 1.76 ERA is a little worrisome compared to his 3.52 FIP and 3.69 xFIP, but the strikeouts are there (10.57 K/9) and he’s not giving up much hard contact (28.9%). And wouldn’t you know it, his next start comes against Detroit on Thursday followed by St. Louis next week.

There are quite a few different ways we could go with the closer carousel, but I’ll revert to some guys that have been mentioned previously because ownership is still a touch too low.

Emmanuel Clase (CLE) Clase hasn’t pitched this week, but that’s not a huge deal considering he got a save on Sunday and Wednesday’s game against Chicago was postponed due to snow. He will help your strikeout numbers/ratios but I am a little concerned he’s allowed an inherited runner to score in three of his last four appearances. End all be all? Far from it. He has four saves since April 9 and Cleveland will be hosting the Yankees who have lost nine of their last 12 games and have scored just 21 runs in their last eight games. I like to think Clase will have some save opportunities this weekend.

Lou Trivino (OAK) I’m curious how others are reading Trivino. I know A’s fans weren’t surprised with his performance on Tuesday as he allowed two earned runs in 1.2 innings of work. But he was being used in a high leverage situation and the Athletics pulled a rabbit out of a hat for their 11th straight win. Trivino’s last save came last Friday as Jake Diekman got the save in game two of Tuesday’s double-header. I think both are in line for the occasional save and I don’t believe Trivino’s performance on Wednesday will force him out of favor with the organization. He was used for a second straight inning and arguably every pitcher in yesterday’s game between the A’s and Twins had a bad day.

Yimi García (MIA) Garcia’s numbers aren’t necessarily phenomenal, but at the end of the day, he’s getting saves. Since April 10 he’s racked up four and he hasn’t allowed a walk in his last four innings of work. That’s what I want to see from a closer, limiting the free passes. He might be due for a blown save at some point. His 0.87 ERA next to his 3.28 FIP suggests that may be in the cards but he’s getting saves and averaging nearly a strikeout per inning. Playing for the Marlins, the save opportunities won’t be as abundant, but he’s available in almost half of ESPN’s league. Similarly, César Valdez with Baltimore is in a similar situation to Garcia and their ownership numbers somewhat mirror each other. He has four saves on the year (with two wins as well) and the opportunities won’t always be there playing for Baltimore, but again, he represents free saves on the waiver wire.

Stefan Crichton (ARI) Crichton’s a late addition to this piece as I just wanted to throw a fresh name in the article. He got his first saves of the season on Sunday and Tuesday and wasn’t used in yesterday’s entertaining comeback against the Reds (check out the highlights if you missed it). It was one of these kinds of games: 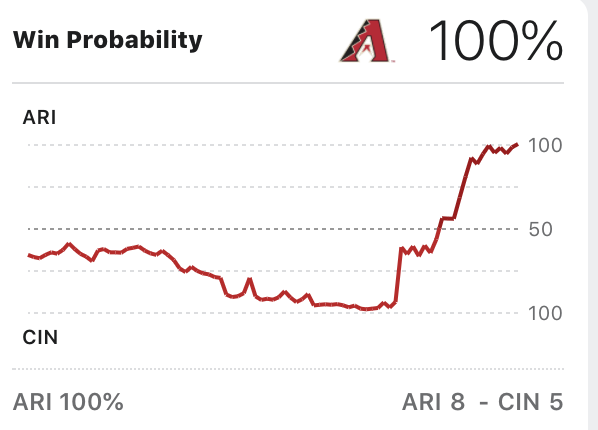 Crichton wasn’t used in that game, but the higher leverage is a pleasant sight. He is prone to walks, which I don’t love necessarily, and the D-Backs are still a subpar team overall. You can pick him up and see how things play out. If Arizona goes with a committee where Crichton’s used sporadically in the ninth inning you can probably cut ties and it won’t cost you anything.