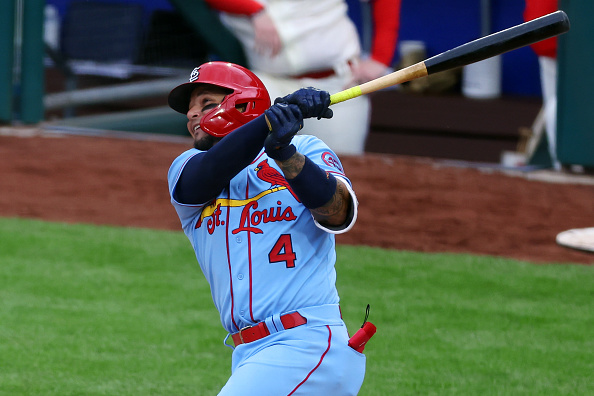 Upon first glance, a lot of the guys I’m noticing that are worth a waiver claim were players mentioned just three days ago. For the sake of not sounding redundant (and not appearing lazy), please reference that link because there are some great players to add off waivers that are mentioned that I won’t be touching on today. I’ll add some new names to the Sunday piece to keep it fresh. Here are the waiver wire suggestions heading into week three!

Yadier Molina (STL) FAAB Bid: 7-8% - Saturday was a big day for catchers, most specifically Molina, who hit a pair of home runs and raised his slash line to .340/.385/.660. He now has four home runs on the young season with ten runs scored and a dozen RBI. He’s also hit safely in all but two games so far this year. At a position lacking depth like catcher, Molina’s a steady player that can contribute.

Andrés Giménez (CLE) FAAB Bid: 3-4% - I’ve noticed people on ESPN starting to jump ship on Gimenez. I get it, the peripherals aren’t great by any stretch of the imagination and Francisco Lindor ’s shoes are tough to fill. The frustration with Gimenez is the Indians love to bury him in the order. He’s led off a couple times this year, but for the most part he’s hit ninth. This isn’t a huge problem because if he gets on base then the top of the order can drive him in. However, for fantasy, when he’s at the bottom of the order that means less at-bats long-term and there won’t always be someone on base for Gimenez to drive in. But let’s hope that he’s maybe turned a corner? On Friday he stole his first base of the season and followed that up with a double and a home run on Saturday. The slash line is still unimpressive but if he becomes available in your league I think he’s worth a look. 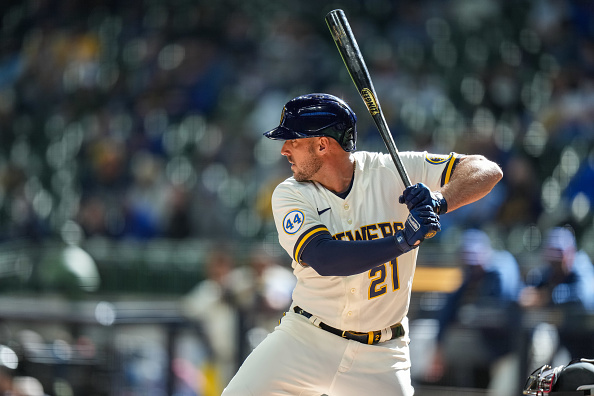 Travis Shaw (MIL) FAAB Bid: 2-3% - Shaw’s stint last year with Toronto seemed like it was maybe just a trip to summer camp as he’s now back with the Brew Crew. The batting average isn’t stellar, but it also won’t kill you. But the power has been on display with a pair of dingers coming in the last week. He’s not going to reach the power levels of 2017 and 2018 where he hit 30+ home runs in back-to-back seasons with Milwaukee. But it’s clear he can put up good numbers and take advantage of Miller Park’s hitter-friendly confines. This isn’t a flashy grab, but if he stays healthy then 20-25 home runs are possible.

Andrew Benintendi (KC) FAAB Bid: 1% - It looks like he’s only available in shallow leagues and I think in most leagues he’s available they could be three-to-four outfielder leagues or points leagues. In no way should you pick him up in a points league. The batting average isn’t there and he’s striking out too much. However, in a head-to-head categories league or roto formats he’s worth a grab because when he has gotten on base the Royals have really turned him loose evidenced by the three steals he collected in the past week. Despite the poor plate discipline, the Royals don’t seem motivated to move him out of the two-hole yet so for the time being here’s a cheap source of steals you can find on waivers.

Matthew Boyd (DET) FAAB Bid: 4-5% - As someone who has recommended (and used) Boyd as a streamer in the past, this comes with plenty of caution. He can absolutely get lit up in any start. I’ve chased the strikeout numbers plenty of times only to get burned. But through three starts, the strikeouts haven’t been there. So what has led to the success? Well he’s never had the most dominant fastball, but his changeup has always had very nice velocity separation. A near 80 mph changeup can still be sent out of the park easily, but it’s fooling hitters at the moment and he’s using it more than previous years. While the strikeout numbers aren’t great Boyd has been an innings eater. His 1.86 ERA looks promising compared to his 2.64 FIP. If you can grab him for Sunday’s start against Oakland, by all means give it a shot especially if you need a pitcher to try and win your matchup today. But I do like the start next Saturday against the Royals as well. Given Detroit’s six-man rotation he won’t see a two-start week as often as other candidates, but the Tigers are comfortable letting him pitch into the sixth inning.

Danny Duffy (KC) FAAB Bid: 3% - There might be a little confusion regarding Duffy’s schedule for the upcoming week. He’s definitely in line to start Monday against the Rays, but it doesn’t appear as if he’ll get a second start this coming week. The Royals have a six-man rotation lined up this week according to their schedule on a few different sites so Duffy’s start against the Tigers will be the following Monday and not this Sunday. Regardless, he’s 2-0 through two starts and he’s only allowed one earned run in 12 innings of work. He might be able to give you a strikeout per inning, but if you’re looking to stream him this week and next, don’t go overboard with your FAAB bid just for a streamer.

Anthony DeSclafani (SF) FAAB Bid: 2% - There aren’t many great pitching options available on waivers, hence the low FAAB recommendations. So again, give Thursday’s article a read for some options that are maybe more reliable. I’ve mentioned DeSclafani in the past as a streamer, but he’s looked very solid to start 2021. Do I think he can keep it up over the course of a full season? No, but I’ve been wrong before. He has 16 strikeouts in 17 innings of work and he’s allowed just four free passes and one earned run. He has some tough matchups coming up against the Phillies (on the road), Rockies (at home, thankfully), and the Padres (on the road). Tread carefully but let’s see what he can do. He’s already faced the Rockies and Padres this year and he did well, but can he do it again now that those division rivals know what to look for?

Joe Ross (WSH) FAAB Bid: 2% - Joe Ross is actually RP-eligible on ESPN so I’d definitely consider grabbing him if he’s available. It seems like Ross has been around for so long and yet, he’s only 27 (turns 28 next month). The numbers won’t amaze you, but he’s only allowed six hits and three walks in 11 innings of work including nine strikeouts. He’s due for some regression, but again, he’s getting starts and you can lock him into a reliever’s spot. Need more incentive? He gets two starts in the coming week against the Cardinals and Mets. Imposing offenses? Sure. But the volume is there and this is a pretty smart pickup in points leagues where volume and innings are key. Just pray he doesn’t get tagged too much.

I would definitely suggest looking into Thursday’s waiver column as well for relief pitching help. As I mentioned at the top, I don’t want to sound like a broken record with the weekend waiver wire so check out the Thursday column for a few more relief pitchers to grab off waivers. Time to discuss some new blood…

Daniel Bard (COL) FAAB Bid: 3-5% - Two things; 1. Daniel Bard isn’t necessarily new blood considering he was in the first waiver article of the season, and 2. Why would I recommend a guy whose coming off a blown save on Saturday and has allowed three earned runs in his last two appearances? That’s a fair question. But ownership is still down on Bard and I don’t think he’s done enough to necessarily lose the opportunity, but I won’t rule that out as a possibility. He looked fine in his first four appearances of the season and he’ll always have elite strikeout numbers. But as I noted two weeks ago, you take the good with the bad. With the strikeouts come the walks and he still pitches in Coors Field. For now, he’s still a free closer to grab and if he loses the job you throw him back.

The Mariners Bullpen; FAAB Bid:  < 3% - I can’t get a read on who is actually the closer here so I’m going to suggest Kenyan Middleton and Kendall Graveman . It looks like Rafael Montero has fallen out of favor (for now) and Middleton and Graveman both notched saves during Thursday’s double-header. For what it’s worth, Anthony Misiewicz pitched the ninth inning on Friday and got the win (but remember Middleton and Graveman pitched the day before). I don’t believe Misiewicz is a real player for saves, but it looks like it’s Middleton and Graveman’s opportunity right now. I might lean to Middleton considering the Bullpen Report suggests he’s next in line, but this is certainly a committee that should be watched because the Mariners are surprisingly off to a 9-6 start and lead the AL West barely 10% of the way into the season. 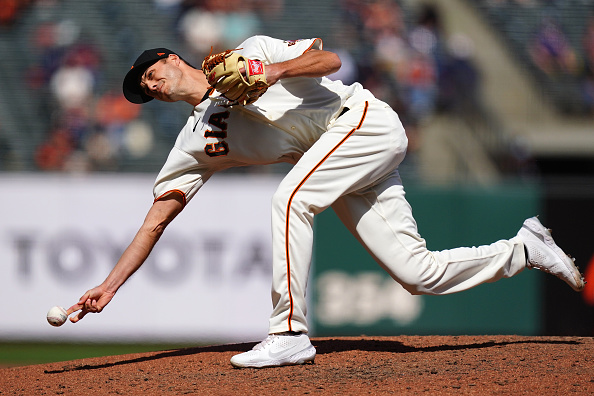 Tyler Rogers (SF) FAAB Bid: 2% - If your league utilizes holds as a category in head-to-head matchups consider Rogers as a solid option. He’s available in plenty of leagues and he’s recorded a hold in five straight appearances, including seven of his last eight. The strikeout numbers aren’t amazing (but his delivery to the plate certainly is), but the other thing worth noting is that he’s in line for saves if Jake McGee ever loses grip on that job (McGee did allow two earned runs on Saturday and took the blown save). This is merely a speculative grab for now if you want to get ahead of your league.

Tejay Antone (CIN) FAAB Bid: 1% - Antone is a tough guy to read because if the Reds use him in long relief you’ll never quite know when to deploy him with complete confidence. There have been questions in the chat about certain long relievers to grab that could eventually crack their team’s rotation. Antone’s always been a candidate for that transition because he appeared as a starter and reliever last season. And this year he’s gotten off to a great start out of the bullpen. He’s a high spin rate guy (as are most Reds pitchers) and he’s recorded 12 strikeouts, two walks, and two hits in just 8.1 innings of work. Just this past week alone he worked 5.1 innings and recorded eight strikeouts. Jeff Hoffman ’s allowed six walks and two home runs in his last 10.1 innings of work. José De León (a guy I admittedly recommended as a streamer) has allowed four home runs in his two starts and made his first appearance from the bullpen on Saturday. So with Sonny Gray back, it looks like Antone needs Hoffman to get bumped to crack the rotation. Fingers crossed because if that happens, Antone’s strikeout numbers could get even better.