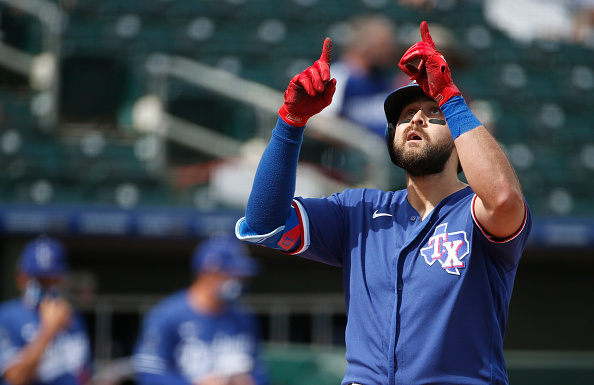 Spring Training games began in earnest on March 1 and we’ve seen some players jump out to hot starts. How has it affected their ADP and is the rise or fall something you should be buying into?  When does an established player’s hot spring warrant a rise in AD or is it a trap and making his cost go up? The spring training hype train has begun. All aboard!

The big bat of Joey Gallo has been launching rockets on a daily basis in Arizona. In six games he is batting .429 with five homers, nine RBI, and five runs scored. His ADP was sitting at 163 on March 1st and it has risen to 152 since then.  That’s almost a full round. In this range most of the players are similar and there’s not a wide differential between them. You know Gallo will not be hitting .429 and will be facing better pitching as the spring moves along. Should you go a round earlier and take him ahead of Franmil Reyes , Rhys Hoskins , Didi Gregorius , and Trey Mancini ? It’s this type of spring, from someone we know what to expect from, that makes the ADP rise of questionable value.

Castro has gotten off to a hot start for the Tigers in Lakeland. The switch-hitting shortstop is hitting .412 with three homers and nine RBI in 17 at-bats. He was projected to be the starter before spring training but this has cast an eye on him in the fantasy world. His ADP was sitting at 247 before games began and has risen to 221. If you wait on shortstop or need a middle infielder late in the draft, he’s a good target.

The value of a rare commodity. Myles Straw saw his stock rise when Jackie Bradley Jr. signed with the Brewers giving Straw the de facto starting job. Straw’s value strictly lies in steals as he is not a power hitter. He’s projected for 4/58/44/27 by Steamer. He has seen his ADP rise from 410 to 307 and will be a late-round stolen base treasure for those who can get him. Of course, he has to hold on to the job and get on base.

Once Wong was signed by the Brewers and once a starting position was secured we saw his ADP rise from 307 to 255. Wong will likely be the leadoff hitter and there is potential for him to steal 20 bases in this spot. He’s projected to steal 15 by most projections but will also be a good addition to the runs category if he stays at the top of the lineup. Since 2016 he hasn’t had an OBP lower than .327 and if that continues, he should hold on to a place high in the order.

So we have examples of two players with a hot start, a player whose ADP rose due to another player signing elsewhere, and a player who signed with a team giving him a good opportunity. Remember to look at recent ADP trends and not the default ones that go back to when drafts first began on that site.

Rodriguez made his spring debut and looked good. His 2020 was nonexistent as he had contracted COVID-19 and developed myocarditis, inflammation of the heart muscle. He is now fully recovered and showed little effect of this allowing two hits over 2 ? innings in his 2021 spring debut. His ADP rose to 213 from 225 but I expect this will go up further with another good outing or two. He is projected to be the opening day starter for the Red Sox.

These Yankees starters both have seen their ADP rise by two rounds or more. Why? Well, their arms didn’t fall off yet. Kluber hasn’t appeared in a game yet but reports out of camp are good. Taillon has pitched well in two outings so far against the Tigers and Pirates, two of the weaker teams in baseball. I guess the hype is there as Kluber’s ADP went from 199 to 167 and Taillon’s from 214 to 193. Are they worth taking a chance that they’ll be ok? Of course, but at the right price and that price is going in the wrong direction.

German is returning after being suspended for 2020 and has looked good. On Wednesday he threw three innings of one-hit baseball with no walks and three strikeouts. With results like this, he has the inside track to the fifth starter job. Garcia has also pitched well having only given up two runs, both on homers, over five innings while striking out eight. If the ADP world is right, Garcia has lost this battle already with an ADP drop to 409 from 350 while German’s has risen to 312 from 324.

With spring training cuts being made, lineups being used that will more closely resemble the real thing, and up and down performances, fantasy baseball drafts will be affected. The ADP is the stock market of draft season. Using it correctly can make or break your draft. Look at the appropriate time intervals or you may miss out on a rising player.