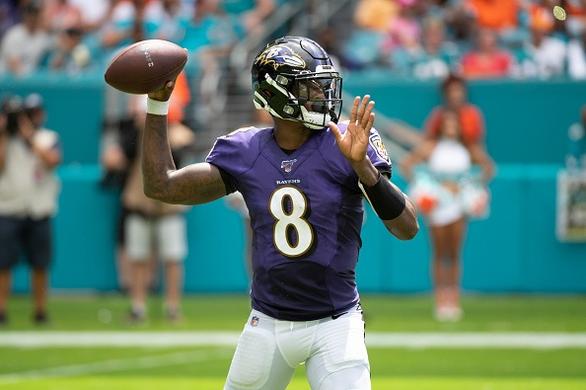 Week 1 was definitely what we thought week 1 would be.  Both the Eagles and the Seahawks caused many a fingernail to be bitten and many curses said as the Redskins took an early 17-0 lead and the Bengals made the Seattle defense look like the legion of gloom.  If you took the Ravens, you were on easy street and could focus your attention on your favorite team’s game.

We saw some great finishes and some things old and new.  The same old Jets blew a 16-0 lead in the second half.  The Browns played like the color of their uniforms and did not live up to the preseason hype.  The Patriots dominated the Steelers in Foxboro as usual and we were reminded to never give up on Drew Brees .

For Survivor pools this week there are two clear cut choices. The Patriots are 19 point favorites on the road in Miami.  They dominated the Steelers at home on Sunday night as the Steelers struggled on both sides of the ball.  An easy pick right? The only thing that holds in our steps to looking for a win is the point spread.  It’s on the road.  It’s a divisional game.  The Dolphins may be on another level of futility this year as we saw last week against the Ravens.  They will probably become the team to pick against each week as we move along.  What am I holding back here with my speculation that this may not be such an easy pick?  Since 2004 the Patriots have gone to Miami as greater than 10 point favorites four times.  In that same time period they have been the road favorite by that margin a total of 14 times.  Here’s the kicker.  The Patriots have LOST three of those 14 games and all of them have been to the Dolphins.  A 1-3 record in Miami as greater than 10 point favorites does not bode confidence.

The other choice, for those who didn’t take them last week, is the Ravens who are 13.5 point favorites against Kyler Murray ’s Cardinals.  Baltimore and Lamar Jackson had a field day against the hapless Dolphins in Miami and now get to play another low level NFL team. This time it’s at home, it’s not a divisional game, and they are greater than ten point favorites giving them that historical 87% winning percentage.  The Ravens defense wasn’t tested last week, and with the loss of several key players to free agency, there still has to be some caution putting them on a level with the top defenses in the league. Lamar Jackson looked great proving he’s not just a “running back”.  Mark Ingram ran the ball well and Brown looked great in his NFL debut.

There are only two other games with spreads greater than 7.  The Texans are 9 point favorites at home vs. Jacksonville.  They gave the Saints all they could handle on the road in a very tough stadium to play in.  Jacksonville lost Nick Foles early in the game and he is now on the IL with a broken collarbone. Gardner Minshew played well after being thrown into the fire during his NFL debut.  He set a record for most consecutive completions to start a career as the Jaguars tried to keep up with Pat Mahomes.  Mahomes, even without Tyreek Hill , shredded the Jaguars secondary and Deshaun Watson is capable of doing the same.  Jacksonville will try to stay in the game with a heavy dose of Leonard Fournette as the Texans gave up 150 yards rushing against the Saints. The Texans are 7-3 lifetime against the Jags at home and should make it 8-3 against the Jags and their rookie QB.

The Chiefs are on the road again and travel to Oakland as the pick by 7.5 points which has dropped from 8 earlier in the week.  Against what’s supposed to be a good Jacksonville defense the Chiefs put up 40 points despite losing Tyreek Hill early in the game.  Oakland put on a good showing on Monday at home against the Broncos, another team with a supposedly good defense.  Oakland looked good on defense, but considering it was against checkdown Joe Flacco , it may not be a good indicator.  The Chiefs are on another level and will test Jon Gruden’s squad.

The rest of the slate is treacherous.  If you want to go off the grid the only two teams I might consider are Dallas @ Washington and the Chargers @ Detroit but I’d save them both considering we have some good options this week.

So what’s the pick?  This is only the 4th time in NFL history that there has been a road favorite of 17 points or more and one was during the strike of 87 when the replacement 49er’s took on the Falcons’ subs. In each of the three games, the favorite failed to cover the spread but still won.  Looking ahead at both the Patriots and Ravens schedules, the Ravens have a much tougher schedule going forward with only one or two opportunities to pick them again. The Pats still have home games against the Giants, Jets, and Bills and road games against the Bengals, Bills and Redskins.  Combining that with the Patriots history of struggling in Miami my pick this week is the RAVENS.  Kyler Murray is still learning, the Cardinals defense is below average and they’re a west coast team playing on the east coast.

If you took the Ravens last week, the other three games are all viable and the order of choice would be Patriots/Texans/Chiefs.  Since we have some good choices in the Ravens and Texans, I’d save the Patriots and Chiefs for later in the season.

Last week’s pick was the Eagles with the Ravens and Seahawks as alternatives. Hopefully you didn’t go off the grid as they all won.  Always available to answer any questions about this or fantasy football on twitter @gasdoc_spit