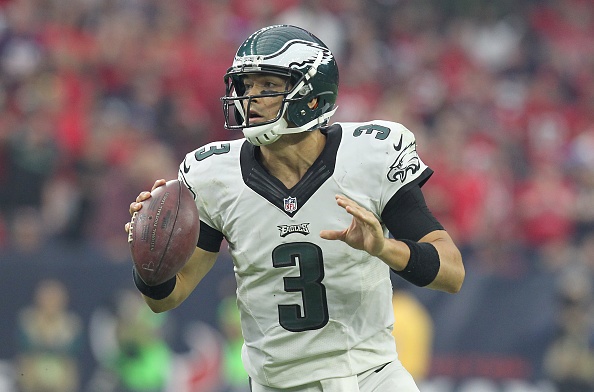 On Wednesday morning I had the pleasure of catching up with Nando DiFino and Tony Cincotta as a guest of the Fantasy Funhouse on SiriusXM Fantasy radio. We chatted a bit about the weather piece I posted earlier in the week then they tossed some names at me. One of them was Mark Sanchez. I told them unless I have one of the top six or seven quarterbacks, I'm rolling with him.

Not only could I hear the collective sigh of the studio over the phone, I could hear radios all over the country switching stations. What the hell is this baseball geek talking about? He really needs to get his head out of his spreadsheets and watch a little football. Doesn't he know Seattle's defense has turned it around and the Seahawks are back to being the dominant force that brought a Super Bowl to the Pacific Northwest?

The evening before getting the invite from Nando I started crunching some numbers for this column. The original theme was going to be about my pet peeve that too much matchup analysis is done on a limited sample. And that will still be a major component but the Sanchez conflict ties it all into an actual on-field scenario.

To briefly review, it bothers me that so many decisions, be it DFS or traditional, are based on results from an unbalanced schedule. In addition, unlike any other sport, there's a week of game-planning between contests allowing teams to address deficiencies. And finally, all it takes is an early special teams or defensive touchdown, or even a turnover giving the offense a short field and the complexion of the game is changed. Sure, there are some conclusions that transcend sample size. but playing a marginal tight end because the opposition allows the most points to tight ends just doesn't make sense to me.

The way I like to partially account for the unbalanced schedule is to basically normalize the data. Today we'll focus on passing; next week I'll break down rushing. We'll use an index. What I did was scale each team's passing yards so the average team yards thrown is 100. A score over 100 means the team gets more than league average through the air while anything under represents throwing for less than league average.

After that, I totaled up the indices each team has faced and determined the average. This represents the strength of opposition. A score over 100 means that defense was taxed with stopping above average passing teams.

Next is converting each team's passing yards allowed to an index. With 100 again as the average, anything below means the team holds the opposition to less than league average passing yards.

The last calculation combines the two into a composite score that averages the team's defensive score with the strength of offenses faced. There's nothing really scientific about this. It's just a way to consider both the team's rank and the quality of opponent in one number.

Here's the data through Week 13:

As an example how the composite works, let's take a look at Cincinnati. In a vacuum, they're the tenth best unit against the pass. Collectively, they've faced the fifth best passing offenses. So their composite rank should be better than tenth since they've played a bunch of throwing teams and they indeed move up to seventh. All this means is the Bengals pass defense could be better than you think based on their rank on paper. I have no idea how accurately the composite represents their true quality. I'm just looking for a quick way to identify defenses that could stealthily hold down the passing yards in what appears to be a good match-up.

Unfortunately, none of this supports my call of using Sanchez this week as Seattle is a top the composite ranks. Though, the extent of how good they appear on paper is softened using index as they shift from being 20 percent better than average to somewhere around ten percent.

To be fair, I'm not the only one to mention this but much of Seattle's recent dominance has come against squads with an index well below average. The average index for their last seven opponents is 92 and that includes Arizona at 101 starting Drew Stanton (with Carson Palmer the Cardinals were above average so they are below average now). So while the Seahawks are definitely playing better, facing St. Louis (89), Carolina (98), Oakland (85), New York Giants (103), Kansas City (77), Arizona (101) and San Francisco (91) certainly helped.

Sanchez has started five games, sandwiching three averaging 328 yards between a pair averaging just 210. The stinkers were on the road with two of the three strong efforts at home. This weekend Seattle travels to Lincoln Financial Field so the

expected baseline is higher plus the Seahawks have to leave the raucous 12th man at home.

The argument for Sanchez in DFS is pretty straightforward; I just need to play the contrarian card. He'll have low ownership in tourneys so that alone makes him a defensible play. While the focus of this space isn't traditional fantasy football, the only four guys I would absolutely use over Sanchez this week are Aaron Rodgers, Andrew Luck, Peyton Manning and Matthew Stafford. I'm on the fence with Tom Brady, Russell Wilson, Matt Ryan and I would have been with Jay Cutler.

Maybe this is an overreaction to my frustration with some of the analysis out there and I'm more justifying than supporting my argument. Only time will tell, And for the record, I only own Sanchez in one league. It's a super-flex league and we're only allowed to carry two quarterbacks so I have no real decision to make.