Steve Pimental breaks down his plays on Monkey Knife Fight for the Conference Championship Round of the NFL Playoffs! 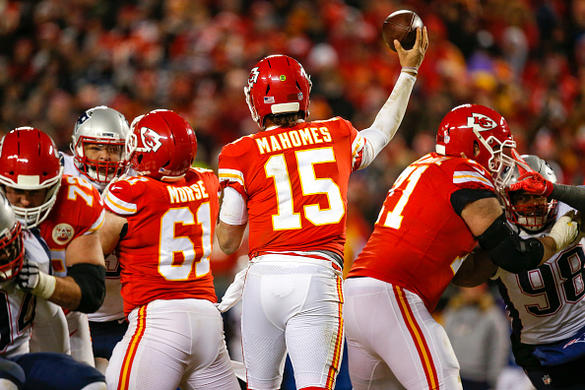 Last week, in writing up my picks for the Touchdown Dance game for GB vs. SEA, I wrote “

I’m really tempted to go for 2.5 or even 3.5 touchdowns in this contest, but I also want to keep my winning streak intact.” Well, I got my wish, but I feel kind of dumb for it. I only went for 1.5 touchdowns with my picks, and Aaron Jones , Davante Adams and Marshawn Lynch each scored two touchdowns. I could have gone for 3.5 or 4.5 touchdowns and still won comfortably and won 5x or 15x my money.

In the end, two of my three cards cashed last week, and I’m not going to complain about continuing to grow my bankroll during the playoffs, but I do wish I had been a bit bolder with my picks. That being said, I’m not sure this is the week to be bold. I don’t expect a lot of points in the NFC Championship, and the AFC Championship features two strong defenses as well. I will (probably) be completely content if I cash in two of the three games again, so here we go.

It’s pretty crazy how much credit Tannehill is getting for this playoff run considering he has completed 15 of 29 passes for 160 yards total over the two games. That would be bad just for one game. Tennessee almost certainly won’t hold its opponent to fewer than 15 points, so Tannehill will probably have to throw more than he has been, but I still don’t expect a ton of yards. Mahomes averaged 234 passing yards over his last six regular-season games, and I kind of think that is his floor for this game. Mahomes had a season-high 446 yards against Tennessee back in November, while Tannehill was held to just 181.

The Texans elected to double-team Tyreek Hill and let Travis Kelce walk all over rookie Lonnie Johnson. Kelce had 10 receptions for 134 yards and three touchdowns, and I’m still not sure anyone would tell you they made the wrong decision. Hill has finished within one reception of Travis Kelce in eight of his 13 games this season, including at Tennessee when he had a season-high 11 receptions. I like those odds.

Williams didn’t do a whole lot last week, but it was nice to see him get all of the running back touches. The Texans seemed content to let Patrick Mahomes carve them up, but I suspect the Titans will try to make Williams beat them, and I think he will be up to the challenge. It would be completely unprecedented for Henry to top 150 rushing yards again, but even if he does, I think Williams can come out on top.

I think I feel best about the Davante Adams call. Adams caught seven of 12 targets for 43 yards and a touchdown in the first game against San Francisco. And I don’t really expect more from him in this game. The 49ers will almost certainly make somebody else beat them in the passing game, which Seattle failed to do.

The problem with taking the under on Aaron Jones is that he is the most likely player to pick up the slack in the passing game if Adams cannot get going. The Packers have appeared reluctant to throw to Jones more than a few times per game, but they may not have a choice in this game. That being said, the 49ers held Jones to 38 rushing yards on 13 carries and zero catches on one target, and I think he’ll have a hard time getting anything going on the ground yet again.

In addition to throwing to Jones, Aaron Rodgers probably needs to make a bunch of plays with his legs to move the ball against San Francisco. We know he is capable of doing so, but we haven’t really seen it this season. Jones has topped 25 rushing yards twice all season, and not since October. If he tries to beat the 49ers from the pocket again, I think he will fail, which is why I’m going under.

By going over for Garoppolo, I’m basically counting on two passing touchdowns. The 49ers would probably prefer Garoppolo hand the ball off 43 times like he did last week, but they have proven they aren’t afraid to let him throw it when the situation or the defense indicates that he should. I don’t expect a huge game, but I could see a couple of big plays and/or a couple of red zone passes to George Kittle . Green Bay will try to make Garoppolo beat them, and I think he will.

The obvious omission here is Travis Kelce , though I would point out he only had six touchdowns during the regular season, and the Titans will almost certainly do a better job defending him than the Texans did.

Like Kelce, Damien Williams had seven regular-season touchdowns and three last week, though Williams missed five games this season. Kansas City has used Williams as a featured back since he returned from his latest injury, and I think Tennessee will invite the Chiefs to run. I also think Tennessee will have less success throwing in the red zone than they have the last two weeks. If they’re going to score touchdowns, Derrick Henry will probably be involved. It would be unprecedented for him to have another huge game in the playoffs, but I wouldn’t want to bet against him.