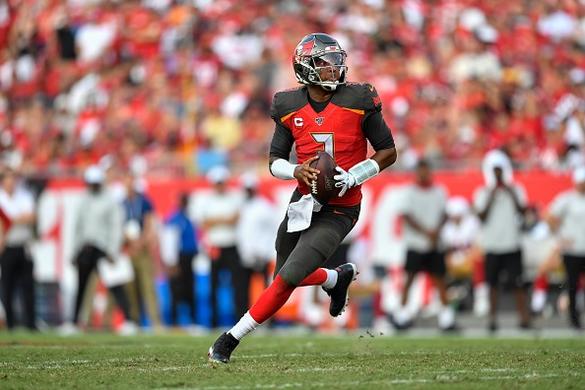 With no games on Thursday night, we turn our attention to the Saturday games. Much like we did for Thanksgiving, we will play one contest from each NFL game. Unlike Thanksgiving, all three of these games look awfully interesting, especially for fantasy.

Only two teams have allowed more fantasy points to opposing quarterbacks than the Texans. Jameis Winston has topped 450 passing yards in each of the last two games even with Mike Evans and then Chris Godwin going down with injuries. It certainly appears that Jameis is going to rack up the passing yards regardless of who he is throwing to, but how much do you really trust Breshad Perriman and Justin Watson ? This would be an easier call if I had any confidence Bruce Arians would actually allow O.J. Howard to run routes.

In a league where everyone checks down even when they are trailing late and should be throwing downfield, this game features the two quarterbacks who are physically unable to check it down. This number seems awfully low considering the Bucs rank 26th in fantasy points allowed to quarterbacks. Watson has topped 286.5 passing yards just twice in his last seven games, but with the exception of the Raiders, those games were all against better pass defense. Tampa Bay just allowed David Blough to throw for 260 yards, and he isn’t half the quarterback Watson is.

It’s hard to believe Brady is giving yards. He has thrown for fewer than 200 yards in three of his last four games, and his worst performance of the season was going 18-for-39 for 150 yards against the Bills in Week 4. Allen only had 153 passing yards in that game, and like Brady, he has been held under 200 passing yards in three of his last four. Neither quarterback has thrown it particularly well, and both defenses are great, so give me the extra 30.5 yards.

Edelman is coming off of his worst game of the season, thanks in part to lingering knee and shoulder injuries. We have no idea how healthy he will be, and we have to note his second-worst game was against Buffalo when he caught four of seven targets for 30 yards. White was only marginally better than Edelman last week, and he only had one catch at Buffalo. That being said, I think Brady will have to throw to White more than he did last week, and Edelman’s injuries are worrisome.

In the middle of the season, it looked like the Patriots might be vulnerable against the run, but they have been awfully stout since. Only the 49ers have allowed fewer fantasy points to opposing running backs. Buffalo is 12th in fantasy points allowed to running backs, but Sony Michel isn’t very good. He has 45 rushing yards or fewer in four of his last six games. Singletary has looked great of late, with at least 60 rushing yards in five straight games. With everything else being close, give me the better running back.

For as many targets as Robert Woods has been getting of late, the touchdowns are still mostly going to Cooper Kupp . Kupp has eight touchdowns on the season including one in each of the last three games, while Woods is stuck on two for the entire season. Mostert has at least one touchdown in four consecutive games, and he certainly looks like the lead back, especially with Matt Breida ’s fumbling issues. Anything can happen, but these three look like the best bets to score from this game by far.

T. Sweeney - TE
BUF
Sweeney, a seventh-round pick out of Boston College, appeared in six games for the Bills and caught eight balls on 13 targets for 114 yards and no scores.
For a full breakdown and detailed player analysis GO PRO and join the Fantasy Alarm Family! CLICK HERE to unlock your PRO package and take advantage of instant savings!
Added Yesterday 5:00 pm (EST)

J. Jones - OT
SEA
Jones (concussion) is recovering from shoulder surgery, which he underwent shortly after the Seahawks were eliminated from the playoffs in January, Bob Condotta of The Seattle Times reports.
For a full breakdown and detailed player analysis GO PRO and join the Fantasy Alarm Family! CLICK HERE to unlock your PRO package and take advantage of instant savings!
Added Yesterday 3:36 pm (EST)