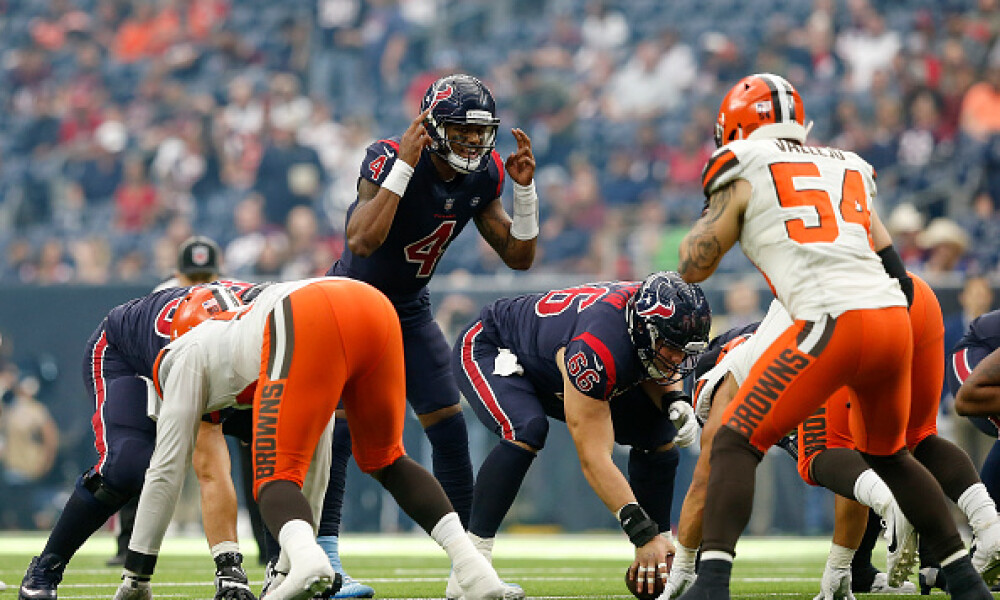 The Houston Texans have traded Deshaun Watson to the Cleveland Browns.  Here are the details of the trade, and then we’ll look at the fantasy football impact.

Will Deshaun Watson Play This Year?

First, we can’t possibly get into a discussion on fantasy football without discussing the possibility of missed games. The best word to describe how the league hands out punishments, in instances like these, would be “arbitrary." They love to say that they will let the court of law handle things – but then they don’t. Charges were dropped against Ezekiel Elliott, yet the league still served a six-game suspension. The same thing with Derrius Guice – not only were the charges dropped and he was officially suspended for six games, but he has yet to be signed by an NFL team. Ray Rice was suspended for two games and never played again. Tom Brady was suspended for four games because of a discrepancy regarding the amount of air in footballs.

On the flip side, there have been guys who were forgiven fairly easily. Ben Roethlisberger served his four games and was right back out there and he’ll likely get inducted into the Hall of Fame. Michael Vick went to jail for animal abuse and he came back to play. Joe Mixon and Kareem Hunt are seemingly beyond their issues. So the reality is whatever punishment Watson gets (if any), it’s now clear he will play football again. Whether or not the fans accept it or not is up to them.

It’s a difficult topic, but it’s also our responsibility here to give you advice from a fantasy football standpoint. Watson got hurt his rookie year, but not before lighting the league on fire with 21 total touchdowns in only seven games. Leading up to the injury, he scored five, five, three, and four touchdowns. Since then, he’s finished as QB4, QB4, and QB5. There is no question that this guy can play and, if he were to play a full season, he would immediately be in the discussion as a top-five fantasy quarterback in the league because that’s essentially what he’s always been.

Who Wins? Who Loses?

Hard to describe anyone in his situation as a “winner," but Deshaun Watson gets to leave the Texans (which he wanted) and he gets a massive new contract. Most importantly, it's a fresh start for him too.

Not often are both QBs winners. But the reality is Kevin Stefanski’s offense with Baker Mayfield was one of the most run-heavy in the league. He’ll get traded somewhere where he will presumably be the starting quarterback. Even if it’s to the Indianapolis Colts, he also gets a fresh start and a change of scenery.

Yes, the trifecta of QB winners. The odds of Watson ever playing again for the Texans was pretty slim, but now it’s at zero percent. The QB12 last season averaged around 18 points and Davis Mills quietly had the most 18-plus point fantasy games last year of any rookie (with six). He had multiple 300-plus yard passing games and multiple three-plus TD games. Could be a sneaky best-ball pick.

This one is pretty obvious. Deshaun Watson is a better quarterback than Baker Mayfield. Everyone knows that. Amari Cooper and David Njoku are presumed to be the top two targets on the Browns this season.

This goes for all free-agent or trade-candidate quarterbacks because this move is going to have a “trickle-down effect” on available jobs. Davis Mills was already locked in for the Texans, realistically. Deshaun Watson enters the player pool and takes the Browns job. Baker Mayfield then goes to a team like the Colts or Saints and takes that job. There are fewer starting quarterback jobs now than there were yesterday. It's unfortunate for Jameis Winston, Marcus Mariota and Jimmy Garoppolo.

It was a long shot and some claim that he’s “QB proof," but even QB-proof players play better with better quarterbacks – and Deshaun Watson is a great one. Brandin Cooks is a loser with Watson leaving town.

This might surprise some people because usually with a better quarterback, a rising tide lifts all boats. But there is an interesting phenomenon when it comes to mobile quarterbacks and quarterbacks that stretch the pocket. Andrew Erickson from Pro Football Focus has done some interesting work on the topic and he’s essentially confirmed a suspicion we’ve had within the community – mobile quarterbacks dump the ball down to the running back less often than their peers. Nick Chubb should be fine, but there is a potential for Kareem Hunt to actually get fewer targets than he would with a pocket-passer like Baker Mayfield.

Jarvis Landry and Austin Hooper spent all this time playing with Baker Mayfield only to be released right before Deshaun Watson comes to town. Painful.