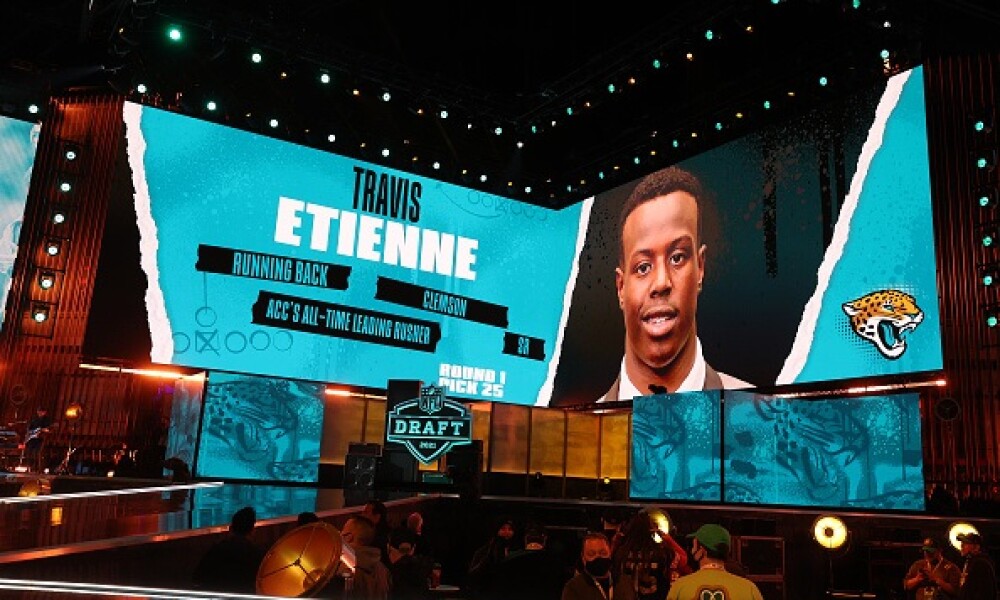 We just told you last week why your rookie tight end might not break out right away.  And in that article we briefly introduced the idea of the running back “room” as opposed to linear depth charts.  But we didn’t really get into WHY the modern NFL features a lot of backfields that split up the work rather than straight line depth charts with a starter and backup.  So guess what sports fans?  Let’s do that right meow.

Will you make a goddamn play, Mittens?

The very first thing we are going to do is tackle one of the biggest misconceptions.  And that’s the idea that, for all organizations, the personnel determines the depth chart.  Now for some teams, that actually is the case.  Matt Nagy inherited a roster with one guy who is good at running but has stone hands (Jordan Howard ) and one guy who is too small to run up the gut but has great hands (Tarik Cohen ).  So, for that first season, you set the offense up based on what you have.  However, his system that he brought over from KC is one of the rare ones that uses a singular back so he quickly traded Jordan Howard the following season then traded up to get David Montgomery .  But, for that first year, the personnel did dictate the depth chart.  HOWEVER, there are some teams that stick to their own philosophy rather than molding the offense around the players.  For instance...

How many times do you think this conversation has been had?

Person A From Boston: The new Pats runnin’back is gunna be a stud, dude

Person B From Boston: Bro, the Pats have nevah used one runnin’back, my guy - they always use two.  Remembah Kevin Fawwwk bro?

Person A From Boston: Yeah but they nevah had a back like this new guy, kid.  He’s THE guy bro. Guy. Dude.

And that’s exactly what that sounds like, whether it’s Dion Lewis or Sony Michel or Damien Harris or whoever.  And guess what? It’s always a split backfield.  And that’s by design.  As opposed to some offenses that want one RB and a balanced attack, the modified Erhardt Perkins system that the Patriots have used since the days of Charlie Weis thrives on misconception.  They WANT you to think it’s a run play when Sony Michel is in the game so they can pull your pants down with play action.  And they WANT you to think that it’s a pass when James White is in the game so they can hit you with a draw or a screen.  They want the defense to skew one way so they can go the other way.  If they had one balanced RB out there and the defense plays it straight, it makes them far less susceptible to deception.

It’s been like that for 20 years now in New England - no Patriots running back has had 200+ carries and 35+ receptions since Robert Edwards and Curtis Martin.  And that was in the 90s under Pete Carrol.  It’s a distinct two back system with a rushing down back and a passing down back.  The greatest example of this of course is Dion Lewis . In 2015 Dion Lewis was in the passing down role.  He only played 7 games and he only had 49 rushes but he had 50 targets and 36 catches.  That’s a 114 target and 82 catch pace.  Then he got hurt, they brought in James White , and, two years later, Lewis found himself as the third RB (Rex Burkhead in 2020) as the backup to both Mike Gillislee in the running down role and James White in the passing down role.  Gillislee got hurt almost immediately in 2017 so Dion Lewis moved into the running down role.  He played all 16 games but the strangest thing happened - he got a whopping 180 carries but he only got 35 targets and 32 catches.  Yes, in 7 games in the passing down role he got 50 targets and 36 catches in 7 games but, in this role, in 16 games, he actually had FEWER targets and catches.  Fewer catches in double the games.  It’s not because he was no longer good at catching - it’s because he was literally playing a different position/role within the playbook.

So, when the Pats draft a big plodder in Rhamondre Stevenson, you already know that he’s going to be in line for that Sony/Harris role.  But what’s even more scary for fantasy gamers is that one of Bill Belichick’s best friends is now coaching the Jaguars.  He just drafted Travis Etienne and immediately said that Etienne would be the third down back while James Robinson and Carlos Hyde handle the running down duties.  Then, he announced that Etienne would be working out with the WRs exclusively during rookie minicamp.

Having a passing down running back who can run routes like a wide receiver while also having guys like James Robinson and Carlos Hyde for the early downs?  That sounds like a pretty familiar set up.  And that’s coming from the mouth of Urban Meyer, a coach who straight-up said “I actually modeled my recruiting after Coach Belichick”.  James Robinson is under contract for at least two more seasons. Scary indeed.

Split Backfields Based on Personnel

As we mentioned above, this is the one we are all way more familiar with.  It often applies mostly to regime changes since eventually you will mold the roster to your offense, not vice versa.  The notion is still the same except the decision is being made because you have one back who’s good at running downs and one back who’s good at passing downs already on the roster - not necessarily because you designed it that way.  But again, there is an underlying misconception with this that fantasy gamers aren’t quite grasping.  Because your mind immediately wants to tell you that catching the ball and running with it is going to be the most important thing in determining who plays on passing downs.  And that’s actually not always the case.

The easiest and greatest example of this is the Denver Broncos prior to 2020.  Phillip Lindsay was far and away the best back on the field both running and catching the football.  Yet he couldn’t capture the full snap share.  Specifically, he was splitting the passing down snaps with Royce Freeman , of all people.  Why exactly was that?  Well, once you pull back the curtains a bit, it becomes fairly obvious.  Here is how Lindsay graded out in pass blocking in his years on the Broncos, per Pro Football Focus.

I don’t think I need to explain why being ranked 141st in anything in this league is not good.  That’s what kept Royce Freeman (yuck) on the field and it’s what brought Melvin Gordon to the team.  Some people might say “well I don’t want my runningback playing those blocking snaps anyway - I just want him catching”.  But modern pass pro is a little more complex than that.  Here is an excerpt from an article I wrote earlier this year on D’Andre Swift.

There is a reason some rookies struggle in pass blocking (not J.K. Dobbins or Zack Moss of course because they were great at it).  And that’s because pass protection is not as simple as you may think it is.  The far more simple play is when they just stick the ball in your gut and say “run left”.  Modern pass protection schemes are complex.  So the play isn’t usually “okay Giovanni Bernard, you are blocking on this play!”  It’s more like “Gio you are going to line up in the slot and on the second ‘hut’ you are going to motion into the backfield to the right of the QB then when the ball is snapped you check to see if any of the five linebackers or cornerbacks are blitzing.  If they blitz, you need to identify that and stop them and, if not, you run a Texas route over the middle and settle in about a yard past the line of scrimmage but not too deep as to disrupt Tyler Boyd ’s drag route you got that?”

You see, the nature of the “pass protection” game generates more potential targets for the person on the field in that role.  Because you not only get to sneak out on designed passes and screens  but sometimes there simply is no one to block and you are better off as an option in the passing game.  The trust that you won’t let the QB get killed is what gets you onto the field and the reward is that you get those safety valve targets.  So you want your guy to be on the field for those snaps even if he has to block sometimes.  As we mentioned in our recent article debunking Zeke myths, Zeke Elliott blocked more than any other RB in the league last year but he also played more pass snaps than any RB - over 100 more than Alvin Kamara .  And as the excerpt suggests, rookies can struggle with the intricate concepts and quick decision making of pass pro which leads to a veteran like Kerryon Johnson last year taking a lot of those snaps.  For anyone interested, here are some surprising backs who struggled with it last year.  Kind of makes sense why guys like Nyheim Hines still played so much and why the Lions went out of their way to get Jamaal Williams .

Notable RBs who did surprisingly poorly in pass blocking last season based on PFF grades:

Talent and The Modern Workhorse

The end goal for fantasy is to have your guy become the workhorse.  Some teams like the Patriots under Belichick or possible the 49ers under Shanahan might not even want to use just one guy which presents a challenge.  But, in the end, most times talent wins out and the players who have the right skill sets can capture a huge snap share.  Just remember that not every single back is custom-fit for the exact offense he’s going to like Najee Harris.  Some backs like Travis Etienne may need to start in a pass catching role (which isn’t the end of the world as Alvin Kamara has never had 200+ carries but that didn’t stop him from scoring 6 touchdowns in championship week last year).  And some backs may be in a position like Javonte Williams where he starts out as second fiddle and has to wait out a 28 year old Melvin Gordon .

In the end though, it ends up being a lot more simple than all this needs to be.  In redraft leagues, you want to target the guys who have the opportunity you like, which could be Najee Harris or Travis Etienne in PPR or even Michael Carter in a wide open Jets backfield.  In dynasty, you always want to target the guys with talent however.  You might need to wait but we already explained in this series why you might need to wait on rookie wide receivers or rookie tight ends as well.  So be patient and trust your process.