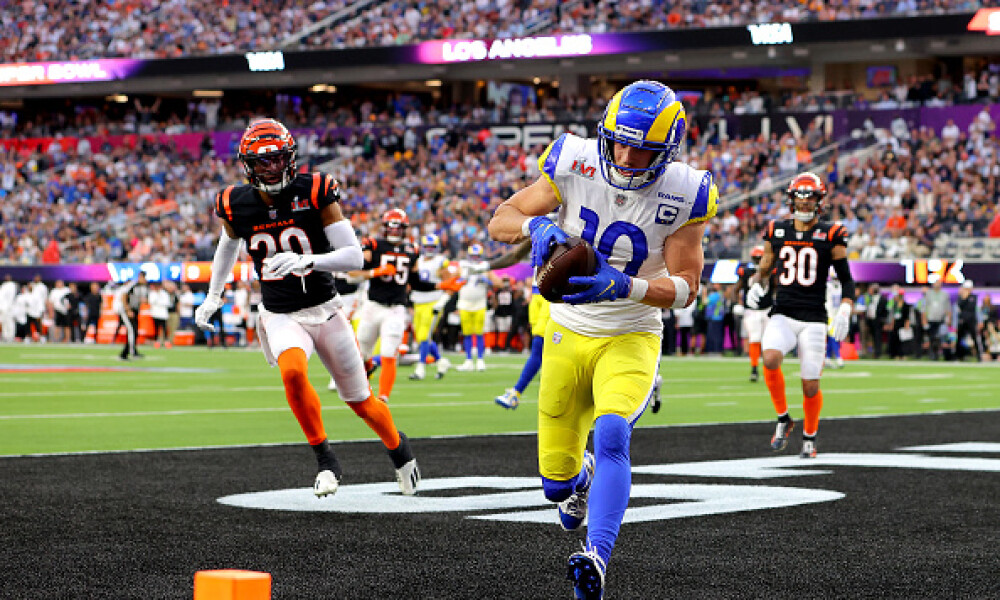 Going into the fantasy football draft room is always the most exciting time of the year for me. There are so many players in new situations, we’ve listened to all the NFL news, and we all have our favorite fantasy football sleepers who we think are going to bring us home a championship. While some of our luck comes down to our draft position and other members of our league, there are certain draft strategies that we can utilize to edge out our opponents, especially in your wide receiver rankings.

It’s easy to simplify a draft strategy for wide receivers; take “good” players on “good” teams, right? In reality, so much more goes into it. You need to parse out target share, passing volume, snap counts, red zone efficiency, quarterback play, and more to find the most efficient players at the position. It can be very easy to get bogged down in the numbers, so where do you start? As we know, fantasy football involves a bit of luck, but knowing how much weight to give to which stats can help you take some of the luck out of the equation. For purposes of this article, we’re talking about PPR leagues, so some of these factors will hold more or less weight than they do in various other fantasy football formats. These lessons can still be applied to all wide receivers so, if you play in half PPR or standard, just know that you are leaning a little more into yards and touchdowns in those formats.

So how do you decide whether to take one WR1 over another or even a team’s WR2 over another team’s WR1? Two of the most important factors in determining how successful a wide receiver will be in fantasy are team passing volume and a high target share. This should be a no-brainer, but they need to be looked at together. For example, it’s very easy to look at Tennessee’s WR1, A.J. Brown's 27% target share and think he should outperform Mike Evans and his 16.7% target share. Brown was drafted at a higher ADP than Evans due to the perceived target share advantage; however, despite earning a lesser percentage of targets, Evans earned eight more actual targets over the course of the season than Brown did and put up 81.6 more fantasy points.

Target share can be misleading if it’s viewed in a vacuum; to accurately predict how successful a wide receiver will be in fantasy, you need to pair that target share with a team’s passing volume. Tampa Bay led the league in passing volume last season, averaging 43.3 attempts per game, while Tennessee was near the bottom of the league in attempts at just 31.1. Of the seven teams that supported two wide receivers in the WR1-WR3 tier, five of them were in the top 12 in pass attempts per game. This doesn’t always mean a team with a lower pass percentage can’t have two or more fantasy-relevant receivers (hello, Bengals), but it’s a good place to start when splitting hairs between a WR1 on a lower volume team and a WR2 on a higher volume team.

The second factor to look at when deciding who to draft is a wide receiver’s snap share, routes, and blocking usage. Obviously, we want our players to be on the field as much as possible: they can’t score points if they’re not on the field, right? In addition, though, we also need to consider how many times they are running routes versus being placed in a blocking role when they take those snaps. We’ll stick with Mike Evans and A.J. Brown for this example. In 2021, Evans’s snap share was 83.1%, and of those snaps, he only blocked on 27.9% of them, freeing him up to run routes on the rest. Contrast that with A.J. Brown, who had a 70% snap share and blocked on a whopping 39.2% of them. A more extreme example would be comparing Evans’s teammate, Antonio Brown, to someone like N’Keal Harry. Harry actually played a lot more snaps than Brown on the season (328 to 268) yet Harry blocked on a whopping 53% of his snaps while Brown blocked on a mere 24%. It’s not the only reason Brown was relevant and Harry was not but it’s clear who was out there to catch passes and who wasn’t. Like target share and passing volume, snap share and blocking usage isn’t a be-all-end-all indicator on its own, but it does help you potentially break a tie when combined with other factors.

While red zone efficiency can vary from year to year, it can be a helpful indicator if the analysis from the factors mentioned above are too close to call. Red zone efficiency is a metric used to calculate how many times a team scores for each time they are in the red zone. For wide receivers, it is much the same, using how many targets, receptions, and touchdowns they get while inside the red zone. This metric should be used when factoring the “upside” a player has. It is part of the reason Mike Evans, despite only having a 16% target share, was able to leap ahead of so many other receivers ahead of his ADP tier, including teammate Chris Godwin. Evans ranked fourth overall in red zone efficiency from the 20-yard line, behind only Cooper Kupp, Stefon Diggs, and Davante Adams, with 19 targets, 14 receptions, and 10 touchdowns. Godwin, while having 26 targets and 20 receptions in the red zone, only scored five times, diminishing his efficiency.

Again, this is not something you want to pin your fantasy hopes and dreams on, as touchdown regression is very real in some cases, but it can help give you an idea of who the quarterback trusts when it matters most. Allen Lazard is a great example of this trust. Despite finishing as WR31, Lazard came in tied for 12th in red zone efficiency from the 20-yard line in 2021. He only had 60 targets through 15 games last year, but 16 of those targets came from within the red zone, and they led to seven touchdowns. When assessing a late-round draft pick and trying to determine who has the most chance of scoring your fantasy points, red zone efficiency is an extremely important metric.

The three categories mentioned above are all crucial, but in order for a receiver to gain receptions, yardage, and touchdowns, they need to have an efficient quarterback. We all want to pair a wide receiver with a quarterback who puts up fantasy points. However, sometimes those points mislead us into thinking that some of them will correlate with higher points for the wide receiver, which is often not the case. For example, Jalen Hurts, despite finishing in the top ten in fantasy points, only managed to support one mid-tier WR3 in DeVonta Smith. Kyler Murray finished as QB10 but only supported a fringe WR2/WR3 in Christian Kirk. It can be deceiving at times, as my colleague Andrew Cooper points out by comparing the surprisingly similar passing production provided by two quarterbacks last season here.

At times, quarterbacks who rush more do not provide their wide receivers with upside or consistent targets because the volume is just not there. Along the same lines, do they tend to target their tight ends more than wide receivers, like Patrick Mahomes and Lamar Jackson? Do they tend to make inaccurate throws and commit more turnovers, thereby robbing you of important time of possession? Or does your team play from behind often, forcing your quarterback to throw more, as in the case of Amon-Ra St. Brown or Elijah Moore last season? Just because your wide receiver’s quarterback is “good” or “bad” does not mean it will translate to fantasy success for your player.

Putting These Factors Together

Now that I’ve inundated you with numerous ways to rank your wide receivers, what do you do with all of it? I would recommend this. Weigh each factor in an inverse pyramid and see which player comes out on top on the most important factors. Also, feel free to weigh these factors in accordance to how risky you want to be. Do you want to take a “safe” play in a slot receiver who runs a high percentage of routes and earns lots of targets, or would you rather go with an “upside” play in a receiver who has a high red zone efficiency but doesn’t earn a ton of targets? All of this depends on who you are as a fantasy player, how your league settings work, and who is available for you to take, but I hope they are all helpful to you in dominating your league and taking home a fantasy football championship. Good luck!