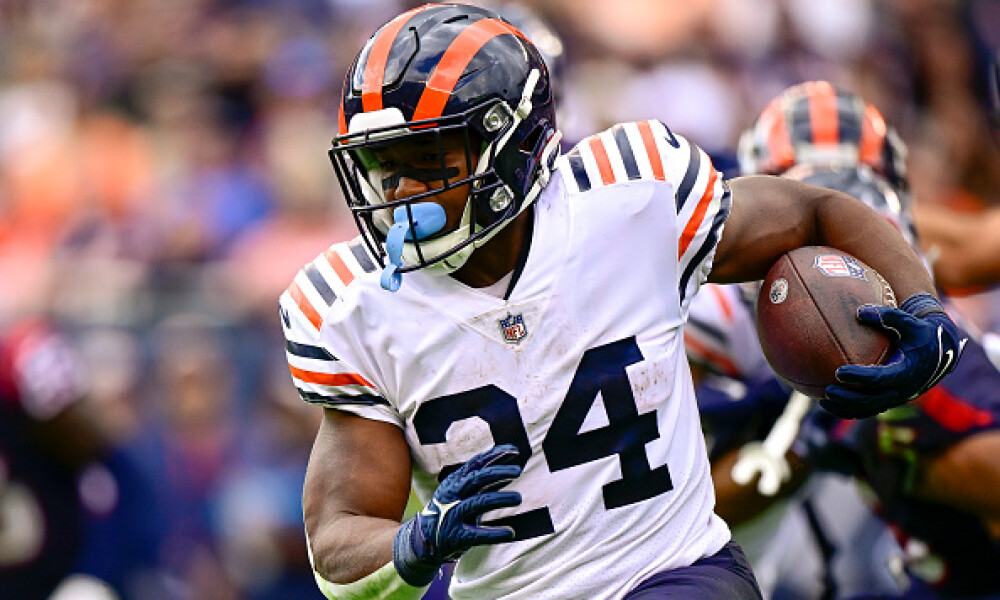 Good morning, my fellow fantasy football lovers! With Week 3 of the NFL season (almost) in the books, we have more questions than ever about our favorite teams and players. How is it that Kevin O’Connell is tanking Justin Jefferson’s fantasy value in favor of K.J. Osborn? How did the Jaguars beat the Chargers by 28 points? Did Davante Adams go to the Raiders to be a decoy for…Mack Hollins? Sometimes, fantasy football makes me feel like I’m trying to forecast a hurricane with a spaghetti model using actual spaghetti…just throwing it at the wall and seeing where it sticks.

Much like a hurricane’s rain, this week dropped tons of juicy takes for us to sink our chompers into. We could take the easy way out and talk about how the Cardinals should have left Kyler Murray’s study clause in his contract or how Russell Wilson is unstartable and may even be waiver wire fodder, but, in case you’re new here, that’s not how we roll. We like it as spicy as the “One Chip Challenge,” and that’s what I’m going to give you. Let’s dive in!

Patrick Mahomes is a Liability in Week 4 Against Tampa Bay

Everyone was ready to victory lap the Mahomes doubters after his Week 1 performance, but oh, how the tables have turned!  Maybe, just maybe, Mahomes doesn’t have the magic that made him a weekly fantasy football cheat code in past years. Against the winless Colts, Mahomes only managed to put up 262 yards and one touchdown, and he even ruined his team’s chances of a comeback by throwing a costly interception during the last drive of the game. There was also a tense moment between Mahomes and offensive coordinator Eric Bienemy at the end of the first half, and you know the loss didn’t help that.

It looks like not having a true number one receiver is hampering his fantasy output, and the Chiefs will be heavily tested next week at Tampa Bay. The Buccaneers’ defense currently ranks sixth in points allowed to the quarterback, and Mahomes does not play his best football on the road. If you drafted him at his ADP, you’re starting him, but don’t be surprised if he underwhelms.

I could say that the Bears offense has been a dumpster fire this season, but that would be offensive to dumpster fires. Today, that changed with the emergence of Khalil Herbert after David Montgomery left the game due to injury. Herbert looked like a bonafide workhorse back with an astounding 7.85 yards per carry average, and he did it behind one of, if not the, worst offensive lines in football. Justin Fields sure isn’t doing the Bears any favors, and if they want to have any hope of winning games, they need to roll with the hot hand.

After today’s performance, it is going to be hard to argue against starting Herbert. Montgomery’s yards per carry average is, well, average at best at just 4.63, and although head coach Matt Eberflus is new to the game, he’s no dummy. Herbert has the makings of a star, and there’s no way he lets go of the starting job.

DeVonta Smith is the Alpha Wide Receiver in Philadelphia

Did anyone see this coming? After Week 1’s dismal performance, the masses were ready to write off DeVonta Smith as a casualty of the AJ Brown trade. Despite playing 96% of the snaps, Smith finished the first tilt with only four targets and no catches, but the past two weeks couldn’t have been more different. This week, Smith saw 12 targets with eight catches and 169 yards compared to just five catches for 85 yards for Brown. Smith is also outpacing Brown in snap percentage, and with some juicy matchups coming up against the Jaguars, Cardinals, and Cowboys, count on him to continue piling up the fantasy points.

“But they got AJ Brown for a reason.” True, but the reason may have been to open up Smith for the wide receiver one role they drafted him to be in. Now before you get on my case, yes, AJ Brown is still a great fantasy option, but snap counts and targets don’t lie and Smith has the advantage in both. Don’t be mad at me for stating the facts. Like Ice-T said, “Don’t hate the player. Hate the game.”

Gabe Davis is Shaping Up to be a Bust

Much like the Mahomes truthers, Gabe Davis truthers were victory-lapping his Week 1 performance, but this week’s numbers were less than stellar to say the least. He only had three receptions on six targets for 37 yards and dropped a touchdown in the third quarter that would have given Buffalo the lead. Despite playing 96% of the snaps, Davis only commanded 11% of the targets in this game, and he was outscored by Isaiah McKenzie who is still in a timeshare with Jamison Crowder.

The Davis truthers will be quick to say he was out there as a decoy today as he was still recovering from an ankle injury suffered last week, but they’re only fooling themselves. He only had a 16% target share in Week 1, and most of his production that week was a result of blown coverage. This isn’t to say he won’t have spike weeks here and there, but you need him to perform at a high level every week with where you drafted him and with this kind of target share, he’s a textbook bust.

I know what y’all are saying. Mack who? After today, I bet you don’t sleep on him again. Mack Hollins delivered in a BIG way today, leading the Raiders in targets, receptions, and yardage, but it wasn’t just because Hunter Renfrow was ruled out with a concussion. Last week, he played 87% of the snaps and saw eight targets, finishing with five receptions and 66 yards. After Renfrow’s fumbles last week, don’t be surprised if Hollins retains his role in this offense as a deep threat. I mean, look at this touchdown catch!

The Raiders face the Broncos next week, and with star cornerback Patrick Surtain likely on Davante Adams, Hollins could be the guy again. It feels like we’re living in the Upside Down for this to be happening, but the trends don’t lie. Keep your eye on Hollins over the next few weeks.