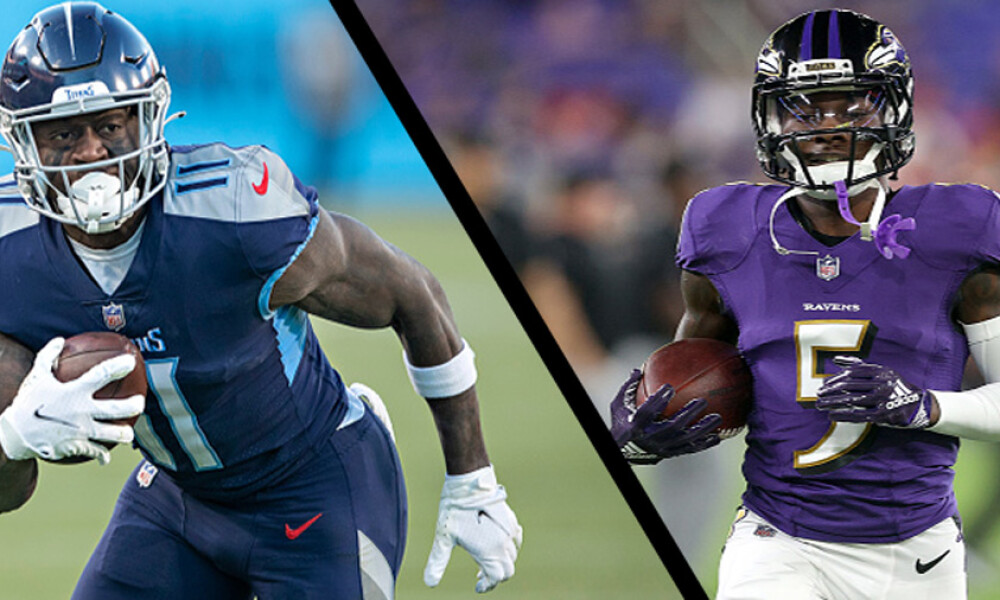 Wow! After a wild NFL offseason that saw guys like Russell Wilson, Deshaun Watson, Matt Ryan, Davante Adams, and Khalil Mack all traded, the 2022 NFL Draft followed suit with a couple of huge trades for draft picks. Specifically, the Tennessee Titans traded A.J. Brown to the Philadelphia Eagles while the Baltimore Ravens traded Marquise Brown to the Arizona Cardinals. So, let’s take a second here to digest just what these trades mean for fantasy football.

The Ravens use more personnel groups than any other team in the league. Ask yourself which player played the most backfield snaps last year besides Lamar Jackson. You probably wouldn’t guess fullback Patrick Ricard, but that’s actually the answer, as he logged 43% of the snaps. That’s a big part of why wide receivers in that Baltimore offense might not be as valuable as they are in others.

Let’s say you have a base offensive set of five linemen, a quarterback, a running back, a tight end, and three wide receivers. When the Ravens bring in a second tight end, a wide receiver comes out. When they bring in a fullback, another wide receiver comes out. And that’s how it goes down in Baltimore. The leading wide receiver in terms of snap percentage last year was Marquise Brown, with 74.4% of the snaps. The next closest was Rashod Bateman at 48.6% – not even half of the snaps. If they believe in Bateman, he can be the full-time guy and the rest of the Ravens' receivers will continue to be ancillary pieces.

The Cardinals are on the far end of the spectrum from the Ravens. Kliff Kingsbury’s Air Raid offense ideally uses four-wide receiver sets (though running Zach Ertz out wide for 63% of his snaps gets the job done too). They have DeAndre Hopkins, who will be on the field at all times, at split end or flanker. AJ Green will play as a flanker. Marquise Brown is now the field-stretcher. Rondale Moore is a slot gadget guy. Zach Ertz plays both TE and slot. That’s more than enough weapons to run the offense but, even if Marquise Brown is the inevitable replacement for AJ Green, it’s a crowded offense.

Let’s even say, hypothetically, AJ Green is done and Marquise Brown takes the role opposite of DeAndre Hopkins. Even just that type of setup can really thin out the targets. Brown goes from being the focal point of the Ravens' pass attack to one of four in this one (and certainly behind Hopkins at least). Rondale Moore and Zach Ertz are both low aDot, volume-dependent players so it makes their upside quite a bit murkier as well. Ertz, who ran a 4.76 forty-yard dash even in his prime, isn’t one to generate much YAC – so he needs volume. Plus, Moore had an average depth of target (aDot) of 1.3 on the SEASON. He had eight games with a negative aDot, meaning his passes were exclusively caught behind the line of scrimmage. Those guys both need volume to succeed and it will be hard to find that with Hopkins, Brown, and Green in the mix.

The Titans apparently made it clear that they weren’t going to pay A.J. Brown the money he wanted, so they decide to cash out now and get something back before the bill came due. Had they simply held onto him until free agency, the Titans would have simply collected a third-round comp pick. Instead, they got the 18th overall pick and pick No. 104 (4th round) in this draft from the Eagles. Tennessee then promptly used No. 18 on Arkansas wide receiver Treylon Burks. The hope here is that the Titans can pull their own version of what the Minnesota Vikings did in trading Stefon Diggs then immediately drafting Justin Jefferson. It’s not always a fairy book ending like that, however.

The seat that Jalen Hurts sits on just became the hottest one in the league. With DeVonta Smith, A.J. Brown, and Dallas Goedert in Philadelphia, there are no excuses left to be made. Jason Kelce is back, Lane Johnson is back, and backup quarterback Gardner Minshew is still there breathing down his neck.

The two guys that take the biggest hits here in fantasy are Jalen Reagor and Dallas Goedert. At the end of the day, the vast majority of NFL offenses can only support two fantasy-relevant pass catchers at most. In fact, we’ve done some research on this and there are far more instances of teams having either one or zero relevant pass-catchers than there are three. So, in order to prop up one of Goedert or Reagor for fantasy, you need to bet against one of A.J. Brown or DeVonta Smith. We typically bet on what’s most likely to occur.