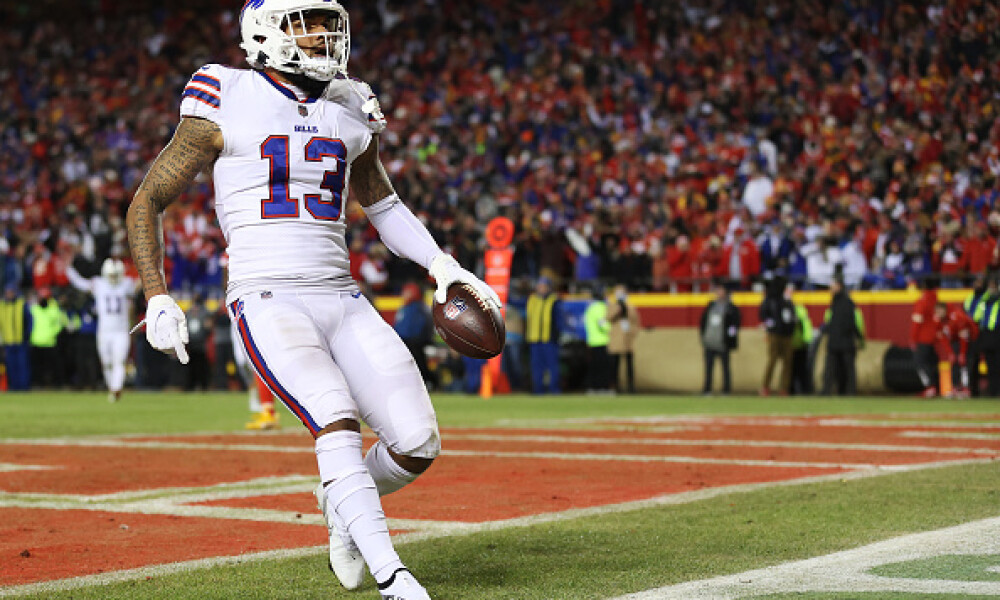 Cracking the code on wide receiver rankings in recent years has been the key to dominating in fantasy football best ball tournaments. Last year, guys like Cooper Kupp, Deebo Samuel, and Jaylen Waddle came from their super low ADP in early best ball and fantasy football mock drafts to win folks a boatload of money come December. In an 18-round draft on Underdog Fantasy, you are almost certainly drafting more wide receivers than any other position. As we discussed in our own article on Best Ball Roster Composition, you’re going to want to draft between six and nine wide receivers to give yourself the best odds. That’s quite few players to carry on a roster.

And one of the keys to not falling on your face like poor Kramer there is to take the landmines and clear them out of your fantasy rankings before you even draft. So, just like we did with running backs already, the first thing we are going to do is identify some guys that you should just avoid completely at ADP. Then, once you are armed with that knowledge, you can head on over to Underdog Fantasy, use promo code “ALARM” (where they will match up to $100 for first-time subscribers), and draft a winning squad. Right now they have the famous Best Ball Mania III contest open with a prize pool of $10 million on a $25 entry as well as The Puppy which has a half a million-dollar price pool on only $5!

But first, let’s get to the wide receivers we are fading.

I understand the logic here. John Brown beat out Gabriel Davis for the flanker spot in 2020 but Davis flashed when Brown was hurt. Then Emmanuel Sanders beat out Davis for the flanker spot in 2021 and Davis flashed when he was hurt. And the big flash, 200 yards, and four TDs in their last playoff game is fresh in everyone’s mind. This year he has a clear path to that flanker role and that’s what people are leaning into.

But I think in this year’s ADP we might be putting a little too much emphasis on that one big game. I’ve had folks mention that he was graded as WR17 on ProFootballFocus last season without realizing that, when you remove that one game, he was WR44. I mean, in his last regular-season game vs. the Jets he got 14 targets and only caught three of them for 39 yards. And that’s kind of been the issue for Gabriel Davis - in both years his catch rate has been around 55%. You take every WR that got at least 30 targets and 55% is outside of the top 100. With a catch rate like that you need volume and he’s set to compete with Stefon Diggs, Jamison Crowder, and Dawson Knox. Cole Beasley got 100+ targets in this offense in back to back to back years and Jamison Crowder is basically a younger Cole Beasley. Cole Beasley is now 33 and Jamison Crowder is 28 (turns 29 next month). Why are we just assuming that Jamison Crowder plays a minor role and, Gabe Davis, who couldn’t beat out Brown, Sanders, or Beasley for playing time, is now a WR2?

In terms of athleticism, the best comparable player for Gabriel Davis on Player Profiler is Zach Pascal. And, coincidentally, they scored the same exact number of PPR points in 2020 (136.9, good for WR56). That’s really the main concern for me here - he’s yet to even finish as a top 50 WR so we are chasing hypothetical production based on what we perceive his new role to be. We’re well aware of the ceiling but the floor is what is truly scary.

Not to mention, there are still free agents like Will Fuller and Odell Beckham Jr floating around out there and we know that the Bills don’t exactly have a top receiving group. A win-now team like Buffalo might not want to take any chances here when they see what kind of firepower teams like the Bengals are rolling out. We’ve already seen the Bills take the fourth round Davis and move him to the “next man up role” two years in a row now.  So just be careful with this ADP in June. Even without adding anyone, the whole bet is that Gabriel Davis might now be the second fiddle in his offense but we don’t know that for sure. So why not just take a guy that is guaranteed that with Adam Thielen two rounds later? Before he got hurt last year, Thielen was WR7 in this format. The year before that he missed a game with COVID and still finished as WR8. And, in terms of just passing, there really wasn’t a huge difference from Josh Allen to Kirk Cousins last year. Look at their per game numbers here.

Everyone by now knows the number one argument against Amon-Ra St. Brown - he didn’t really do anything until guys like Quintez Cephus, TJ Hockenson, and D’Andre Swift were hurt. In fact, the complete failure of Breshad Perriman and Tyrell Williams went a long way in helping ARSB right from the jump. Day three wide receivers usually don’t have that kind of path to the field. Now, not only are Cephus, Hock, and Swift set to be back, but they signed DJ Chark to play split end and traded up to draft a flanker in the first round, Jameson Williams (the most productive wide receiver in college). Even if Jamo isn’t ready to start the season, he should be playing when it matters most in fantasy football down the stretch. So ARSB has got a battle for targets on his hands and it gets even tougher in fantasy playoffs.

But there are other concerns as well. The biggest one for me is how Amon-Ra St. Brown did his damage. If you go back and watch those games, you’ll notice that he was mostly catching dump-offs underneath soft zones - often times in blowouts. The Seahawks don’t really care if you throw a five-yard out to your slot guy when they are in the process of beating you 51-29. It’s really not any different than the end of 2019 when Jared Goff was dumping the ball down against similar zones to Tyler Higbee in meaningless games. You think the Cowboys cared about Higbee getting a bunch of targets in a game they won 44-21. If Tyler Higbee earned all these targets in his last five games during that stretch, how were defenses able to put him back in the bottle?

And the numbers back this narrative up. Over the entire season, Amon Ra St. Brown only caught 19 passes vs. man to man and only at 9.4 yards per reception. That means the other 71 came vs. zone or plays where he was left completely uncovered. If you take all the players that got at least 20 targets, his average depth of target of 7 yards ranked 124th among wide receivers. That’s why he didn’t crack 100 yards receiving until the end of the season despite getting double-digit targets for four straight games before that. At the end of the day, guys running these types of routes need volume to give us the spike weeks that we need in best ball. Yet even the ARSB supporters are telling me they don’t think his target pace was sustainable.

And that’s just the general warning on players in this type of situation. We’ve seen teams tank with guys producing on skeleton crew teams before. I mean, Kenny Britt had a 1,000-yard season with Jared Goff before they went out and got Sammy Watkins and Robert Woods. Terrelle Pryor, Robert Foster, Keelan Cole, Preston Williams - all put up interesting stretches. The Lions let their split end (Kenny Golladay) and flanker (Marvin Jones) leave for compensatory picks as part of this tank but the rebuild as already begun. Just as the conditions changed in ARSB’s favor last year with injuries, they can change that quickly on the other side. If you want a similar guy who has a real shot to actually lead his team in targets, why not Christian Kirk? Or you could wait even longer and take the aforementioned Jamison Crowder a full 60 picks later.

At WR41 he’s easy enough to avoid but this is best ball so that means he’s also being drafted in 100% of leagues. And wide receivers going in this range are being drafted as either the third or fourth best WR on someone’s team so it’s not a decision that you should take lightly. His ADP still being in the top 85 picks seems to be the classic case of fantasy gamers looking at his production last year and his finish as a WR1 and thinking why not? Well, here is why not.

Sure he finished as WR10 in this format last year. But you have to remember that Darren Waller was hurt for a good chunk of the season. In the games that Waller either got hurt in or didn’t play at all, Renfrow was WR4. In games where Waller played, he was WR24. A pretty stark contrast there. And that was before the addition of Davante Adams. I went back to look at instances where a team had multips guys in the WR2 or better range as well as a high end tight end. It was not often, as this tweet suggests.

So the reality here is that a lot of folks either need to fade one of Davante Adams, Darren Waller, or Hunter Renfrow from where they have them or they need to move Derek Carr wayyy up. And, in this format, we want high upside spike weeks - not low ceiling slot guys. So best to look elsewhere at this ADP. There are similar slot guys who have a better chance at being a top two target on their team that you can get later on like Jarvis Landry. Or you could wait and just take one in a similar spot in the target pecking order like Tyler Boyd at a much cheaper price.