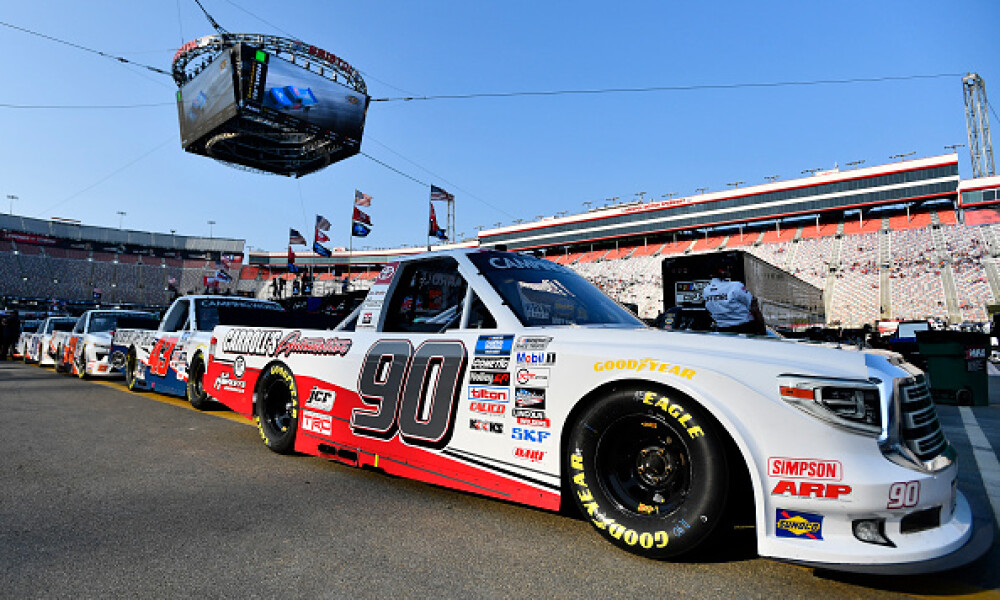 The NASCAR Truck Series playoffs roll into Bristol, Tennessee for the first race on the famed track. Yes, I know they raced here earlier in the year but that was on dirt and this is not. As chaotic as the dirt racing was here in all three series, the concrete surface can still add its fair share of chaos to the proceedings. There’s a reason they call it The Bullring, among other nicknames.

For a refresher on Bristol, it’s a half-mile, high-banked, oval with a surface of concrete the whole way around. Given the size of the track and the surface, it’s not all that comparable to really any other track on the schedule. We can’t really use other short tracks at comparisons because of the lack of banking at places like Richmond and Martinsville. If the Truck Series ran at Dover, we’d have a comparable track, but alas they don’t. So with this being incomparable to other tracks, we’re going to want to pay quite a bit of attention to the practice results and qualifying spots we see on track on Thursday.

Speaking of qualifying spots, we want to pay attention to just how far back some guys might be starting. Just because a driver is starting in the back for some reason, doesn’t mean they are automatically a free play this week. With the laps being so short and the speeds being so much higher on average than a standard short track, lapping is frequent. If a driver starts in the back of the field, there is potentially a cap to their PD if they don’t move up quick enough or get breaks throughout the race to get back on the lead lap. For example, if a driver starts in the 30s but gets lapped early on, they might only be able to finish in the mid-20s rather than a top-20 simply because they get lapped and stuck at that spot in the field. Laps led will be a differentiator in lineups this week. There are 200 trips around the half-mile layout which represents one of longer races of the Truck Series schedule for DFS. The track also sprayed PJ1 on Thursday morning which has made passing here in the past tougher because of the advantage it gives to the lower groove. Keep that in mind as we’re building lineups as well as there still being tire issues come Thursday night.

The following chart shows where the drivers qualified compared to their single-lap and lap-averages from practice.

Starting off with chalk. He blew a tire at the end of Group B and will be starting in the back with a backup car having not qualified. This is a steep price to pay, and for good reason based on the season he’s had, but now the price seems fair given the PD upside he could offer. We did say above that there is a danger of being stuck in the mid-pack when starting in the back, but that shouldn’t be an issue for the quality of equipment Nemechek is in.

This is the most expensive he’s been this year. He will still be chalky though. Smith had a parts issue at the end of practice with a fluid leak and will be starting in the back of the field after not running a qualifying lap. Given what we said above about perhaps getting stuck in the mid-field, you can get away with potentially fading Smith a bit in GPPs assuming he struggles to get back up front, though the speed is there for him to do it assuming luck is on his side.

He was top-three in overall lap averages at practice which shouldn’t be surprising. He’s in a KBM truck. In the last four races this year, Heim has been no worse than P7 and on the two short tracks, including IRP, he was P5. We will need him to lead laps to hit value on Thursday night though given the $1,000 higher price tag than we saw for him at Richmond.

He won this race a year ago and has been very good at short tracks much of this year. That includes leading 176 laps at Richmond two races ago. He’s got a shot to clinch a spot in the title race with a win here, the first race in the Round of 8. The practice speed put him P3 in 10-lap average and best in 15-lap average, but he is in a KBM truck which is a huge benefit here, as they’ve won eight times here previously.

He’s never finished outside the top-10 at Bristol and he’s the only playoff driver to finish in the top-five at all three races in the last round. That kind of consistency is tough to turn down at a track like Bristol for sure. While there hasn’t been the laps led speed in the track this year, he’s still been posting solid finish after solid finish and that’s good enough for DFS.

Majeski might be my favorite play of the night. He came out with a ton of speed in practice and if we look at the prior two short tracks, he’s led 71 and 73 laps in each. Speaking of the speed, he led the field in 10-lap average in the abbreviated practice sessions. With the top plays above stuck in the back of the field, expect Majeski to be the most popular pick to lead laps early and often.

He was P12 in the single-lap speeds but P8 in the 5-lap averages. That’s what we’re looking for here. We need the trucks that get faster as they go which is what Rhodes has been doing basically all year. There’s also the fact that he finished P2 at IRP three races ago. In the last three races here, he’s posted an average finish 10.0 with two top-10s. That’s good enough for a guy who’s in the top of the mid-tier this weekend.

Friesen loves racing here and it’s shown with two top-fives in the last three races he’s run here. At practice, he was P1 in 5-lap average, P2 in 10-, 15-, and 20- lap averages. That tells me he has a car that should hang in the top-five much of the night. The speed combined with his knowledge of how to get around the track in race conditions makes him a very serious threat to have a good DFS night at a reasonable price.

Like a few others in this playbook, Crafton has been consistent here. He’s posted an average finish of 8.0 and three top-10s in the last three Bristol races. Then on Thursday he shows up and runs the fourth-best 10-lap average at practice. He did qualify P16 which gives him some nice PD upside in the mid-tier as well. At this price he’s really an ideal guy to fit in both styles of build with little downside and a good amount of upside.

The pole-sitter at Bristol — get ready to see a popular play. Couple that with great speed in the trucks from the team this weekend and this price tag. It’s tough to see him not being one of the top played drivers in builds. Kraus also had top-five 10-lap average speed and top-three 15-lap average speed at practice. This all bodes well for him sticking near the front for the bulk of the race not to mention that half of his career poles have come on concrete tracks.

Ankrum put on a good speed show at IRP when starting P11 and finishing P6. Now he shows up to Bristol and ran P7 in 10-lap average at practice before qualifying P12 for the race. He was this same price at IRP with basically the same practice and qualifying results as we’re seeing this weekend. I’m liking the cross-over we’re seeing at the two tracks for Ankrum.

This is DiBenedetto’s first race here on the concrete in a Truck. He’s been very good here in the Cup series and nearly won a few years ago over Denny Hamlin. In Group B of practice he ran the fastest single-lap and the second-best five-lap average but that’s not a ton to go off of in terms of long-run speed. He’s not had the best year to be sure, but that doesn’t mean he can’t have a good race at one of his best tracks in the higher series.

He nearly won at IRP a few races ago. He was leading until JHN took him out in the closing laps. Now, he’s bringing that same speed to Bristol for his debut here. There was a bunch of speed at practice over both single-lap and lap averages before qualifying about in the same spot as he ran in practice. Considering how loaded the mid-tier is, Gray might be overlooked a tad on Thursday night.

Caruth impressed quite a bit in his debut at Gateway. Now, at his debut at Bristol, he’s shown up with good speed in the track. He ran a very fast single-lap at practice, with the ARCA series rubber still on the track, and then ran the eighth-fastest 10-lap average. He’ll have a nice starting spot as well which shouldn’t need him to move up all that much to hit value at this price. One other advantage that Caruth has is that he’s running the ARCA race which should give him more much-needed track time, granted in a different vehicle.

The results haven’t been great for the youngster for much of this year with his struggles being worse at short tracks. Why is he in the playbook then? Well he showed top-10 10-lap average at practice and then went out and posted a very racy qualifying time. If he can avoid the chaos on Thursday, it could be a good showing for him for once. Like most drivers this cheap, it’s a tournament play given the struggles he’s had.

How about some cheap speed? He’s only about two-tenths off the top average in 10-lap average. There isn’t much to go off of other his practice speeds on Thursday as he’s not had the best runs in his brief time in the Truck Series this year, so he’s best relegated to GPPs in the hope that he can use that practice speed in the race and avoid issues that have cost him spots in prior times behind the wheel.