Two-Start Pitchers/Streaming Starters: A Pair of Starts for Yu Darvish 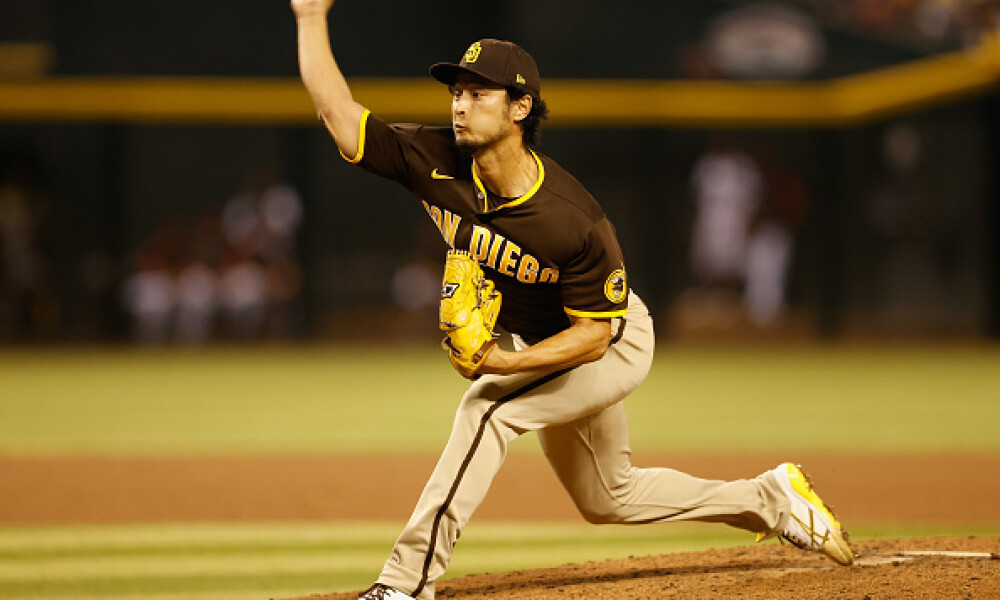 The 2022 fantasy baseball season is under way! After months of research and lockouts, we've finally kicked off the season so I would like to welcome you to the recurring Two-Start and Streaming Starting Pitcher article. Each week, we examine those pitchers that are slated to pitch in dual starts, and then take a gander at the lower percentage owned arms that might be available and desirable to pick up off the wire or free agent market for a start during the current scoring period.

These are the hurlers you want to express gratitude for having had the wisdom to add to your rotations during the recent draft season. Wind them up, let them go and reap the benefits. These arms are useful for fantasy purposes no matter the opponent or the venue where they will ply their trade.

Hernandez, the Marlin 26-year-old righthander, promises to provide good K numbers, likely better than a strikeout per inning pitched. He also exhibits nice control while toeing the rubber, with a useful 2.44 BB/9 over his 51.2 IP in 2021. His home/road splits have been fairly consistent the last couple of seasons, so having just one home game at the end of the period against the visiting Phillies is not a major concern.

Taillon recovered well from his second Tommy John surgery in 2021, exhibiting good if not superb control (2.74 BB/9 over 144.1 IP) and coming close to striking out a batter per frame (8.73 K/9 last season). Look for more of the same as he settles into his slot in the Yankee rotation. His tougher matchup against the Blue Jays is at home, with his second trip to the hill occurring in Baltimore, making him a useful two start option in Week 1.

The young Brave righty burst onto the scene last season, and things were going gangbusters until he decided to punch an unyielding surface…with his pitching hand. Huge no-no that. He came back into the fold, but was not nearly as dynamic, posting an 0-4 record and inflated 5.05 ERA over those final 46.1 IP. Still, his skills were evident prior to the self-inflicted injury, and the projections if they come true show him as a sub-4 ERA candidate that demonstrates good control and thus useful WHIP numbers, while providing better than a K per inning. His home/road splits are much more tilted toward him as a home start option, so keep that in mind when he takes the ball in San Diego for his second start of the scoring period.

The veteran righthander was dealing with some knee soreness this spring, but has been cleared to start games this season for the Mets. There is little tremendously exciting about Walker, but he does offer a valuable WHIP to bolster your ratio stats, and a 4.00 neighborhood ERA is useful at the back of your rotation. His fastball is in the mid-90 MPH range, but his K and BB numbers are just average. His home park is pitcher friendly, so when the Diamondbacks come a’callin’ at the end of the week, that seems the optimal time to use him in your rotation.

Patino projects to be a quality provider of ratio stats as a member of the Tampa Bay rotation, and has the added benefit of offering better than a strikeout per inning while he is atop the hill. Last season saw him struggle more on the road than at home, so his second start against the White Sox in the Windy City might give some pause among his owners and discretion might advise using him just for the home start at the beginning of the week against the visiting A’s.

The Brewer righty was one of those who was affected by the implementation of the MLB ban on foreign substances mid-2021, as it effected his curveball rotation dramatically. He still profiles as a useful ratio producer, and his owners should expect useful 3.60-3.70 ERA ranges on an elevated GB rate (59% in 2021 over 142.1 IP). His walk rate is a tad elevated and thus his WHIP is not in the elite range, but he should be a fixture in the Brewer rotation this coming season.

The Ranger rotation is nothing overly exciting on paper, and thus Hearn settles in nicely in Arlington. He has a pair of home starts on tap in Week 1, and while he is not exactly one who thrives on pitching in his home park, at least he is not heading off to foreign territory to open the season. Facing the Rockies away from their home park is a definite plus, and having the Angels come to visit not a fear-inducing event.

The last entry in the middle tier has been inserted into the Royal rotation and needs to pitch well to maintain that role. Just as with the Ranger hurler above, he has a pair of home starts to set the stage for his season in Week 1. He should provide nearly a K per IP, and despite a middle of the road BB average, his WHIP should not be so great to be a detrimental reason to avoid using him in limited action.

The Red Sox have been allowing their 30-year-old SP4 righty to stretch himself out in a pair of spring contests, and while he has collected just a pair of Ks over those 7.0 IP, he should be better than that a missing bats now that the games that count in the standings have commenced.

Davidson showed enough in the spring and in his brief action in 2021 to make the opening day roster for Atlanta. He has a tougher matchup facing the presumptive for now National SP1 in Corbin. He does get to do so at home, so that plays in his favor.

With injuries sidelining both Mike Minor and Luis Castillo to open season for the Reds, the rookie southpaw will have at a minimum a small window to showcase his skills on the bump. He offers high K potential, and has demonstrated excellent control this spring (12:2 K/BB ratio over 11.1 IP). He gets to face in-state rival Cleveland at home here in his first MLB start.

Not exactly the best matchup but at least the weather will be presumably warmer than in his first start of 2022. He struggled with his control mightily during a cold-weather start against the Braves, which limited his outing to just 2.1 IP where he was charged with five earned tallies on four hits and five walks. His minor league work suggests he is better than he has shown so far.

Yet another poor matchup, but Dunning is at home here, where he has enjoyed significant success over the past couple of seasons. He should be good for about a K per inning, although he does not exhibit the best control. He does keep the ball in the park, with a superb GB% in excess of 50%.

Reports out of spring training are that the Royal third-year southpaw has added a slider to his repertoire on the hill, and with an uptick in velocity on his fastball, he should see his K rate improve heading into 2022. Here, he has a home start against the revamped Detroit lineup, so this should be a decent test of his continuing development as a starting pitcher in the majors.

Either the options are two-start pitchers profiled above, or are too widely owned across fantasy leagues to make the cut here at the end of the week.