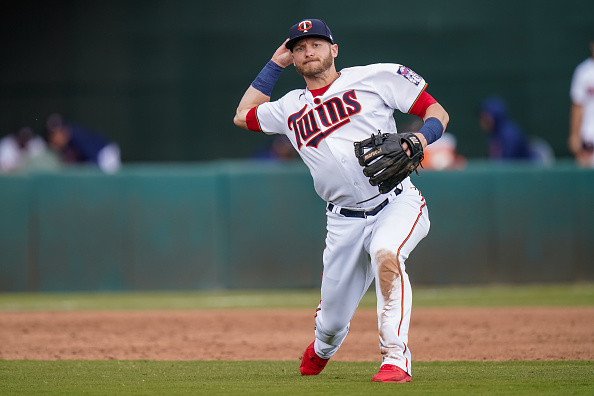 The third base position is rather deep this year, and there’s a lot of enticing options, headlined by Nolan Arenado and Alex Bregman . The guys that come after these two are enticing as well, notably Cleveland’s José Ramírez, Toronto’s Vladimir Guerrero Jr , and San Diego’s Manny Machado . Each week, we will take a dive into this position in particular and figure out what to do with the position, whether it’s examining producers at different categories, overvalued players, undervalued players, etc.

For the sixth installment, let’s take a look at one guy in each grouping of about 100 players, per NFBC data, that are players worth grabbing for your team. If you miss out on the big guys, these guys can either come close to replicating value, or at the very least, provide you with a sizable return on your investment.

I debated heavily here between Mike Moustakas and Donaldson. I love that Moustakas has multi-positional eligibility, but ultimately, I chose Donaldson. He gets a slight park boost from where he was before, whereas Moustakas is likely similar, all things considered. Donaldson is a premium power bat, and yes, injuries are a potential issue here, but he stayed healthy last year and swatted 37 four-baggers in 155 games. Now, in the American League, he can serve as a designated hitter some days, which is a huge boost!

Last year, Donaldson registered the fifth-highest average exit velocity on fly balls and line drives, per Baseball Savant. His fly ball rate of 36.4 percent was his second-lowest mark since 2014, and his line drive rate has stayed within a few percentage points each season. If he continues to hit fly balls, and hit them hard, he’s going to be just fine in Minnesota. Expect big power numbers from Donaldson this season and he’ll easily outperform his current average draft position.

Yes, back-to-back Twins! Sano is another favorite of mine. Unlike Donaldson, he’ll garner dual eligibility, as he expects to serve as the team’s primary first baseman this season. I do believe the move to first base should alleviate some of the injury concerns, but of course, not all of them. What Sano did last year is likely unrepeatable, largely his 11.2 AB/HR mark he posted last year. Thirty-four home runs in just 380 at-bats is absurd, and while some regression is expected there, this sort of power upside is attractive in a shortened season. I mentioned this in an earlier positional preview, but it applies again:

He's going to strike out a lot. Deal with it.

In time, he should move up in the order, and there will be guys on when he’s hitting balls over the fence. I won’t deny the risk here, but he, and Donaldson, should end the year as top 10 performers at their position.

If you need some speed from the position, you can wait around for Berti. He’s going outside of the top-200 picks at the position, and don’t worry, third base isn’t the only position on his ledger. He has eligibility at multiple positions, as he appeared in at least five or more games at center field, left field, shortstop and third base. He went 17-for-20 on the base paths in 73 games last year, and he’s 18-for-21 in 77 career games. His sprint speed came in at the 98th percentile last year, and it’s good he’s fast, because his batted ball profile isn’t anything exciting.

His 3.8-percent barrel rate is below average and his 86.5 average exit velocity is even worse. He’s going to ride a high BABIP to maintain a decent average, but his .273 average last year is a bit fluky, considering his xBA was just .258. The most encouraging this for me is that he posted a solid 8.4 percent walk rate. That will help him continue to get on base and the Marlins are going to let their guys run. Honestly, they have no choice but to do such a thing!

If you want speed at a value at this position, look no further Miami’s Jon Berti.

Slam dunk. I’m all in on Franco this year. He’s in a spot to play every day and he was a victim of bad luck in 2019. Franco struggled statistically in 2019, but he still hit 17 home runs in 123 games, and despite the batting average plummeting, he walked more, and struck out at a similar clip to years past. Furthermore, he set a career-high in hard contact rate, and his 1.08 GB/FB ratio was a career-best. His .236 BABIP was his second-lowest mark in the past five years, and his xBA of .243 is still better than his .234 average from last year.

Once he moves up closer to the middle of the order, Whit Merrifield and Adalberto Mondesi will distract opposing pitchers, giving Franco plenty of chances to drive in some runs. Also, as I say with most cheap guys, it’s honestly a win-win situation at this point in the draft. It’s nearly impossible for him to not return on your original investment, and if he stinks or gets benched, cutting your 23rd round pick isn’t going to keep you up at night.

Not the flashiest play here, and I get that, but there’s value to be had.