Pitching In: Better Days Lie Ahead 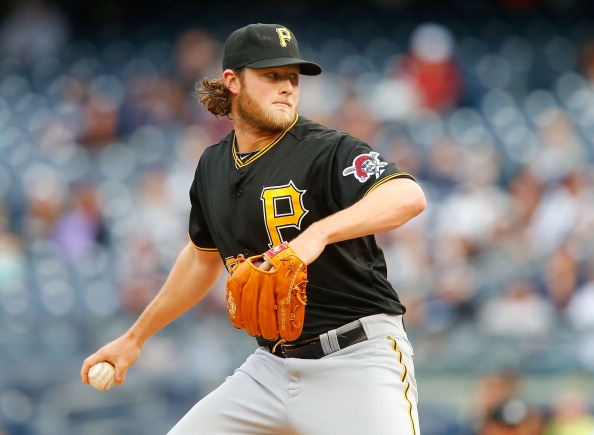 Today we’ll take a look at ten starting pitchers whose May ERA is a bit unsightly but are good bets to make a category impact in pitching (wins, ERA, WHIP, K) sooner than later. They all won’t be pick-and-stick worthy in shallower mixed leagues, but if deployed properly, they have a place on a fantasy roster.

Justin Masterson, Cleveland Indians – May as well start with one of the bigger enigmas of the past few weeks in Masterson. As a side-winding right-hander, his modus operandi has been to eat up righties, inducing groundball after groundball. His ultimate success revolves around the damage inflicted by lefty swingers. His whiff rate is historically above average though he can have bouts of wildness. In his last three outings spanning only 16 innings, Masterson has issued 12 free passes. Even though worm-burners are prone to a high BABIP, the 17 hits allowed in this stretch isn’t too out of line. Compounding matters is Masterson’s velocity is down a bit which may be an injury harbinger. Let’s assume he is healthy. On the plus-side, he has fanned 12 over these three games, albeit only one last time out when the Athletics took him to town for eight earned in 4.1 frames. With the track record of success Masterson owns, it’s far too early to give up on him, though reserving him for an outing or two is defensible. Track his walks and velocity. If his control is back to normal, he’s worth starting at home. If the radar gun shows improvement as well, Masterson is back to being a near-automatic start. By all means, if he is dropped in your league, pounce all over him.

Gerrit Cole, Pittsburgh Pirates – No one is going to release Cole but many may be contemplating sitting him based on a May ERA of 4.74 with a rather nasty 1.42 WHIP. DON’T DO IT! Fanning 27 while walking only 7 in 24.2 May innings is a far better indication of how Cole is throwing. He’s been victimized via a high hit and home run rate this month.

Homer Bailey, Cincinnati Reds – Like Masterson, Bailey’s track record is that of a solid fantasy starter but his numbers to date are causing his owners to cringe. Bailey’s velocity and pitch selection matches up with recent seasons so health shouldn’t be a concern. His control is off a bit, but a 3.2 BB/9 isn’t terrible. Bailey’s been snake bit with a .348 BABIP against combined with a HR/FB of 18.4 percent. Bailey’s xFIP is a promising 3.64 (assumes hit rate correction with a normalized HR rate) so if his owner is antsy and looking to sell, give Bailey a home.

Jason Vargas, Kansas City Royals – For the season, Vargas is a very respectable 4-1 with a 3.00 ERA but an April mark of 2.40 has ballooned to 4.34 in May, causing some owners to consider selling high while they still can. Calm down and again focus on the peripherals. In 18.2 May stanzas, Vargas has whiffed 17 while only issuing three free passes. Further, his numbers at home are much worse than on the road which is an aberration. Kaufmann Stadium favors pitching and come September, the numbers will be in line.

Hiroki Kuroda, New York Yankees – Take away a gem against the Angels and Kuroda has allowed 10 ER in 18 IP this month. Take away all the pizza and doughnuts I’ve consumed and I weigh 180 pounds, but I digress. Over that span, Kuroda sports a 17/3 K/BB. Some are wondering if Father Time is catching up to the 39-year old righty. No worries, he just needs Lady Luck to lend him a hand – or at least stop being so bitchy.

Bartolo Colon, New York Mets – Colon is punching out more and walking fewer than in recent campaigns. This is good. The opposition’s BABIP is .330. This isn’t so good but should regress along with a slightly elevated HR/FB rate. Colon is perfectly safe to use at home and in most road tilts. He’s a fly ball pitcher so avoiding homer-friendly away venues is justified.

Marco Estrada, Milwaukee Brewers – One of the more tantalizing fantasy teases of recent seasons, Estrada is supplying the “I told you so” crowd with plenty of ammo, sandwiching three May outings with a 5.82 ERA around a 6-inning, 1 ER, 8 K gem. Each of the poor May outings featured a pair of homers. Please don’t misinterpret; there was likely some bad pitching at fault. But there was also some misfortune where some long balls came clustered. Estrada is carrying a very respectable 8.4 K/9 with a 2.6 BB/9 so once the homers abate, and they will, Estrada is an above average fantasy performer.

Chris Archer, Tampa Bay Rays – While it is true that Archer’s control isn’t as sharp as last season and he’s a little unlucky with respect to BABIP, he’s also being burned by a low LOB%. Many refer to LOB% as strand rate which is probably OK at this point since the term is basically in the public domain but to be fair strand rate is a term (and formula) developed at Baseball HQ with the calculation slightly different than LOB% which is definitely in the public domain. Both measure the percentage of base runners that score. The key is percentage as LOB%/strand rate is a rate stat and is independent of the number of runners put on base. It is solely a measure of how many of those base runners are left on – or stranded. The notion is the timing of hits is random (no such thing as clutch) so like BABIP and HR/FB, pitchers should cluster around a mean LOB%. Simply put, not only is Archer allowing a few extra runners, an inordinately high number of them are crossing the plate. Probability suggests regression is coming which will lower Archer’s ERA.

Jacob Turner, Miami Marlins – Turner’s pedestrian strikeout rate renders him risky for mixed league deployment but he’s a whole lot better than his 6.59 ERA suggests. His xFIP is a far more palatable 3.71 which bodes well going forward, especially since Marlins Park will help normalize the long ball assumed by xFIP. The Marlins are scoring some runs so once Turner's ERA corrects, his winless season shall cease. Turner is a decent buy low for National League only formats and is a viable candidate to spot at his spacious home digs.

Roenis Elias, Seattle Mariners – After twirling a 3.08 ERA his first six starts, Elias has followed up with a 4.91 mark his last three games leaving his owners wondering if it is time to cut bait. Skills-wise, Elias has actually been better the last three outings so if you trusted him coming into the season, don’t let some bad luck with LOB% scare you off because that’s the difference. Elias has been a victim of victim of a low LOB% in May. Like BABIP and HR/FB, over the long haul it will regress to league norm and Elias will enjoy an ERA correction. He’s still not mixed league worthy, at least not away from home, but American League only players can continue to use Elias and sleep easy.