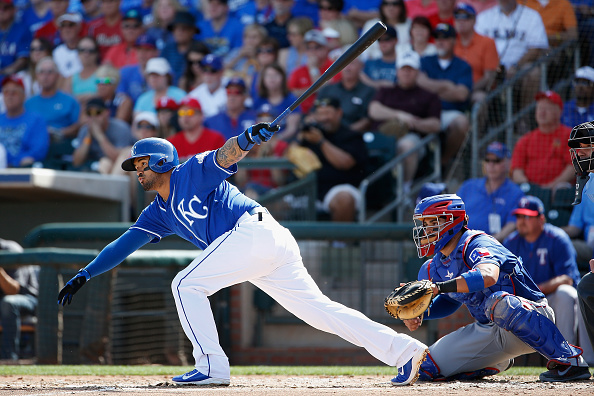 Surprisingly, there’s a significant amount of stable depth at the keystone this year. Sure, we’ve got a few position battles we can discuss, but for the most part, I really like the way this position is stacked up. You can obviously choose to invest heavily in Jose Altuve, Dee Gordon or Robinson Cano, but there’s also nothing wrong with waiting on the position for a 10th round Kolten Wong or even a 17th round Neil Walker. You have to remember that position scarcity doesn’t automatically mean middle infield or catcher. It’s about positions where, if you don’t act reasonably quickly, you’re going to be left with nothing but garbage in the later rounds. That, my friends, is not second base this year.

During the offseason, Owings was considered to be part of a platoon at shortstop and move over to second base when the team was facing a lefty and Nick Ahmed would enter the lineup. Drury, who would have been at second base, would then potentially move to the bench. But when the team traded for Jean Segura, Owings was shifted over completely and now he and Drury find themselves competing for the job this spring. While Owings has yet to show some of the pop he displayed in the minors, he’s got decent speed and a solid glove. Drury is certainly deserving of a shot to compete, but recent comments from Arizona skipper Chip Hale now make us believe that Drury is looking at a stint in Triple-A again. Hale said that he considers Segura to be “almost an everyday player if he can handle second base.” Translation: Nick Ahmed is playing short against lefties and now Segura and Owings are going to battle for playing time at the keystone. In all likelihood, the guys swinging the hottest bat against southpaws is going to get the work, plain and simple.

It’s a matter of “out with the old and in with the new.” Infante is the guy listed atop the depth chart but given his level of frailty in recent seasons, he just might be relegated to more of a utility infield look if Colon shows this spring that he can handle the work both in the field and at the plate. The glove work isn’t really much of a concern with Colon right now. He still has some learning to do, but it’s likely to come down to his offensive work. Over 168 big league at-bats, Colon has proven that he can hit for a high average and post a strong on-base percentage. There’s little to no power in his bat, but he does have some speed. Infante will get the benefit of the doubt because Ned Yost loves his veterans, but given the injuries, he just may not last too long.

If you read these names and just threw up in your mouth, it’s totally understandable. Neither player evokes a feeling of security should you get stuck with one of them at your draft. Giavotella has made strides with his glove over the past few seasons between L.A. and Kansas City, but his bat hasn’t shown a lick of improvement. There’s no power to be had and while he did hit .272 last season, his .318 OBP was more representative of his struggles. He doesn’t strike out very often, but a subpar walk rate and an inability to make any sort of real hard contact makes him an easy out on most days. Still, it’s probably better than what Pennington can offer. The two could actually be fraternal twins where each one ate the other’s talent inside the womb. Angels manager Mike Scioscia will lean towards the better defense and whichever one gets the playing time will likely hit at the bottom of the order.

Good evening, Mr. Hanson. Your table is right this way. Welcome to the show, we hope you enjoy your stay. Or maybe you won’t. Maybe you won’t even stay. That will be up to you. The 23-year old has actually been working his way up in the Pirates system for six years and after solid showings at both Double and Triple-A over the last two years, it looks like the Buccos are going to give him a genuine shot to earn the second base job. With super-sub Jordy Mercer on the roster, the Pirates can afford to give Hanson a real long look. If he thrives this spring, then Mercer will stay on the bench. If he doesn’t, then Harrison moves to the keystone, Jung-Ho Kang takes the hot corner and Mercer slides into the shortstop position. Hanson has some great speed, as evidenced by his 60 steals in the last two years, but is still working on his on-base skills at the higher levels. A strong start to spring games right now is encouraging, so keep an eye on him over the next month.

This isn’t really a position battle, but more just my lack of faith on Forsythe. He’s been a utility man throughout his career but finally had a breakout season at age-28 when the Rays needed him in the lineup regularly. Now, maybe he can continue down this path, but there has to be some skepticism here. He’s never displayed the power he showed last year and there’s a reason he’s never been able to earn a regular spot in the lineup, whether it was in Tampa Bay or San Diego. The Rays have long considered Beckham a decent prospect and while Forsythe hit lefties fairly well last season, there’s definitely a strong chance that if he doesn’t live up to last season’s levels, Beckham could get some extra work thrown his way. Again, Forsythe is the guy for now, but do you want to put your eggs into the basket of this late-bloomer when there is so much talent at this position?

Similarly to the Rays situation, this is merely a situation to monitor, not a genuine position battle. Odor’s breakout season last year was solid and he’s only 22 years old. His numbers, including his power, were right in line with his minor league development and if he can continue to make such above-average contact, then he should continue to succeed, even with such a feeble walk rate. But let’s not forget entirely about Profar who many of you were jerkin’ your gherkin to when he was first coming up to the majors. His shoulder issues have been a major problem obviously, but it looks like he just might be at full health for the first time in over two years. I’m not saying that he’s going to supplant Odor, but there is an opportunity, he just might still have enough talent to push his way through the door for some at-bats.

It’s all going to come down to the health of Travis here in the start of the season. The 25 year old really burst onto the scene early last year, but a shoulder injury put him on the shelf and he was lost for the duration of the season. He had surgery in November and was given a 16-20 week recover timetable. The Jays expect him to return to the field around mid-to-late April and if all of that goes off without a hitch, he should be at the keystone in Toronto for the rest of the year. While he’s out, Goins is the favorite to earn the starting nod with perennial utility man, Barney, filling in the gaps. Most people are sleeping on Travis in drafts right now, so keep him on your radar and if you have the ability to stash a guy on your DL to start the year, he could be a great pick.