Behind The Breakout: Dansby Swanson 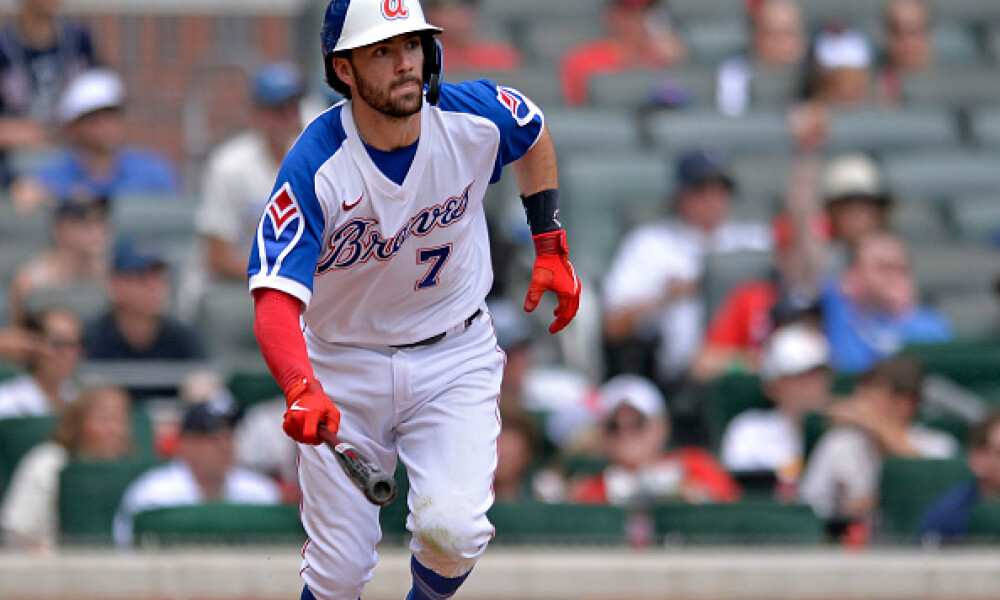 Not all breakouts happen under the same circumstances. A lightning bolt of past arguments regarding fantasy status, Dansby Swanson continues his breakout season with his team's best player on the injured list. Riding a streak of five straight multiple hits games entering game action on Tuesday, a surge over his last 37 games with 52 hits (24 extra-base hits) in 151 at-bats (.344), moved Swanson's average from a paltry .226 to a palatable .264 through 120 games played.

He's already set a career high in home runs (24), ranks fifth in the National League in extra-base hits (54), tied for fifth in total bases (224), tied for eighth in RBI (72), ninth in doubles (28) and 10th in hits (120). Yes, that Dansby Swanson. It surprised me as well. Through 495 plate appearances he's scored 63 runs with none stolen bases added to his numbers above and a .264/.316/.493 slash line. With a career high in isolated power fueling his career mark in home runs, it's clear he's entered his power peak during his Age-27 season.

Could his breakout be masked by a hot streak? It's certainly possible but after going through a consolidation of his skills in 2020, Swanson's emerged with some intriguing improvements. Looking at his Statcast data, he's recorded 336 batted ball events with 42 barrels (12.5 percent), a 37.2 sweet spot percentage and a career best 45.8 hard hit rate. Noting expected statistics reflect quality of contact, he owns a .260 expected batting average, a .478 expected slugging and a .341 expected weighted on-base average (xwOBA). Here's his xwOBA rolling chart with the spike of his recent output standing out:

While his chart reads like an EKG, seeing the sustained gains in the second half of 2021 along with his hot stretch earlier in the season provides hope going forward. Even with his line drive rate down by seven percent compared to last season, Swanson's still producing hits at a high rate and with his improved numbers over the last 37 games, positive migration to the mean occurred with some more still on tap.

Diving into his discipline and batted ball direction, there's more building blocks in place. He's increased his zone swing percentage and zone contact rates this year with an increased swing percent overall but reduced his whiff rate. Growth, and he's faring well on pitches in the strike zone evidenced by his swing and take chart:

Add in some line drives and better results on pitches in the shadow zone, and his average could jump into the .275-to-.280 range. With some improved batted ball results, he's using the opposite field more and pulling the ball less. Again, growth. Currently ranking in the 94th percentile in barrels, Swanson's putting together a strong fantasy campaign without much acclaim. Even taking into account a career high in home runs with six weeks remaining, he's generated 11 no-doubters (out of any major league park) for a robust 45.8 no-doubt percentage of his 24 home runs.

Now, for the best part. Over his last statistical year, our breakout candidate's one of three qualified shortstops with at least 30 home runs and 10 stolen bases, joining Fernando Tatis Jr. and Marcus Semien. Over his last 158 games, Swanson's logged 670 plate appearances with 97 runs, 32 home runs, 93 RBI, 11 stolen bases and a .266/.326/.493 slash line. With a 7.5 walk percentage and 24.5 strikeout rate, his discipline marks seem to be settling in. Compared to his peers at shortstop, he ranks tied for second in home runs, third in RBI, tied for fifth in runs and tied for 15th in steals. Here's his spray chart from the last 365 days:

Best part, he's not a name brand like Francisco Lindor, but has been more productive over the last statistical year. Swanson's hit more home runs than Javier Báez, with a higher average, scored more runs and drove in more runs, but people chase perceived upside in drafts, not solid contributors. Keep this in mind for 2022 when targeting shortstop or a middle infielder who produces across the board in fantasy.

As for the rest of this year, any home run hit adds to Swanson's career high total. When viewing his projections from different sites on Fangraphs, there's a chance he reaches 30 home runs this season, which already occurred in his last 365 days worth of data:

Setting baseline for 2022 depends on how he finishes in terms of batting average, but with his underlying data backing up this season's results through his first 120 games, consider this his breakout campaign, right on schedule.