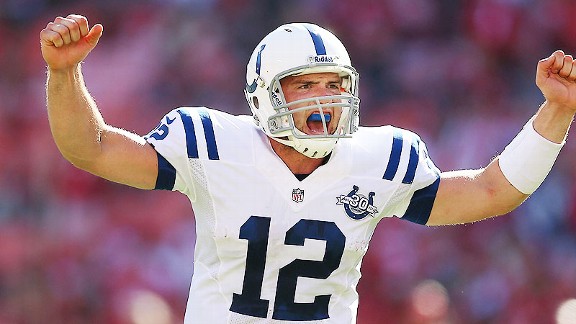 There is little doubt that we are living in a quarterback-centered football universe. Since the emergence of Peyton Manning and Tom Brady in the early 2000s, the game has seen a drastic shift away from run heavy offenses to pass happy playbooks. Fantasy players, always innovative, have looked to take advantage of the changes in the game and now, 2-QB leagues have erupted as a popular format that certainly has a deep strategic element.

If you are brave enough to take on the challenge of playing in a 2-QB League, you need to have a clear strategy going into your draft. The standard blueprint of taking running backs and wide receivers early isn’t going to work. Instead, an elite quarterback is a must. Below are several tips and strategies to use as you prepare for your upcoming 2-QB draft.

Yes, we all know that Andrew Luck and Aaron Rodgers are elite, but did you know that Russell Wilson finished third in standard league scoring last season? Luck threw for almost 1,300 more yard than Wilson last year, but finished just 24 points ahead of the face of the Seahawks’ franchise.

A quarterback that is always ranked in the top ten is Matthew Stafford. Given the weapons that he has at his disposal in Detroit, that really comes as no surprise. After his huge breakout in 2011, Stafford has seen his production dip in each of the subsequent years. With a knack for throwing interceptions, combined with his recent decline, Stafford is more of a name than production.

After bursting on to the scene in 2012, Colin Kaepernick has been a popular pick at quarterback over the last two seasons. It’s somewhat baffling that Kaepernick was being drafted ahead of veteran commodities like Ben Roethlisberger and Eli Manning last season.  It’s safe to say that Kaepernick wasn’t on very many championship teams in 2-QB leagues.

No matter where you pick in the first-round, you are guaranteed to get a stud player. The question is whether or not that stud is a quarterback or not. This is the only type of format where not drafting running back or a top-flight wideout in the first-round is a strong strategy, so it is important to play into that.

In a 12-team league, it is almost a foregone conclusion that Aaron Rodgers, Andrew Luck, and most likely Drew Brees will go in the first-round of any 2-QB league. My advice to you is pouncing on any of the three no matter where you pick if they are available. The thought process behind this is that if other owners see quarterbacks going off the board quickly, they are more likely to panic and take a lesser QB in a bad spot. In turn, this will open up the available talent as you head into the second and third rounds.

Let’s say that you’re picking 11th overall and Rodgers, Luck, Brees, Peyton Manning, and Russell Wilson have all been selected. This is where you have to do some quick soul searching and decide whether you want to go with a quarterback such as Ben Roethlisberger or Matt Ryan or take a top running back or wide receiver with your first-round pick. No make mistake about it, this is the only format where you could conceivably get Jamaal Charles or Eddie Lacy at the turn.

If you do choose to pass on a quarterback in the first-round, it is imperative that you grab one coming back in the second-round. Punting your QB1 past the second round is like walking into a burning building with a can of gasoline.

Knowing that you have to start two quarterbacks each week, should you go ahead and take care of both spots in the first two-rounds? There is no easy answer to this question as it depends on how things play out during the early stage of your draft.

If you are able to land Luck or Rodgers in the first round and Big Ben or Russell Wilson falls to you coming back, then absolutely.  Shore up your team with two top five QBs and look for value at wide receivers going forward.

If you can’t draft a bonafide stud to use as your QB2, it’d be wise to pass on the position for a round or two and grab an elite running back or wide receiver (preferably running back as the position fades much quicker). Remember, the key to any successful fantasy team is balance.

In any fantasy league, there are owners that like to play the punt game. It is common in baseball with the saves categories; it is also a losing strategy. Sometimes common sense needs to take over and being cute should be thrown out the window. In a 2-QB league, you will totally bury yourself by waiting on a quarterback until the latter stages of your draft. If you waited until the 8th or 9th round to take your first quarterback, you could be staring down the barrel of 17 weeks worth of Alex Smith and Robert Griffin III. If you can win your league with that combination, you’re the real MVP.

Let’s say you drafted Aaron Rodgers in the first-round of your draft and decided to load up on running backs and wide receivers from the second-round going forward. Things are looking great and you’re finding value everywhere until you realize it’s the 9th round and Ryan Fitzpatrick is your best option. So, what do you do? Go ahead and take Fitzpatrick and then start studying matchups on a weekly basis.

Be sure that you know how your waivers/free agent wire is setup. If you are given FAAB (Free-agent acquisition budget) money to make pickups, this could be tricky, but spending a couple of bucks per week on lower-tiered quarterbacks with strong matchups could be a strategy that pays off, especially if the rest of your squad is rock solid.

This may be the most obvious statement you've ever read, but to be competitive in 2-QB leagues, you need to be strong at the quarterback position. As previously noted, balance is the key, but coming out of the second-round without a quarterback is detrimental to your overall success. Build around your quarterbacks and find value late. This isn’t the only way you can hoist that trophy at the end of the year, but it is damn sure your best bet.

Join me next week as I look at a… NO RUNNING BACK STRATEGY!?