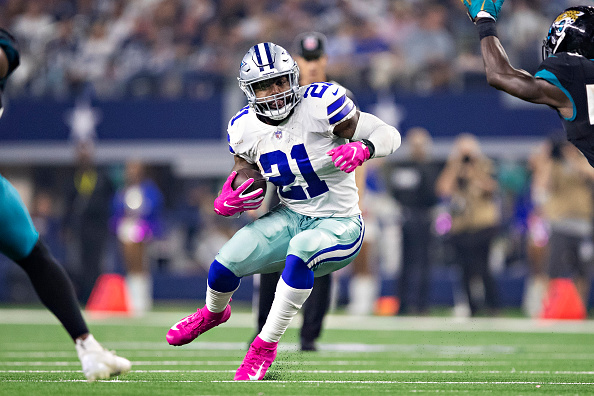 Welcome to the twelfth edition of the RB previews! I recently hosted a Fantasy Alarm Best Ball league and I didn’t love how my running back core turned out. I nearly always go heavy on running backs early in drafts and after not doing so in this draft; I want to stress the importance of doing so in this piece! Without further ado, let’s dive in!

Some people may argue this with their love of the Zero-RB strategy, but personally that’s not for me. Can it work? Sure; however, it is riskier and you have to hit on the running backs that you take. For the most part, the running backs that are good during the season are the running backs that we thought would be good prior to the season starting. They get the touches necessary to score fantasy points on a consistent basis. You aren’t finding backs late in the draft that will be getting 20+ touches anytime soon (unless an injury occurs). For that reason, grabbing running backs early is pivotal! In that recent Fantasy Alarm draft, I had just one back through three rounds and by the end of the draft I felt pretty thin at the position. Lesson learned! Let’s take a look at a few examples that I remember from the 2019 season...

Last year’s winner of the Razz Bowl (an overall winner best ball format that consisted of 15 leagues filled with 140 fantasy analysts and 40 fans), somehow managed to land Christian McCaffrey , Dalvin Cook , and Derrick Henry . That running back core carried him to the title. As for me, I landed a top-20 overall finish in the Razz Bowl with a running back core of Le’Veon Bell, Derrick Henry , David Montgomery and Kenyan Drake – all of which I selected within the first six rounds. Change that first pick from Bell to Cook and who knows; maybe I have a crack at the title. High-end running backs bring you consistency and stability on a weekly basis, which is crucial to success, especially in best ball leagues.

Speaking of best ball leagues, for my highest scoring BB10 team from last season I used my first three picks on Christian McCaffrey , Leonard Fournette , and Aaron Jones . Of course it doesn’t hurt that all three of those backs performed well and that Jones crushed pick value, but the stability they brought was very important. I didn’t have to rely on guys like Chris Thompson , Justin Jackson , and Peyton Barber to have big weeks. I grabbed receivers like Hunter Renfrow and Deebo Samuel late in drafts in many of best ball leagues and they had plenty of weeks where they cracked my starting lineup. You can go way deeper in the draft and get wide receivers who can be big hits certain weeks in a best ball format, but you are unlikely to find backs deep in the draft that will ever really help you (barring injuries). So, while I believe going RB early in all drafts is important, I think it becomes even more crucial in best ball formats. It is something to keep in mind on a yearly basis.

Be sure to follow me on Twitter @JustinVreeland as I will post plenty of my drafts using RB heavy approaches and you can get an idea of some of the different routes you can go while using this strategy. You can also join some of the Fantasy Alarm Best Ball drafts that I am hosting, if you think you can take myself and others down!