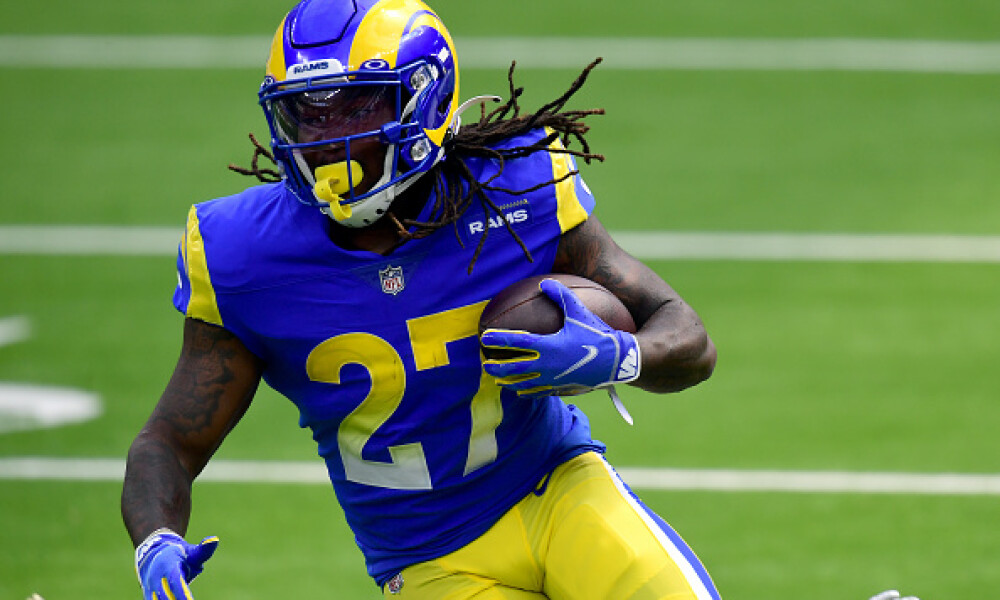 The Los Angeles Rams and Cincinnati Bengals meet in Super Bowl 56 this weekend! While all the focus in DFS and fantasy football this year has been on the two teams' passing attacks, the running backs should not be ignored in this matchup either – especially in DFS when building your DraftKings, FanDuel, and Yahoo lineups!

Despite missing nearly the entire regular season after suffering a torn Achilles this past offseason, Cam Akers took over the Rams' lead-back role entering the playoffs. The second-year back has shown some explosiveness at times, but overall his postseason numbers haven’t been great. He's averaging just 2.8 yards per carry with zero touchdowns and two lost fumbles. He's also added five receptions for 62 yards, though 40 of those 62 yards came on one play.

Akers took over the starting job for Sony Michel, who really had a strong regular season for the Rams once he was handed the reigns. Michel finished the year with 845 rushing yards and four touchdowns while averaging 4.1 yards per carry over the 17 games. Against the Cardinals, we saw Michel rush for 58 yards on 13 carries – but he had just one carry for four yards against the Buccaneers. Michel then got a bit more involved in the NFC Championship game against the 49ers, but struggled for just 16 yards on 10 carries.

The wild card this weekend is Darrell Henderson, who is expected to be active for the Super Bowl. Henderson was the Rams' lead running back this season until an injury sidelined him and opened the door for Michel to take over during the final weeks of the regular season. Henderson has the ability to run and catch the football and current reports are that the Rams intend to “ride the hot hand."

The Bengals defense ranked 13th in DVOA against the run this season but during the playoffs they have been shredded, allowing 5.9 yards per carry. Cincinnati also struggled against running back pass plays, allowing the fifth-most receptions to the position this season.

So, which running back should you look to roster this week? I think Sony Michel is going to be the odd man out here, which leaves us with Cam Akers and Darrell Henderson – and I'm leaning the direction of Henderson. Akers doesn’t seem ready to carry the full workload here and Henderson was a productive back this year when healthy. He also adds the pass-catching ability in a great matchup for running backs who can catch the football. The best part? He is essentially free, which opens up the money you need to spend up at the wide receiver position.

Unlike the Rams, the running back situation with the Bengals is pretty clear-cut. Joe Mixon is the starting running back and he is going to likely play over 75% of the offensive snaps. Through three playoff games, he has totaled 190 rushing yards and a touchdown while adding 13 catches for 106 receiving yards. Mixon had a strong AFC Championship game against the Chiefs – totaling 21 carries for 88 yards while adding three catches for 27 yards – but his 3.65 yards-per-carry playoff average leaves much to be desired.

Behind Mixon is change-of-pace back Samaje Perine. He's averaging about 22% of the offensive snaps through the three playoff games and mostly fills in on third downs for the Bengals. Through these three games, he has totaled four catches on six targets for 47 yards and a touchdown. Most of that production came against the Chiefs, where he had three receptions for 43 yards and a score. Perine is going to be the ultimate contrarian play in DFS this weekend and, if the Bengals are trailing often, he could be on the field a bit more than usual. However, you are counting on him to repeat his AFC Championship performance.

So, those are the Cincy backs – but how about the matchup? Well, the Rams run defense ranked fifth against the run per DVOA ratings. They have allowed just 3.1 yards per carry during the postseason and just 54 rushing yards per game.

Rostering a Bengals running back will be wildly contrarian, especially Joe Mixon – who is the fifth-highest priced player on the board at DraftKings.