Fantasy Baseball Daily Round Up: September 16 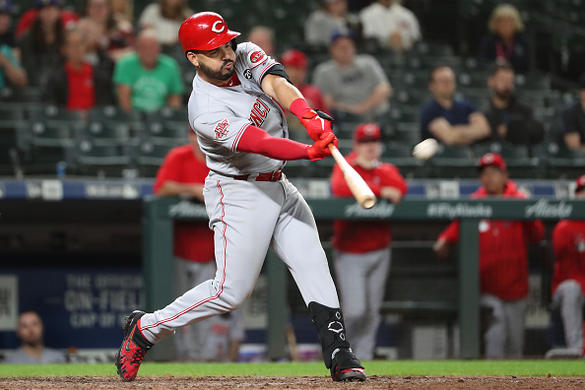 With Pete Alonso heading to Coors Field for a three game series, Eugenio Suárez pulled into a tie for the major league lead at 47 home runs. Suarez swatted two on Sunday while scoring all three runs in a Reds victory in Arizona:

Pacing the Red Sox offense, Christian Vázquez also recorded two home runs, including a grand slam on Sunday, driving in five runs. This marks his 36th multi-hit game of the season and he’s hit 21 home runs in 127 games. Prior to this year, Vazquez hit 10 home runs in 291 career contests.

Keeping with the theme of two home runs on Sunday, here’s the rest of the double dong games from the slate:

Other notable performances by hitters include:

In a microcosm of the Mets season, Zack Wheeler fired seven strong innings allowing six hits and one earned run with nine strikeouts. He left with the lead but did not get the win due to the bullpen. But, Wheeler remains 5-1 over his last 10 starts with a 2.94 ERA in them. He’s also yielded only one run in each of his last four outings. On Sunday, Wheeler generated 17 swinging strikes and 21 called for a 39.2 called plus swinging strikes (CSW) percentage. Here’s a glimpse of his arsenal:

Here’s the other notable starting pitcher performances from Sunday:

As alluded to above, an untimely misstep by Seth Lugo handed the lead to Los Angeles in the top of the ninth inning during a tied game Sunday night. Lugo entered in the midst of a 14 inning scoreless streak but a double by Enrique Hernandez and a single by Jedd Gyorko gave the Dodgers the lead. It’s also worth noting Kenley Jansen pitched the bottom of the eighth and garnered the win with Kenta Maeda working two-thirds of an inning in the ninth en route his second save.

Here’s the other high leverage events from Sunday:

First, the sound of sad trombones with news of Mike Trout missing the rest of the season due to surgery. This also opens the door for a new MVP in the American League.

With this in mind, Dakota Hudson will face Stephen Strasburg tonight while Cole Hamels starts for the Cubs and Zach Davies for Milwaukee.

In the American League, Oakland owns a one and a half game lead to host the play-in game with Tampa Bay in second and Cleveland trailing the Rays by one in the loss column.