Fantasy Baseball Daily Round Up: September 5 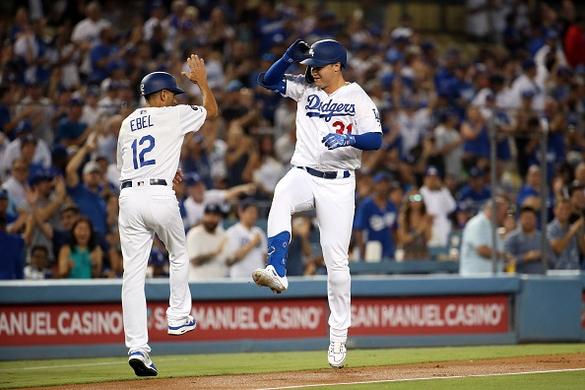 Pederson’s hit 32 home runs this year, all versus right-handed pitching in only 353 at-bats resulting in a robust home run every 11 at-bats against them. His second home run set the National League record for most home runs in a season by a team (250) and the Dodgers will play 24 more games.

Meanwhile, in the desert:

Ketel Marte and @escobarmaracay become the 1st pair of NL switch-hitting teammates to each hit 30 HR in a season. pic.twitter.com/6IHUQiRjFD

Not only did Ketel Marte break a tie with a grand slam in the seventh inning, he propelled Arizona to its third straight win and within three games of the Wild Card race.

Remembering baseball proves to be a marathon of a season, Mookie Betts continues to surge of late:

With 2 HR and 2 singles tonight, @mookiebetts now has the most four-hit, five-RBI games (5) in @RedSox history. pic.twitter.com/BimtyUG8MG

He’s reached base safely in 18 straight contests. His last 15 games yields 23 hits over his last 65 at-bats (.354) with eight doubles and five home runs.

More history with home runs set by reliever Michael Lorenzen who allowed a game tying home run but atoned for it matching something not done since Babe Ruth:

Michael Lorenzen is the first player to earn the win, hit a home run and play in the field in the same game since Babe Ruth on June 13, 1921! (via @StatsBySTATS) #BornToBaseball pic.twitter.com/2YDcKsngNH

Pete Alonso hit his major league leading 45th home run on Wednesday during a Mets win over the Nationals. Remember when he needed more seasoning at Triple-A without being promoted last year at this time? Robinson Canó returned from the injured list going 3-for-3 with two runs, his 11th home run and two RBI.

It’s been a lost year for the Marlins, but Starlin Castro remains red hot. He racked up four hits, all for extra-bases (three doubles, home run) scoring three runs and driving in two. Since June 28th, Castro’s hitting .329 (76-for-231) with 31 runs, 16 doubles, 12 home runs and 42 RBI. He’s also tallied multiple hits and an extra-base in 11 of his last 25 games.

Aaron Judge launched his 20th home run driving in two during a Yankees win. He’s homered in four of his last eight contests providing a late season power surge for his owners.

Franmil Reyes went 2-for-3 scoring three times along with hitting his 34th home run on Wednesday. During his last 21 games, Reyes owns a .319 average with five doubles, seven home runs, 19 RBI and 12 walks for Cleveland. In an eventual loss, Tim Anderson racked up three hits including his 15th home run. He’s batting .386 his last 20 games hitting safely in 18 of them with 10 doubles, three home runs and 10 RBI. José Abreu added his 29th home run, has a hit in 13 of his last 16 with five doubles, three dingers and 17 RBI.

Last, but not least, Jorge Soler continues to set records for the Royals:

He hit a 115.7 mph HR, the hardest-hit HR by a Royals player tracked by Statcast (since 2015). pic.twitter.com/SFKlSdOFMg

Carrying a no-hitter through 6.1 innings, Gallen recorded his third win giving up one hit and a walk with eight strikeouts in seven shutout innings. He generated 11 swinging strikes and 24 called for a 34 called plus swinging strike (CSW) percentage as well. There’s no guarantee Gallen will remain hot until the end of the season, but his presence keeps Arizona within striking distance of the playoffs.

It’s been a volatile stretch for Brad Hand as the Indians closer. He allowed runs in four straight outings in August but rebounded to record four straight games since prior to last night. Hand only retired one batter giving up four hits, including a two-run home run to Tim Anderson and walked one before leaving the game. Nick Wittgren entered to record the last two outs and his fourth save. In the second half, Hand owns an ERA of six with a WHIP of 1.83. Less than optimal and a cumulative effect of being overused in the first half.

In a split slate, Sonny Gray and Dakota Hudson highlight the day games starting for their respective teams.

José Quintana will try to stay hot in the second half facing the Brewers with Chase Anderson on the mound in the evolving playoff race in the National League Central. Plus, Atlanta rides a six game winning streak with Max Fried opposing Stephen Strasburg .