Fantasy Baseball Daily Round Up: August 26 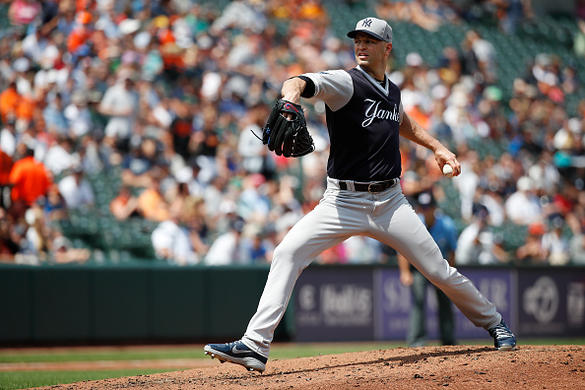 With the waiver trade deadline approaching on Friday, it’s the last chance to add veterans to the roster for the stretch run before the wave of promotions hit. Fantasy owners should be approaching their teams the same way, if a veteran’s not producing, adding the right replacement could make a difference in the standings, so vigilance during the last month of the season will be important. Especially with fantasy football drafts on the horizon, myself included.

Check the standings, address needs where points can be made up in specific categories as the final leg of the fantasy baseball marathon approaches its fruition. We can do this.

During a doubleheader sweep in Baltimore, J.A. Happ became the first Yankees pitcher since Bob Turley in 1955 to start and win each of his first five games with the team. How bad are things with the Orioles right now? They made Sonny Gray look like a viable starting pitcher in the night cap. Miguel Andujar racked up four hits in the two games including his 21st home run. Over his last 28 he’s hitting .315 with 19 runs, nine home runs and 29 RBI. 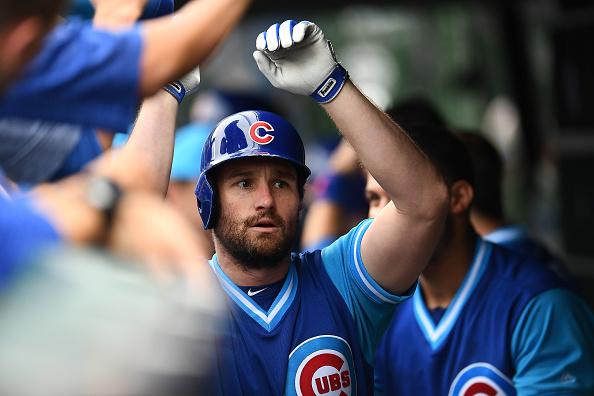 Newly acquired Daniel Murphy homered for the second consecutive game, is 8-for-19 since joining the Cubs with five RBI in four games. Javy Baez and Kyle Schwarber each hit their 23rd home run in a win over the Reds.

Deep league players should consider Phil Ervin this weekend. He’s recorded multiple hits in three of his last seven games, drove in six runs the last nine and Ervin’s hitting .344 in the second half with four home runs and 19 RBI.

Rougned Odor started the road trip in a slump, but he’s hit a home run in back-to-back game. He’s hitting .333 since the start of the second half and produced 15 home runs with 45 RBI over the last 62 games.

Nice outing by Andrew Suarez giving up three hits and three walks with five strikeouts in seven shutout innings. More impressive? The 14 ground balls generated compared to one fly ball put into play. Keep tabs on this bullpen. Will Smith struggled for the second straight outing allowing a hit and two walks with two strikeouts before being lifted for Mark Melancon who notched his first save since June 21st.

An innings limit could cut Zack Wheeler ’s season short soon, but he’s surging in August. Wheeler won his ninth decision yielding six hits and three walks with four strikeouts in seven shutout innings against the Nationals. During 33 innings this month, Wheeler’s surged to a 1.09 ERA in 33 innings with 34 strikeouts against eight walks.

Although the Blue Jays continue to stifle Vladimir Guerrero Jr. in the minors, recent call-up Billy McKinney ’s producing. McKinney hit his third home run in the last four games driving in two yesterday. He’s the first player in team history with at least three home runs and nine RBI in his first seven games. Kendrys Morales homered for the sixth straight game, with seven total in the streak and owns a nine-game hit streak during which he’s raised his average 25 points. Ken Giles saved his 18th game of the season and sixth in as many games.

Another under the radar flier resides in Philadelphia. Roman Quinn recorded his fourth straight multi-hit game going 2-for-4 with two runs and two RBI. He’s hit safely in eight of his last nine contests with six runs, a home run and three stolen bases.

Another productive day for Joey Wendle . He tallied two more hits with an RBI, a walk and his ninth stolen base. Since the start of July, Wendle’s hitting .338 with 11 doubles, two triples, five home runs and 25 RBI.

With his velocities rising, Wei-Yin Chen recorded 10 strikeouts in six shutout innings at home versus Atlanta. Chen generated 15 swinging strikes of his 109 pitches with another 22 called. Chen lowered his home ERA to 1.86 in 11 starts so far. 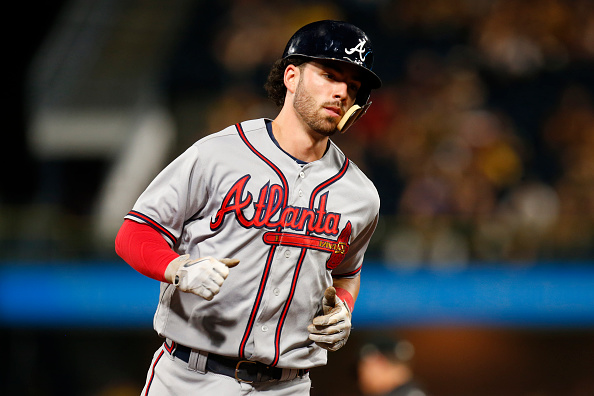 Accounting for the Braves only run, Dansby Swanson hit his 13th home run of the year. After a nadir of production, Swanson’s 14-for--his-last-45 with nine runs, two doubles, five home runs and 13 RBI his last 13 games.

Jameson Taillon stands as a reason owners need to be patient. He yielded one earned run in Milwaukee on five hits with eight strikeouts. Over his last eight starts, Taillon’s recorded a 2.42 ERA going 5-2 with 46 strikeouts in them. Remember this next year.

Flourishing in Miller Park, Christian Yelich homered for the third straight game, rides an 11-game hit streak during which he’s 15-for-51 with five home runs and seven RBI.

Could Lucas Duda be healthy? He racked up three hits including his 12th home run with an RBI against the Indians and has five home runs with 19 RBI in 25 contests in the second half. Adalberto Mondesí finished 2-for-4 with two runs and his 17th stolen base. He’s stolen 12 in only 25 games since the break.

No one seemed excited when the A’s acquired Mike Fiers , but he moved to 3-0 since joining the team defeating the Twins on Saturday. Fiers has 28 strikeouts versus three walks in 24.1 innings with Oakland with a 1.50 ERA.

Speaking of below the radar, the Rockies starters stayed hot with German Marquez striking out nine over seven innings limiting the Cardinals to three hits and one walk in the process. Marquez owns a 2.57 ERA his last 10 starts with a 76:14 K:BB in 66.2 innings.

Edwin Díaz became the 17th reliever to reach 50 saves, and it’s still August. Scott Servais will honor his bet getting the same haircut as Diaz as a result. Diaz also becomes the second reliever with at least 50 saves and 100 strikeouts. Last, this save marks his 25th one-run save of the season.

Stay hot Marwin González . He went 2-for-4 with two runs, a double, home run (14) and two RBI. Gonzalez has hit safely in six straight, recorded eight multiple hits games this month with 17 runs, five doubles, eight home runs, 18 RBI and a .333/.395/.705 slash line in it. Keep tabs on José Altuve , he was hit by a pitch late in this game and should be sitting out on Sunday.

Some focus on Shohei Ohtani returning to the mound possibly in September, but his bat’s hot as well. Ohtani launched his 14th home run driving in two and he’s 16-for-47 (.340) over his last 18 games with five home runs, 15 RBI and four stolen bases.

For the third straight appearance, Kenley Jansen served up a home run. This one resulted in his fourth blown save and the team will give him a break until Tuesday. Justin Turner went 2-for-5 with a run and an RBI. In August, Turner’s hitting .392/.478/.709 with 18 runs, eight doubles, five home runs and 14 RBI. Both Max Muncy and Manny Machado hit their 30th home run in this game. 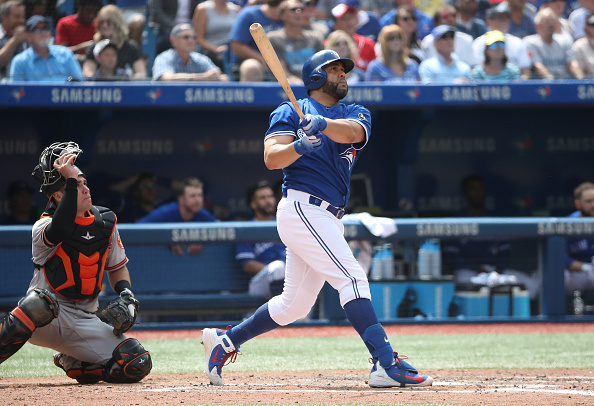 Can Kendrys Morales extend his home run streak to seven games? He’s 2-for-6 against Vince Velásquez in past match-ups with a home run.

Blake Snell takes the mound at home and hopes to continue Boston’s struggles against southpaws.

Fantasy owners hope to see what Michael Kopech can accomplish in an outing not cut short by rain when he faces the Tigers on the road this afternoon.

Pittsburgh will place Chris Archer on the bump in Miller Park. He did not miss a start due to his leg injury, but he’s on watch in this one.

Who closes for the Dodgers today? Look for Kenta Maeda to get the save chance if provided.

Check back on Monday for more fantasy baseball coverage in the Round Up on Fantasy Alarm. Also, stay ahead of the competition with the football coverage later this afternoon.

L. Gohara - RP
LAA
Angels released LHP Luiz Gohara.
Gohara was a highly-ranked prospect not all that long ago, but he ran into shoulder issues in the spring of 2019 and ultimately got released by the Braves before the end of the season. He went on to sign a minor league contract with the Angels, and it's all but official that there will be no minor league baseball games in 2020. The 23-year-old left-hander might not get another shot until 2021.
Added 8:16 pm (EST)
Added 8:16 pm (EST)

O. Hernandez - C
STL
Cardinals released C Oscar Hernandez.
Hernandez was in Cardinals camp this spring on a non-guaranteed minor league contract and went 0-for-6 with one strikeout during Grapefruit League play. The 26-year-old likely would have been ticketed for Triple-A Memphis, but it appears that there will be no form of a Triple-A season in 2020.
Added 8:06 pm (EST)
Added 8:06 pm (EST)

E. Jackson - SP
ARI
Diamondbacks released RHP Edwin Jackson.
Jackson is one of 37 players -- all on minor league contracts -- to be released by the D-backs this week. The veteran right-hander signed a minor league deal with Arizona in early February after posting an ugly 9.58 ERA in 18 major league appearances last season for the Blue Jays and Tigers.
Added 3:56 pm (EST)
Added 3:56 pm (EST)

E. Jenkins - LF
TEX
Rangers released OF Eric Jenkins.
Jenkins was the 45th overall selection in the 2015 MLB Draft out of a high school in North Carolina. The 23-year-old outfielder finishes his run with the Rangers organization as a .221/.288/.316 career hitter in 1,778 minor league plate appearances, all below the Double-A level.
Added 3:39 pm (EST)
Added 3:39 pm (EST)