Greg Jewett talks about George Springer sitting, does some comparisons between players on the trade block and much more on Friday's Closing Bell. 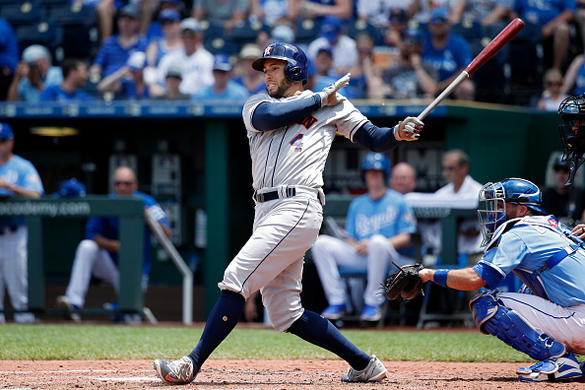 Friday night’s lineup for the Astros in Tampa Bay does not include George Springer . Those who do not own him may not realize Springer’s in the throes of a 4-for-54 slump dropping his batting average from .287 to .256 as a result. Most recall his heroics in the World Series along with the power surge he displayed last season breaking out for 34 home runs in only 140 games.

Over the last 30 days, Springer’s slashing .188/.311/.347 with 17 runs, four home runs, eight RBI and two stolen bases in 26 games (101 at-bats). Although he’s still displayed solid plate discipline with 17 walks against 21 strikeouts, his weighted runs created plus sits below league average (90) with his weighted on-base average at .296 with only a 32.9 hard hit percentage. For perspective, José Altuve ’s hard hit rate the last 30 days is 40.5 percent.

Sometimes a player needs to take a step back and clear his head to bounce back. Springer’s peripheral statistics suggest a rebound could be near, and July provides hope to start anew. It’s unfortunate timing for Springer since he’s three-for-three in past matchups with tonight’s starter, Wilmer Font . Here’s hoping Springer gets a bloop and a bomb on Saturday to kickstart his positive migration to the mean. 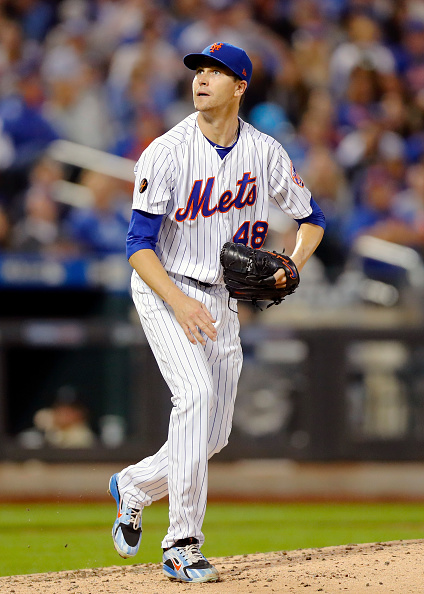 Tons of news regarding the Mets and its pitching staff. Jacob deGrom will not start on Friday night for personal reasons but will take the mound on Saturday. Corey Oswalt will fill in tonight against the Marlins and presumably stay in the rotation until Noah Syndergaard . Why? Because Seth Lugo ’s returning to the barren bullpen to help eat up innings and give Robert Gsellman a break. Jason Vargas will also rejoin the rotation when ready which prompted Lugo to shift back to reliever. Lugo’s pitched well out of the bullpen with a 2.27 ERA and 0.95 WHIP, 36:9 K:BB while limiting hitters to a .195/.259/.307 slash line against in 35.2 innings.

American League only players or teams in deep two-catcher formats will be interested to find out the Twins promoted Willians Astudillo. Through 49 games at Triple-A, Astudillo’s hit seven home runs with 25 RBI, six stolen bases while hitting .290/.321/.489 and striking out only nine times in 176 at-bats. In fact, during his 316 plate appearances in Triple-A with two different teams, Astudillo’s only whiffed 14 times while transitioning to hitting more fly balls (42.1 percent in 2017, 44.4 percent this year) with 11 home runs at the level and a .858 on-base plus slugging percentage.

In case you missed it, Steve Pearce was traded to Red Sox and will hit fourth in his debut at Yankee Stadium. Pearce’s .306/.358/.531 line versus southpaws this year prompted the move along with his ability to play corner outfield spots or first base to add flexibility to the Boston roster. He could be a sneaky pickup in deeper formats. In an effort to add to their bench for the pennant chase, the Yankees promoted Brandon Drury but he’s not in the lineup on Friday night.

Kansas City will get Jorge Bonifacio back from his suspension. He hit 17 home runs with 40 RBI last year in 140 games. Bonifacio’s played in 13 games at Triple-A with 11 runs, five doubles, one triple, nine RBI and a .392/.466/.529 slash line. Speaking of suspensions, Jorge Polanco could return to the Twins as soon as Monday.

Good news for Chris Archer owners. He will make a rehab start in five days slated to throw four innings in an effort to return to the depleted Rays rotation. Atlanta gets Ronald Acuna Jr. back tonight in St. Louis, he will hit sixth. Not quite heart of the order, but he’s back. Stephen Strasburg completed a bullpen session and could start a rehab stint soon as well. Last, but not least, A.J. Pollock will initiate his rehab outings this weekend.

Bad news if hoping for the Chad Kuhl breakout. He’s heading to the disabled list with a right forearm strain. Stash Nick Kingham now if you need help in the rotation in deep leagues. Darren O’Day could require surgery on his hamstring and has landed on the 60-day disabled list. Christian Yelich will sit out again on Friday night with a balky back. Stay tuned.

In an effort to identify a couple of relievers to stash this weekend on waivers, here’s a couple of blind profiles from the last 30 days as food for thought. 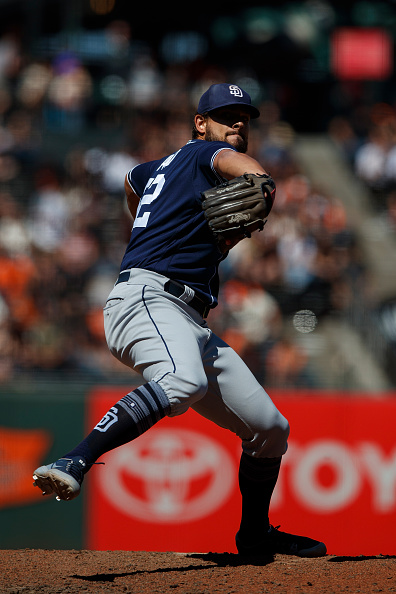 Player A closes for the Padres and is one of the most wanted relievers on the trade market. Whether or not San Diego moves him, Brad Hand ’s been a top reliever since last year. His clone in this scenario pitches for the White Sox and is also a southpaw. He started strong and then struggled but has adjusted back well of late. With Joakim Soria in trade talks, keep tabs on Jace Fry for saves in the second half.

Before giving away the names, which reliever in this scenario would you prefer? One was the top closer taken in drafts this year who started slowly but has rebounded with 19 straight saves but is Player B above, Kenley Jansen . With Sam Dyson struggling in San Francisco and the manager seeming to prefer right-handed pitchers, Player A’s Reyes Moronta . If he’s not on your radar while chasing saves, it’s time to recalibrate.

Would the Yankees and Mets ever make a blockbuster trade? Although it makes sense on paper given the depth and quality of the Yankees farm system along with a clear need at pitcher, not sure the Mets would ever do this.

Who closes on the Blue Jays on August fifth? According to general manager Ross Atkins, it’s Roberto Osuna if you can stash him for another month.

Will Eric Thames continue to own the Reds? Same for Jesus Aguilar .

Does Yu Darvish make another start for the Cubs this year?

Does Odubel Herrera want to become a two-sport athlete? Just kidding here but he did homer at Yankee Stadium during batting practice. Also hear he looks good in Pinstripes. I will confirm with Howard Bender.

Be sure to check back in the morning for Fantasy Alarm’s Round Up for highlights of Friday night’s slate along with its fantasy implications.

B. Buxton - CF
MIN
Byron Buxton (family) has arrived in Minneapolis and is being processed through MLB's intake testing protocol.
Buxton was excused from the first weekend of summer camp following the arrival of his second child on Friday. His coronavirus test results should be ready around the middle of the week, and if he's in the clear, he'll be given the go-ahead to join the workouts happening at Target Field. The 26-year-old played well last season when healthy and could be a highly valuable multi-category producer in MLB's planned 60-game sprint.
Added 10:01 pm (EST)
Added 10:01 pm (EST)

J. Guerra - RP
ARI
Junior Guerra has tested positive for COVID-19, Diamondbacks manager Torey Lovullo announced Sunday.
Silvino Bracho also tested positive. Guerra was signed to a one-year, $2.55 million free agent contract in December and could be a valuable bullpen piece for Arizona in this condensed campaign given his ability to work multiple innings in relief. He had a 3.55 ERA, 1.12 WHIP, and 77/36 K/BB ratio in 83 2/3 innings (72 appearances) last season with the Brewers. The 35-year-old right-hander will be put in quarantine and must pass two consecutive COVID-19 tests before he is allowed to return to the D-backs.
Added 9:49 pm (EST)
Added 9:49 pm (EST)

A. Heaney - SP
LAA
Angels manager Joe Maddon confirmed Sunday that Andrew Heaney is locked in as the team's Opening Day starter.
It will be the first career Opening Day start for Heaney, who struck out 118 batters over 95 1/3 innings last season and spent the shutdown period working further and further away from the elbow and shoulder issues that have recently plagued him. He's a worthy mid-to-late round pick in fantasy drafts this summer.
Added 9:23 pm (EST)
Added 9:23 pm (EST)

K. Yates - RP
SD
Kirby Yates is expected to do his intake testing on Monday and Tuesday.
And if he's clear of COVID-19, he could participate in his first summer camp workout on Wednesday. Yates was late arriving to camp due to a positive diagnosis within his family. The 33-year-old right-hander should be among the first relievers off the board in summertime fantasy drafts after posting a 1.19 ERA and 101/13 K/BB ratio over 60 2/3 innings least season while leading all MLB closers in saves with 41.
Added 9:19 pm (EST)
Added 9:19 pm (EST)

S. Bracho - RP
ARI
Diamondbacks manager Torey Lovullo announced Sunday that Silvino Bracho and Junior Guerra have tested positive for COVID-19.
It's unclear whether the cases were diagnosed through MLB's intake testing protocol or before. Either way, the two pitchers will be absent from summer camp workouts until they pass consecutive COVID-19 tests. Bracho suffered a recent setback in his recovery from Tommy John surgery, so it's unclear how much he is able to do at the moment anyway. Guerra signed a one-year, $2.55 million deal with Arizona in December.
Added 9:11 pm (EST)
Added 9:11 pm (EST)

F. Perez - SP
DET
Tigers RHP prospect Franklin Perez (shoulder) threw a bullpen session this weekend at Tigers summer camp.
Perez resumed working from a mound in February after taking several months off to a heal a shoulder issue, and it looks like he should be able to pitch in instraquad games at some point this summer. The 22-year-old was included in the Tigers' initial player pool, but it's unclear whether he'll see any actual MLB action.
Added 8:53 pm (EST)
Added 8:53 pm (EST)

F. Mejía - C
SD
AJ Cassavell of MLB.com writes that Francisco Mejia has "looked sharp" in the Padres' first two instraquad games.
Mejia went 0-for-15 in the Cactus League this spring, but it's always been silly to draw any conclusions from spring training numbers. The 24-year-old former top prospect would seem to be a good option for the Padres at DH and should get a boost in fantasy value with the addition of that role to the National League scene. He's a sneaky post-hype breakout candidate heading into MLB's planned 60-game 2020 campaign.
Added 8:28 pm (EST)
Added 8:28 pm (EST)

K. Lewis - LF
SEA
Mariners manager Scott Servais praised Kyle Lewis' physical condition during a Zoom call with reporters on Sunday.
Lewis finally put his knee issues in the rearview last season and in September delivered an .885 OPS with five home runs over his first 18 major league games. He used the shutdown to work with private hitting, speed, and strength coaches. “Coming back from a very serious knee injury, it takes time,” Servais said. “You might be physically strong and everything checks out, but it’s always in the back of your head. That’s what it looks like to me, that it’s kind of freed him up now. ... The ceiling, the upside for Kyle, the sky is the limit."
Added 8:10 pm (EST)
Added 8:10 pm (EST)