All About the Home Run 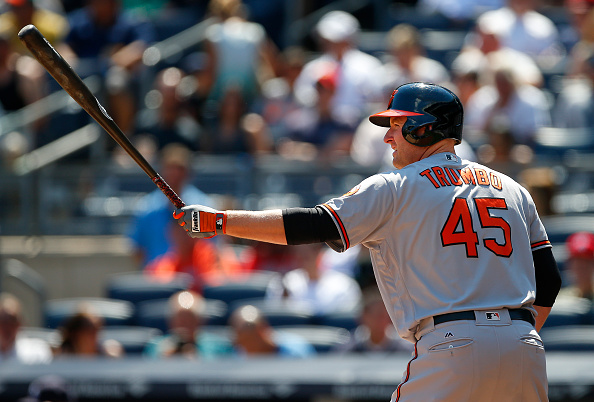 Chicks dig the long ball. We all know it. It’s totally true. Nicknamed Kong as a kid (yes, I hit a fair number of homers), I can tell you first hand that the ladies want to be near you if you consistently hit the ball into the seats. Major league players must have gotten the memo. Even though we’re all talking about how impressive pitching is across the board, in the world of fantasy baseball, we need to also give a nod to the fact that the home run is back in a big way.

Here are the league homer totals the last 10 years. 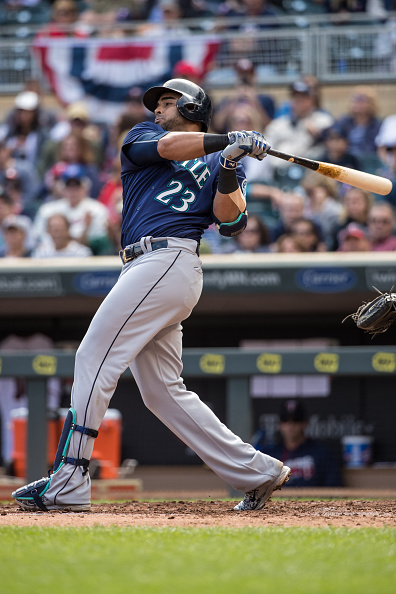 Let’s look at the number of players, the last three years, to reach home run milestones.

There are more players, hitting more homers, than there were a few years ago. That means, as we are all aware, that homers can be found later in drafts, especially with limited players like Chris Carter, Michael Saunders and Danny Espinosa out there. Steals might be hard to find, but you can find homers late. #Fact

Here is a review of ESPN’s Home Run Tracker data.

Here is the list of men with “No Doubt” home runs in 2016 (cleared the fence by 20 feet vertically and landed 50 feet past the fence). It doesn’t matter where these balls were hit, they were going out.

Encarnacion should blast tons of homers in Cleveland. Folks may not know it but the park in Cleveland actually had a higher Park Factor home run mark last year than Toronto (1.168 to 1.010).

The first name that surprises me on this list is Schoop. We will see his name below in the homer distance category.

Moreland rounds out the list. Now a Red Sox, goes to Fenway which is a bottom-five park for lefty home runs.

Here is the list of players that had the most “Just Enough” homers (cleared the fence by less than 10 feet vertically or landed no more than one fence height beyond the actual fence).

You will see Betts name below as well. After two years with a homer to fly ball ratio under 8.5 the mark jumped to 13.2 percent last season. That likely has a good deal to do with his total of 15 homers that were “Just Enough,” second most in baseball.

Asdrubal had 23 homers, his first season over 16 in five years. You can see how he was fortunate with the 14.0 HR/FB ratio last season, this after four consecutive years in single digits.

Finally, here is the list of “Golden Sledgehammer” leaders. These are the players who averaged the longest distance on their average home run (minimum 18 homers).

CarGo blasts bombs. Period. Not very surmising that two Rockies are in the top-3, though seeing the name of Story there is surprising.

Maybe the move to Fenway won’t crush the homer total of Moreland considering how far he hits em.

Mazara is the leading distance slugger for a guy with just 20 homers. He put a charge into it when he hit them.

Ramos was an elite power hitter for a catcher. He needs his lower half to be right to give that effectiveness a run in 2017.

Sanchez had a 408-foot average, a big-time number. At the same time, his 40.0 percent HR/FB ratio is obnoxiously high. Serious regression is coming, distance of homers be damned.

Yelich wasn’t looked at as a power hitter before last season. He has a chance to reach 25 homers for the first time in 2017.

Here are some “‘power hitters” who failed to average 400 feet per homer. All could be at risk of some homer pull back in 2017.

You didn’t think that hurlers would escape scrutiny did you? Here are the men who allowed the highest average distance, in feet, on the big fly. When these men made mistakes and they were crushed. 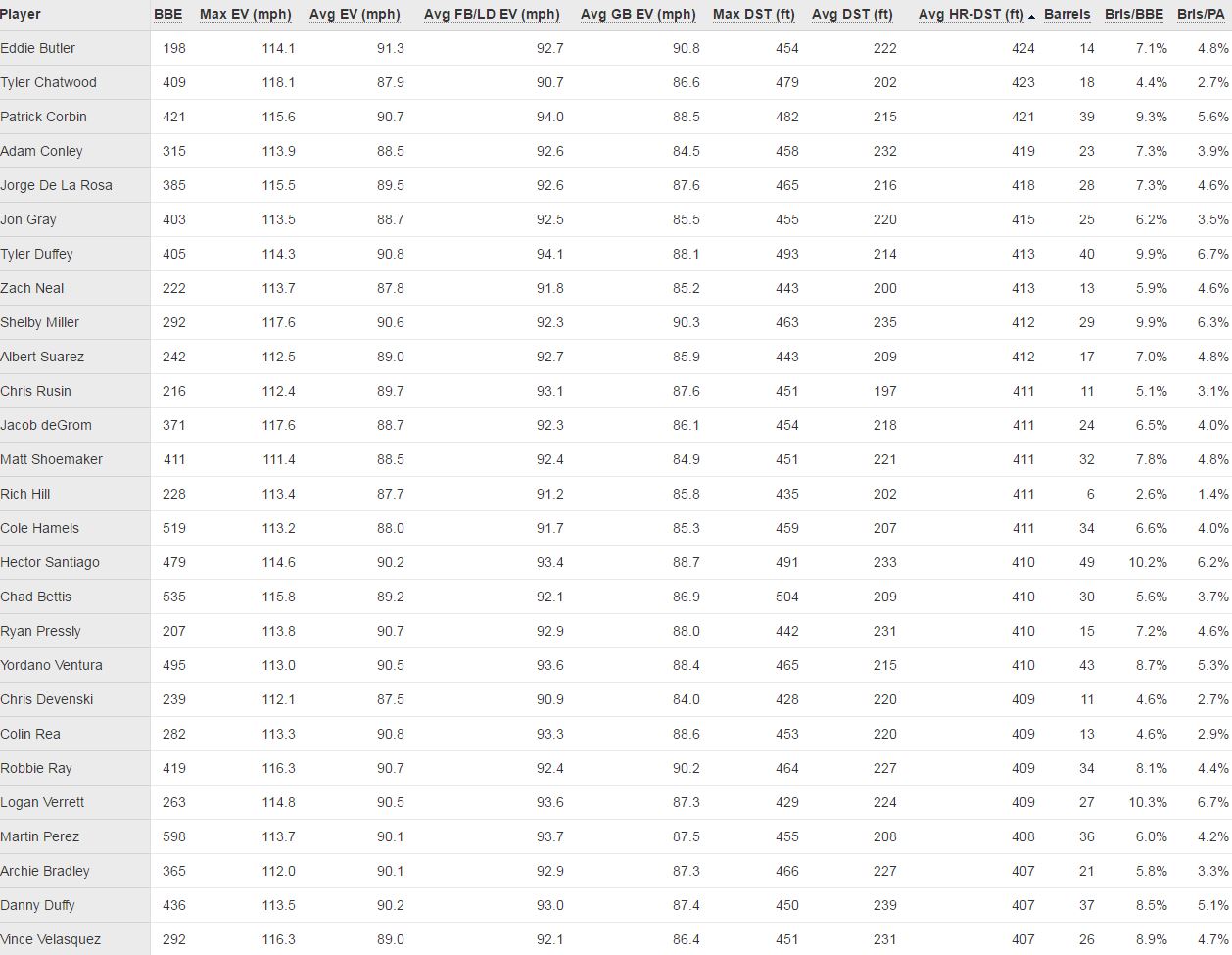 Eddie Butler faced the pain of what can happen when you pitch in Coors Field half the time. Ditto Tyler Chatwood. Ground ball arms, that get the ball up, get pounded. When that happens in Colorado the results are catastrophic. Jorge De La Rosa and Jon Gray... ditto. That’s right, the Rockies had four of the six worst performers in 2016.

Arizona ain’t a great place to pitch either and Patrick Corbin felt that pain last season in a major way. Teammates Shelby Miler, Robbie Ray and Archie Bradley all paid the price as well when they elevated the pitch.

Adam Conley has great stuff but location wasn’t exactly his strong suit last year. Leave a pitch in the hitting zone and it doesn’t matter how hard it’s coming in there.

Jacob deGrom... have to admit to being a bit surprised to see that number be so high at 411 feet, the same as Cole Hamels and Rich Hill. deGrom did see his HR/9 mark climb from 0.75 to 0.91 as his HR/F ratio went up two points to 11.5 percent. The number should come down a bit in 2017 as long as his arm is healthy as his fly ball ratio was only 31.7 percent last season, 1.1 points below his career level.

Finally, two arms everyone loves that I don’t believe in – Danny Duffy and Vince Velasquez – round out the list.

Here are the men who were hardest to take really, really deep on the big fly. 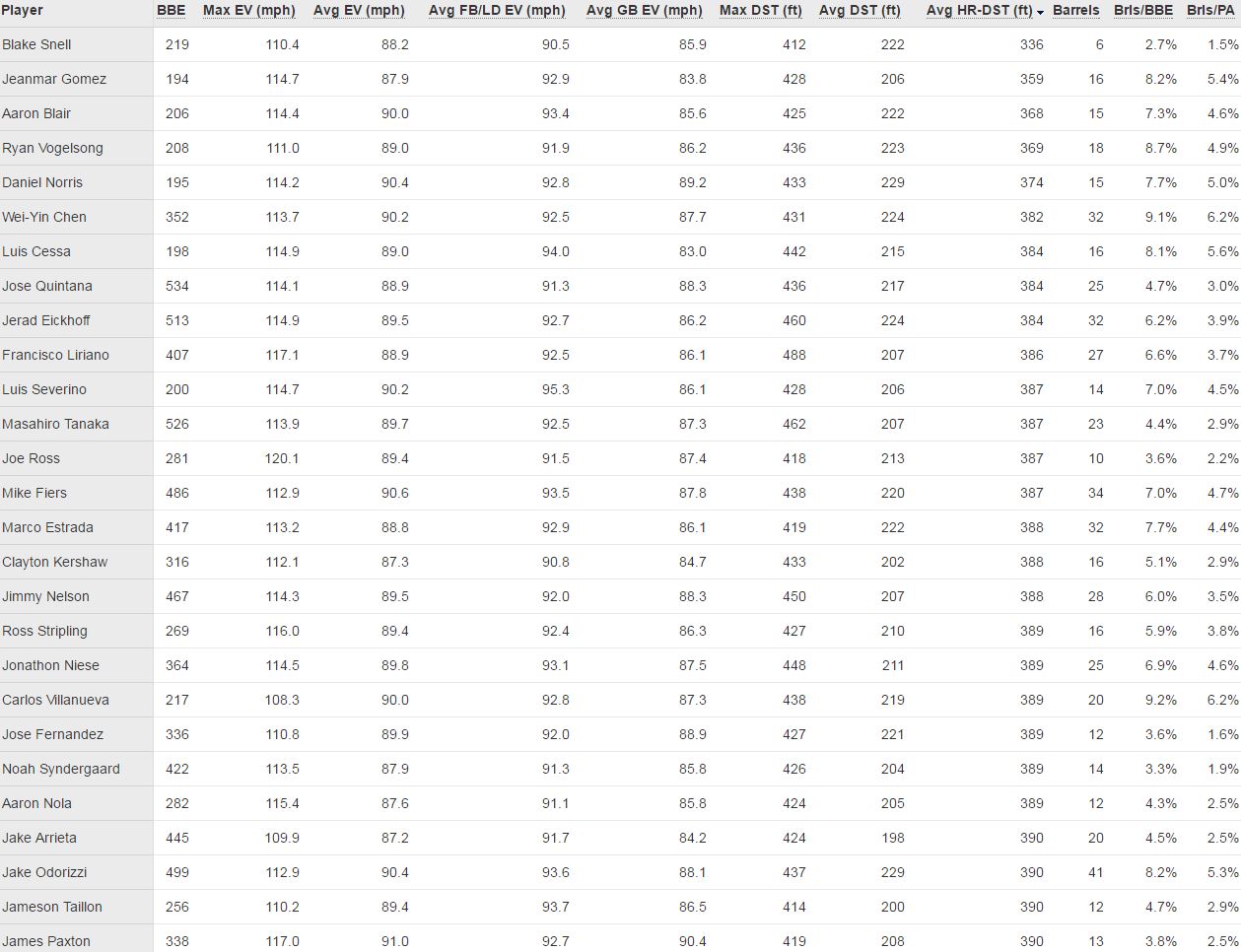 Blake Snell gave up a mere five homers in 19 starts. Batters simply didn’t drive the ball deep effectively off him even with the massive 27.3 percent line drive rate they posted.

Wei-Yin Chen is a soft-tosser who should be better in 2017 if he’s healthy.

I still really like the arm of Luis Severino. Ditto Joe Ross. Both men checked in at 387 feet.

I still can’t get behind Marco Estrada. Can’t shake the feeling that an implosion is coming.

Some big names toward the bottom of the list – Noah Syndergaard, Jake Arrieta and Jameson Taillon.