Colby Conway takes a look at a few third baseman who are going too early in drafts based on their current ADPs.

The third base position is rather deep this year, and there’s a lot of enticing options, headlined by Nolan Arenado   and Alex Bregman . The guys that come after these two are enticing as well, notably Cleveland’s José Ramírez , Toronto’s Vladimir Guerrero Jr., and San Diego’s Manny Machado . Each week, we will take a dive into this position in particular and figure out what to do with the position, whether it’s examining producers at different categories, overvalued players, undervalued players, etc.

For this second piece, let’s dive into the three most overvalued players at the position, based on NFBC average draft position (ADP) data available at time of writing. While these guys are incredibly talented and have put up strong numbers in the past, their current draft price is a bit too rich for my blood, based on options available later.

It’s not that he’s a bad player by any means. He’s probably one of the more talented guys in the game, but I think we’ve seen what he is. He isn’t cheap in drafts, and while he’s a safer play than other guys around him, I don’t imagine his ceiling being as high as some of the other guys around him. Bryant came with big time power pedigree, but at this point, it seems like 35 homers would be an excellent power season for Bryant. He responded nicely last year after injuries in 2018, hitting .282 with 31 home runs, 77 RBI and a whopping 108 runs scored. This year, Bryant is expected to hit atop the Chicago order, which gives him more at-bats and run scoring opportunities, but the ability to rack up RBI in bunches is going to take a hit.

He hit 31 bombs last year, but took a slightly inflated 18.0 HR/FB rate to get there. His career mark is 16.4 percent, and he likely comes back to 16ish percent this season. Sure, more at-bats could offset that, but it’s worth nothing nonetheless. The problem for me with Bryant this season isn’t the talent, it’s more so the price and the options that come later. If you think your team needs a boost in runs scored, or just a safe play after some risky “boom-or-bust” guys early, Bryant is a more than adequate play. However, if you want power upside or chasing runs batted in, why not wait and grab Mike Moustakas , Josh Donaldson or Matt Chapman ? 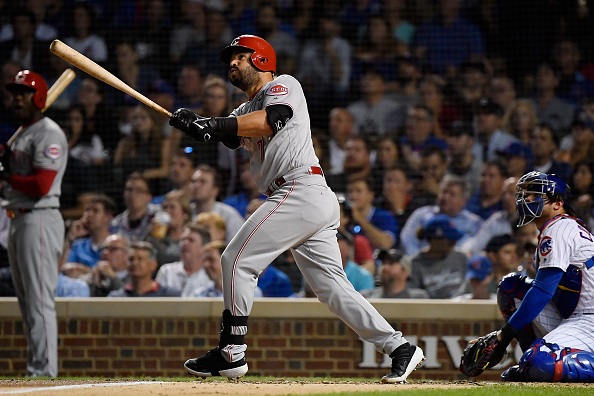 Statistical regression was on the table from the start, but the offseason shoulder injury certainly hasn’t helped anything. The Reds want him ready for Opening Day, or at least believe he could be, but I’m hard-pressed to believe he’ll be ready to go, 100 percent with no limitations. He’s going to have some lingering issues that likely sap some early season production.

Don’t get me wrong, Suarez is a pure hitter, but he had an insane jump in barrel rate last year! There is going to be some regression there, and his average exit velocity returned closer to his career mark after peaking at 91.2 miles per hour in 2018, per Baseball Savant. He never surpassed a HR/FB rate of 18 percent until 2018, when he jumped to 23.4 percent, but then he jumped again to a whopping 29.5 percent last year! That’s coming down a bit, even with a great home park! Suarez is one of the handful of players capable of hitting 40+ homers at the position, but I think we can all agree he’s not touching the 49 he hit last year, especially with the shoulder issue and if the balls are less juiced or jumpy.

I still like Suarez for 2020, but his average draft position needs to slip a bit. Paying full price, and then some, for a guy who was already battling statistical regression and now a shoulder issue seems like a risky proposition. If he slips in your draft, sure, take a chance, because the upside is there, just know if things go awry, you did it to yourself.

Let me start by saying this. I love Anthony Rendon . He’s been one of my favorite players and preferred targets at the third base position. However, we have finally reached the point where he priced himself out of many of my fantasy teams in 2020. He signed a monster deal with the Angels this offseason, and he and Mike Trout will look to dominate the American League. The two form a strong 1-2 punch, arguably one of the strongest in the game, but Rendon’s ADP has him going in the middle of the second round, and with a plethora of options at the third base position, it’s hard to make the pick to Rendon for me.

He’s a massive upgrade in batting average compared to other guys at the position, but the power is matchable, as are some of the other stats, and Rendon doesn’t run anymore. Also, the second round is one of my favorites this year, as a lot of “my guys” are going off the board in that range, and knowing how deep third base is, I find myself going elsewhere, compared to Rendon.

Nothing from 2019 raises any flags for 2020, as most of the numbers are repeatable or on par with his career marks. His hard contact jumped to 44.7 percent last year, which is exceptional, and his 88.3 percent contact rate made it three straight years with a contact rate above 87 percent. He stays in the zone and hardly whiffs, which helps keep that average afloat.

Again, here’s my gripe with drafting Rendon this year. See the table below:

Player A is Rendon.
Player B is Josh Donaldson .
Player C is Manny Machado .
Player D is Yoán Moncada .

Is Steamer a bit conservative with Rendon? I believe so, yes, but still, I’ll take the multi-round discount and target guys like Machado or Donaldson instead. 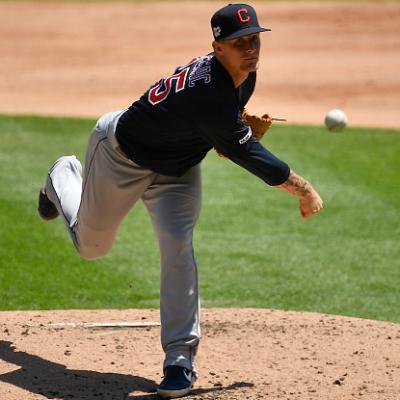 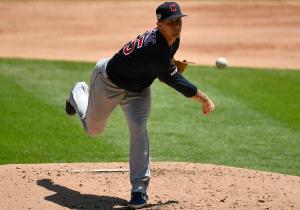 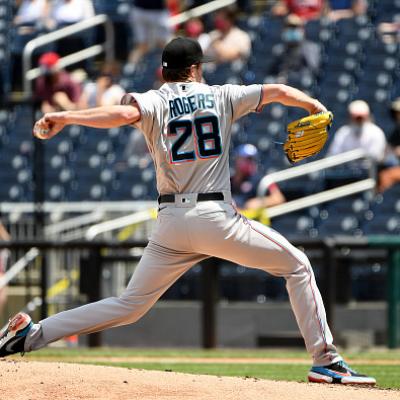 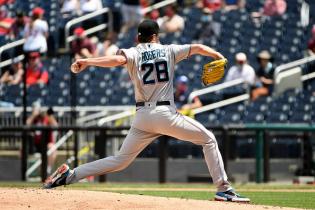 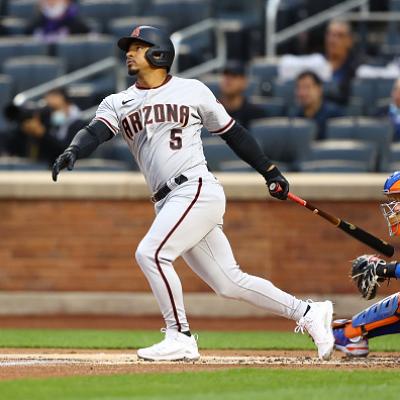 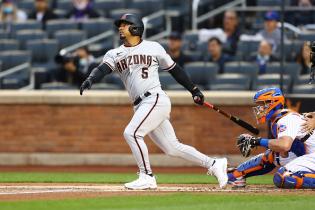 MLB Brandon Belt out of lineup with side tightness

MLB Hicks out of lineup against Rays with sore wrist

S. Turnbull - SP
DET1
Spencer Turnbull held the Royals to one run in 6 1/3 innings and struck out seven in a victory Thursday.
Both of Turnbull's quality starts this year have come against the Royals, though the other on April 26 didn't result in a victory. Turnbull's seven strikeouts were a season high. All six hits he allowed were singles. He's 2-2 with a 3.91 ERA as he prepares to take on the Mariners next time out.
Added 6:14 pm (EST)
Added 6:14 pm (EST)

G. Soto - RP
DET
Pitching for the third straight day, Gregory Soto was charged with two runs in the ninth Thursday against the Royals.
A.J. Hinch is treating his bullpen like he's in a pennant race in September, when he's actually managing a 100-loss team in May. He had Soto working for a third straight day today for no good reason. Last week, he also used him on back-to-back days even after he threw 30 pitches in the first of those games. In fact, seven of Soto's 18 appearances have come on zero days' rest, even though Soto is far from an efficient reliever. Hinch also had Michael Fulmer work in relief the day after a start last week. The Tigers pen is bad enough as is, but it could get really ugly if Soto and Fulmer end up flaming out before the All-Star break.
Added 6:05 pm (EST)
Added 6:05 pm (EST)

J. Kelenic - LF
SEA1
Jarred Kelenic is hitting leadoff and playing left field on Thursday against the Indians.
Amazing that Kelenic went from being not ready to ready to hit at the top of the lineup in his MLB debut. The 21-year-old impressed in his six games in Triple-A -- including a two-homer game in his debut with the Rainiers -- and has the ability to contribute in all five categories. Kelenic wouldn't be the first young player to struggle in his first taste of MLB pitching, but the talent suggests that he can be an immediate success.
Added 6:03 pm (EST)
Added 6:03 pm (EST)

M. Fulmer - SP
DET
Michael Fulmer got two outs for his second save Thursday against the Royals.
The Tigers wanted to use a tired Gregory Soto to close a 4-1 game, but he allowed three of the four batters he faced to reach. Fulmer took over then and got a popup and a strikeout to end the game. Fulmer should remain behind Soto in line for saves for now, but he is rather interesting as a short reliever in a way he just wasn't going to be as a starter.
Added 6:03 pm (EST)
Added 6:03 pm (EST)

D. Lynch - SP
KC
Daniel Lynch was lifted after giving up four runs -- three earned -- in 2 2/3 innings Thursday against the Royals.
At least Lynch made it out of the first inning this time, something that didn't happen last week against the White Sox. Still, he gave up seven hits to the 15 Tigers he faced and pretty much all of them were quite well hit. With a 15.75 ERA after three turns, Lynch looks like he needs some additional time in the minors. While his long-term future remains bright, he's more likely to help the Royals as a reliever than as a starter this year.
Added 5:59 pm (EST)
Added 5:59 pm (EST)

M. Lorenzen - SP
CIN
Michael Lorenzen (shoulder) has been cleared to start a throwing program.
Lorenzen will head to Arizona to begin the program. The right-hander has been on the injured list for the entire 2021 season while recovering from a right shoulder strain, but a recent MRI revealed that things are on the mend. He should help the Reds' pitching staff at some point this summer.
Added 5:58 pm (EST)
Added 5:58 pm (EST)

K. Bubic - RP
KC
Kris Bubic pitched five scoreless innings out of the pen Thursday against the Tigers.
Bubic pitched 5 2/3 scoreless innings in relief of Daniel Lynch five days ago. Today, he was needed for five more innings after Lynch was yanked in the third. The Royals probably should give him Lynch's rotation spot now. He was perfectly solid as a rookie last year, posting a 4.32 ERA in 10 starts, before some early March struggles got him kicked back to the minors this year. It's unlikely that he'll be a mixed-league caliber starting pitcher this year, but he deserves a chance.
Added 5:54 pm (EST)
Added 5:54 pm (EST) 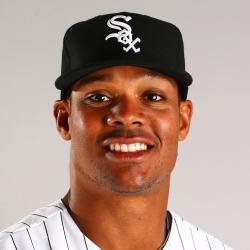 M. Taylor - RF
KC
Michael A. Taylor went 0-for-3 with two strikeouts and a HBP against the Tigers on Thursday.
Taylor has fanned in 17 of 31 plate appearances in his last eight games, and he's all of the way down to .248/.305/.321 after a strong start to the year. The Royals will eventually have to consider turning him into more of a fourth outfielder, perhaps by trying Edward Olivares in center or moving Whit Merrifield back to the outfield.
Added 5:50 pm (EST)
Added 5:50 pm (EST)