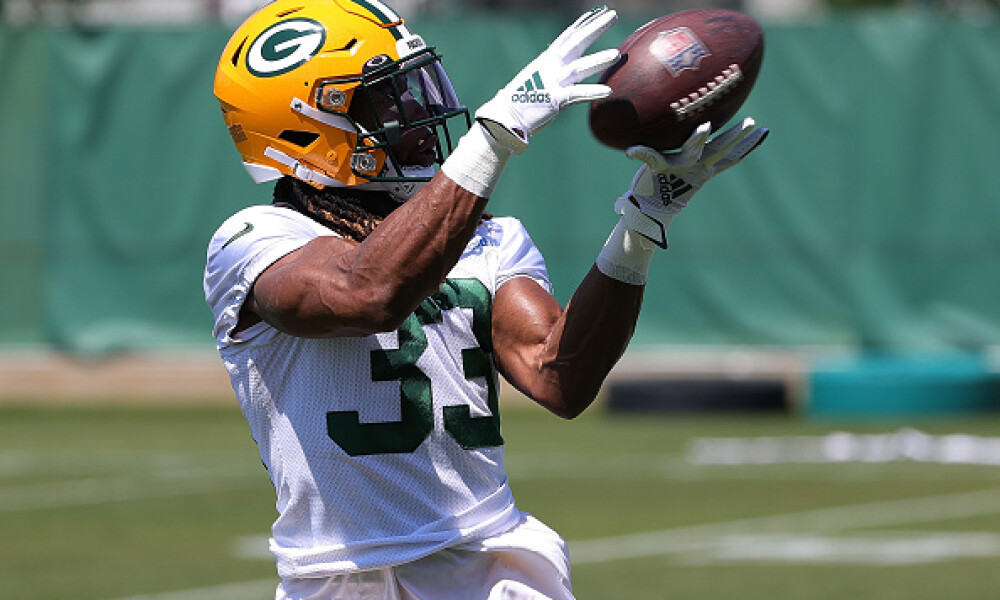 Two years ago, a Green Bay running back named Aaron Jones exploded and helped a lot of fantasy managers in 2019. In that year, Jones tallied over 1,500 yards with 19 total touchdowns! He wasn’t quite as good in 2020, but he was still very good, rushing for 1,104 yards with nine rushing scores, and catching 47 passes with two scores. He averaged 5.5 yards per carry for the Green Bay offense last year, and for the second year in a row, proved to be one of the game’s best dual-threat backs. Jamaal Williams is out of the picture and Aaron Rodgers is back in the picture, so is it going to be another productive year for Jones? Let’s take a deeper dive.

After finding the end zone 19 times in 2019, that mark dropped to just 11 last year. What happened? Well, quarterback Aaron Rodgers stole them all! Rodgers had a career year in 2020, posting a ridiculous 9.1 percent touchdown rate. Rodgers just didn’t even let Jones get a chance! There’s some room for optimism there, because quarterbacks in recent memory that have posted a touchdown rate North of nine percent saw a considerable dip the following season.

I mentioned it earlier, but he’s one of the game’s best dual-threat running backs. In 2020, he was one of just ten running backs with double-digit red zone targets last year, and he was one of just six running backs to have at least 55 total targets and 200+ carries, per PFF. Furthermore, he was one of just three running backs to have at least 60 targets and 200+ carries, per RotoViz. The other two, just for fun, are Dallas’ Ezekiel Elliott and Chicago’s David Montgomery. He’s heavily utilized in the Green Bay offense, and that isn’t going to change. The departure of Williams opens the door for some more work for him, too, which is exciting to say the least. Why? Well, yes, more volume likely means more production, but besides being one of the best dual-threat backs in the game, he is also one of the most effective.

Just how effective was Jones last year? Well, see for yourself:

When you look back at the 2020 season, he really didn’t take a step back compared to his 2019 season. The statistical output was slightly down, largely due to the fact that he just didn’t score as many touchdowns. He averaged more yards per carry and maintained a similar workload. Can it improve in 2021? Believe it or not, it seems likely.

Jamaal Williams went to the Lions, pushing A.J. Dillon up to the RB2 for the Packers. Now, the notable thing here is that while Dillon will take over Williams’ RB2 role, they are in no way, shape, or form the same running back. Can Dillon catch passes? I’m sure he can, but he had just two catches for 21 yards last year and didn’t have a single target on third down or when the team was trailing in 2020, per Pro Football Reference. In fact, of Dillon’s 46 carries last year, 35 of them came when the team was leading, and 41 of the 46 came when leading or tied. When Green Bay was down, Dillon wasn’t used. That’s incredibly noteworthy for 2021.

In 2021, Jones will be the team’s primary back and Dillon will certainly see more usage than he did in his rookie year. However, Dillon likely sees the majority of his work when the team is leading, which is likely to be the majority of the time, and in the red zone. Dillon is not going to be a large presence in the passing game, so Jones stands to benefit from added work there. Jones posted career bests in targets per game (4.50) and receptions per game (3.4) in 2020, but don’t be surprised if he increases upon those numbers in 2021. His rushing volume will remain steady, but there’s reason to believe that there’s a pretty sizable jump in receiving production, which boosts him in PPR setups.

Keep an eye on Jones’ hamstring through training camp, as he spent some time sidelined due to the injury. With some better luck in the touchdown department, the combination of his role in the team’s offense and more work in the passing attack sets the stage for another top-tier fantasy campaign from Jones. He’s an ideal RB1 target in the back half of your draft’s first round.