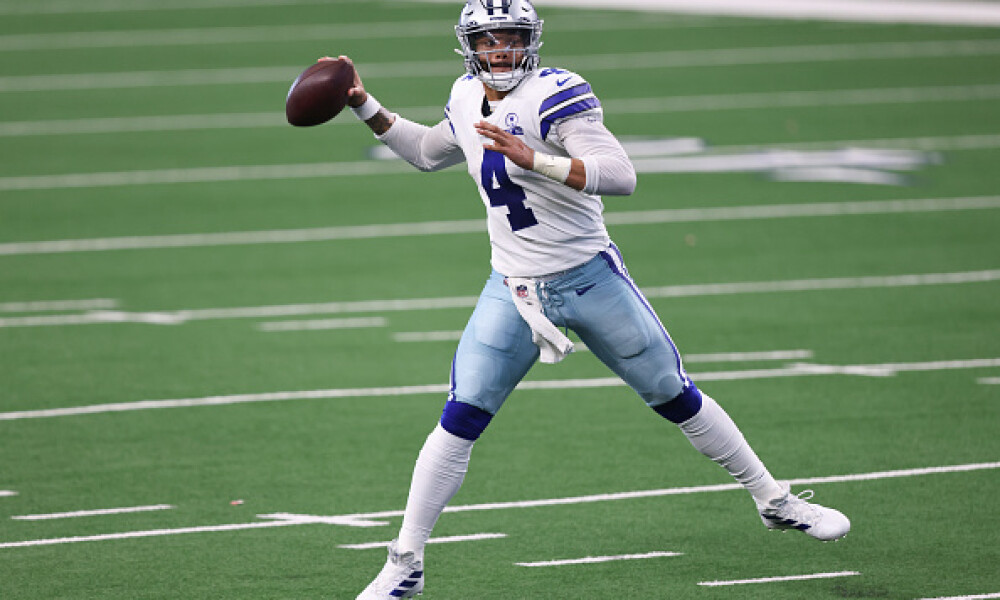 We were only treated to four full games of the high-flying Dallas passing attack led by quarterback Dak Prescott. It was shaping up to be a prolific year for the young quarterback, as he had plenty of weapons outside and an Offensive Coordinator ready to throw the ball all around the yard. Then, Week 5 happened, and a horrific, gruesome injury cut his season short. While on the field, he completed 68 percent of his passes, which would have been a career-best, and he was averaging 371.2 passing yards per game, which also would have been a career best. He had a 9:4 TD/INT ratio, and added 93 yards on the ground with three scores. He has a slew of weapons, and some regulars along the offensive line should be returning to full health, but coming off his own injury, can Prescott live up to his current average draft position of QB4? Let’s examine.

What led to the jump? Well, in the simplest of terms, Dallas made an effort to throw the ball more. In 2018 and 2019, they passed the ball 57 percent and 58 percent of the time respectively. Through the first five weeks of the season, they were throwing it a massive 66-percent of the time. If they maintained that through the whole season, they would have tied Jacksonville for the lead league in passing rate, per Sharp Football Stats.

Also, it certainly helped that Dallas was playing in shootouts. Outside of allowing just 20 points to the Rams in Week 1, Dallas went on to allow 39, 38, 49 and 34 points in its next four games. Prescott threw the ball at least 47 times in Weeks 2-4, accumulating at least 450 passing yards in each game, including 502 yards in Week 4 against Cleveland.

If you remove Marcus Mariota’s one game from last season, no quarterback averaged more fantasy points per game than Dak Prescott, per RotoViz. His hearty 26.7 points per game average is astronomical and was elevated by an insane passing workload, and the benefit of playing in shootouts more often than not. To his credit, he was incredibly effective, but there’s reason to believe he can be even better, and a more lucrative fantasy option through the air. Last year, he posted a 4.1 percent touchdown rate, per Pro Football Reference, which was actually the lowest mark of his career! His 4.1 percent rate would have ranked outside the top 20 quarterbacks last year, and compared most closely to Matt Ryan’s 4.2 percent rate. He simply has too many weapons at his disposal (Amari Cooper, Ezekiel Elliott, CeeDee Lamb, Michael Gallup, etc.) that it’s nearly unfathomable to think that he doesn’t improve upon that mark this year, and perhaps even post a career best.

He was sacked 10 times in just five games last year, but the return of a healthy Tyron Smith and La'el Collins should do wonders for the offensive line. This bodes well for the entire Dallas offense, but namely Prescott and Elliott. Do not underestimate the big boys up front. Ever.

For Prescott to be an elite fantasy option, he needs to be productive with his legs. Will Dallas run him as much following the gruesome injury? Do they try to keep him in the pocket in an effort to stay healthy? Let’s take a look at some recent injuries to quarterbacks, and see what the next year looked like in terms of usage in the run game, per Pro Football Reference.

A bit of mixed results there to say the least. However, while the team may elect to try to keep Prescott in the pocket more, he won’t become a statue. Mobility is a big component to Prescott’s game, and I don’t mean just on scrambles or designed runs. Telling Prescott to “not run” would be like telling someone who bought a Lamborghini to never drive more than 35 miles per hour. I expect Dallas to maybe be a bit more selective when they call designed runs, but Prescott won’t shy away from off-script plays and making things happen with his legs.

Prior to the injury-shortened 2020 season, Prescott had four straight QB1 seasons, including two top-six finishes, and he’s one of just seven active quarterbacks that has averaged at least 22 fantasy points per game since he entered the league in 2016, per RotoViz. It doesn’t seem like people are too concerned about his injury from 2020, as he’s currently going off the board as the QB4.

It’s hard to be an elite fantasy quarterback without sizable rushing production, so drafting Prescott as a top four quarterback insinuates that you’re confident that he’ll return without a hitch and he will continue to pad his stats with his legs. No one is doubting the arm, as he’s in a great offense that will throw it a good bit, as well as a defense that will rank in the bottom third, so there could be plenty of shootouts. He was the QB1 overall through the first quarter of the 2020 season, so while the potential upside is tantalizing, the price associated with Prescott carries some risk.