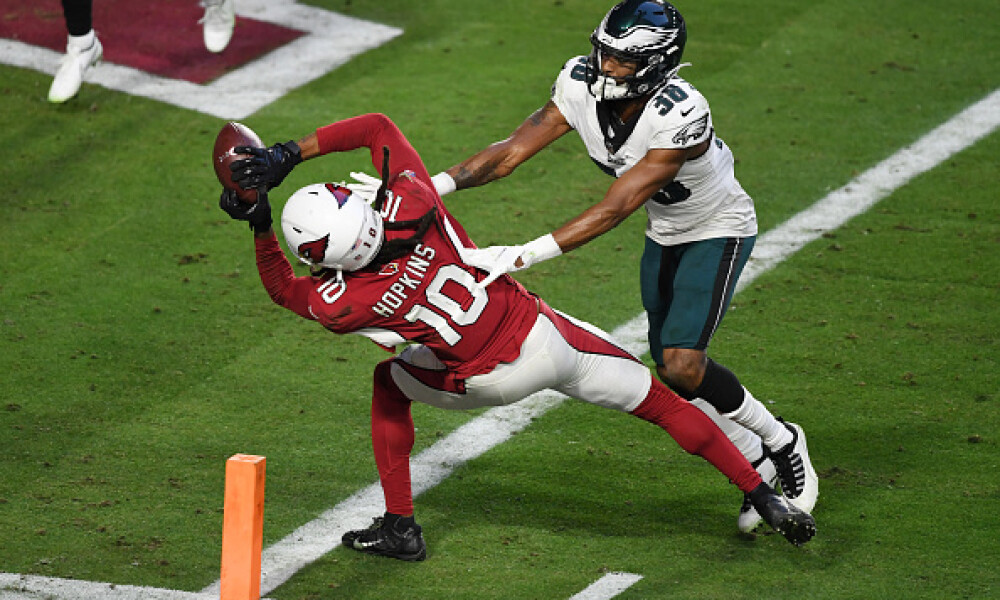 Regardless of team, quarterback or situation, you’re hard-pressed to find a more sure thing at wide receiver than Arizona superstar DeAndre Hopkins. The sure-handed wideout has missed just two regular season games in his entire career, and he’s been a top five receiver in PPR formats in five of the past six seasons, including back-to-back overall WR1 finishes in 2017 and 2018. After seven excellent seasons with the Houston Texans, the Cardinals were able to snag him for a second round pick and David Johnson, suring up their wide receiver position. In his first season with the Cardinals, he caught 115 passes on 160 targets for 1,407 yards and six touchdowns. He amassed a 29-percent target share, which trailed only Green Bay’s Davante Adams. Is Hopkins in line for another top five season at the wide receiver position? Let’s examine.

In 2020, he ranked top five at the position in targets, receptions and yards and the switch from Deshaun Watson to Kyler Murray didn’t affect him much. Is full season pace in the games he played with Deshaun Watson were eerily similar to his 2020 stat line:

There’s a sizable difference in touchdowns, but that can be attributed to Houston not really having another viable red zone threat on the roster. Interestingly enough, last season, Hopkins had 23 red zone targets, but Christian freakin’ Kirk had 22! Hopkins can make the big play when needed, but it would be great to see a larger gap between Hopkins and the second-most targeted in the red zone for the Cardinals. Will that happen this year? Hopkins will be facing his stiffest competition to date for red zone targets, as the team brought in A.J. Green and added rookie Rondale Moore in the second round of the draft. Yes, the latter is just 5’7”, but he’s no stranger to the end zone, as he scored 17 total touchdowns in 20 collegiate games, including 14 his freshman year. Hopkins should still be the top dog in the end zone, but there’s more competition than ever before.

Hopkins is more than capable of making plays down the field, thanks to his glue-like hands and ability to make the tough, contested catches. However, in each of the last three seasons, his total air yards, air yards per target, and average depth of target (aDOT) have decreased, per RotoViz and Pro Football Focus (PFF).

Entering his ninth year in the league, and in each of the last three years, his air yards and air yards per target have decreased.

As you also might expect from the numbers above, his targets are staying within the chains. Per Football Focus, you can see that the percentage of his targets have drastically switched, including a whopping 63-percent of his targets last year being behind or within 10 yards of the line of scrimmage, per PFF.

That’s a drastic change in usage. Hopkins is more than capable of getting downfield, but Kliff Kingsbury and Co. seem to want him to use his savvy in the short-to-intermediate game. Christian Kirk, Andy Isabella and Moore can handle the majority of the deep routes, and Hopkins and Co. can pick and choose his advantageous spots to do so. Is this a big knock for Hopkins in 2021? No, but it’s something worth noting, because if his deep target rate drops even further, defenses could begin to hone in on that.

The receivers around Hopkins this year are likely the best crew that’s been around him, but he’s a surefire bet for his normal 150+ targets this season. Green has had injury issues, Kirk’s consistency varies from game to game, and it’s unknown how much of an impact from Day 1 the rookie Moore can have. Arizona loves to throw the ball, and the rapport between Hopkins and quarterback Kyler Murray is rock solid.

In NFFC drafts, he’s routinely the fourth wide receiver off the board, and he can comfortably be drafted at his current price. He’s a tried and true WR1 and has been one of the best, and most consistent receivers in fantasy football for the past half decade. As long as Brock Osweiler doesn’t find his way under center for Arizona, Hopkins will be just fine in 2021.