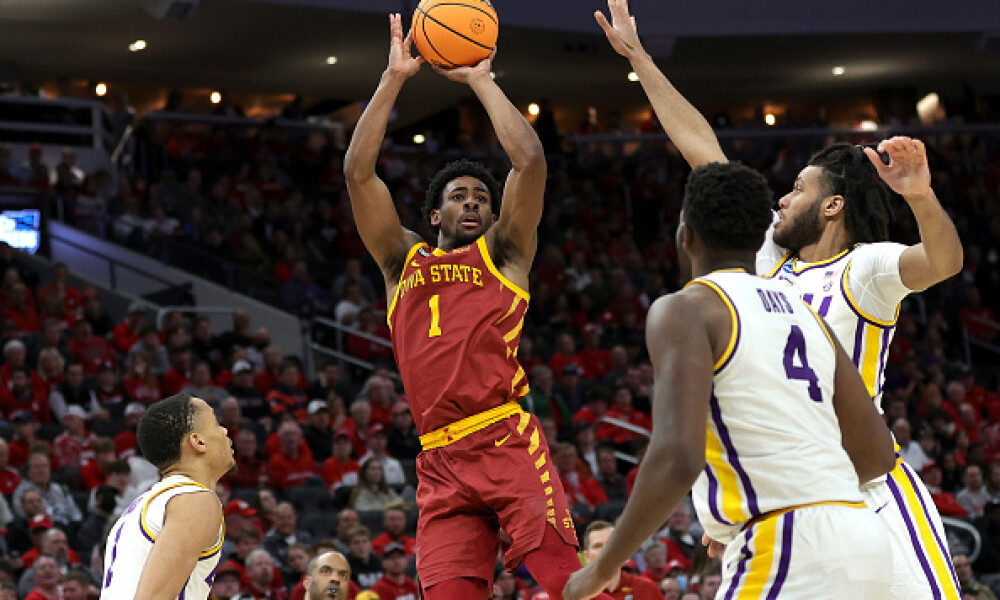 Welcome to the Sweet 16 of the NCAA Tournament! Tonight, we conclude the round with the second four games and there should be some good ones!

Keep in mind that some of the game times on DraftKings or FanDuel are earlier than the game itself may start in this tournament setup. So, pay attention to when those games lock if making late lineup changes or pivots. Without further ado, let’s dive in!

THE SLATE (all times ET)

Brockington has been the leader of this offense for the entire season after transferring from Penn State. He leads Iowa State and is fourth in the Big 12 in scoring (17.1 points) and rebounding (6.8) and gets a shot at Miami which has the worst overall defense of the eight teams and especially does not defend the three well (52.9%- 298th). Brockington is the top overall guard on the slate and is viable in all formats.

A year ago, UCLA made a surprise run to the Final Four and it was Johnny Juzang, who helped provide a spark for the Bruins.

The magical story through a bubble in Indianapolis came to an end with an overtime loss to eventual national runner-up Gonzaga. The team’s roster from last year is virtually intact, with Juzang among the Bruins’ top players. This is too cheap of a price for a player that has hit 4X value in his last three games with a 24% usage rate while scoring 14.2 points over his last five.

Martin, the Big 12 Preseason Player of the Year, battled injuries all season and played a minor role in Kansas winning a share of the regular season Big 12 title. Then boom - the postseason.

He played a huge role in the Big 12 tournament championship, and an even bigger role in KU’s first two NCAA tournament victories. He scored 20 points (37 DKFP) in the second-round game against Creighton to lead the Jayhawks to the Sweet 16 in Chicago. He will be high owned tonight due to a lack of value under $5K. Plug and play Martin in cash and possibly fade him a bit in some GPPS.

Saint Peter's is the Cinderella of this season's NCAA Tournament and 6-foot junior point guard Matthew Lee is one of the Peacocks' key players. He averages seven points per game and has handed out a team-high 83 assists while playing 26-28 minutes. He won’t win you a GPP but should return 4X value on his price against a Purdue defense that can be exposed.

Doug Edert (STP) $4.6K DK/5.5K FD
Scored 20 and 13 points off the bench in each of the Peacocks’ first two games. He’s leading the team in scoring so far and doing it all with the type of swagger making him the fan-favorite of the St. peter’s Cinderella ride.

Williams played one of his most efficient games of the season, scoring a team-high 22 points on 10-of-13 shooting, helping #3 Purdue defeat #6 Texas in the second round of the NCAA tournament on Sunday. The 6-foot-10, 260-pound Williams, with quick feet and the passing ability of a point guard, should be concentrating on exploiting mismatches and putting the ball in the hoop against St. Peter’s tonight. Minutes have been the issue holding Williams back as an elite play every night, but you just can not ignore a 34.2 usage (11th in the nation); 31.7% shot; 14.8% offensive rebounding (22nd); 28.7 % defensive rebounding (17th) and 34.6% assist rate (23rd). He's usually a GPP play but Williams is a borderline cash play on this slate.

In the first two games of the NCAA Tournament, Brady Manek has been balling. The stretch forward scored 28 points against Marquette (at a 67 FG% clip, including 50% 3PT) and 26 against Baylor and that was before he even got ejected for a flagrant two foul. Besides the Virginia Tech dud (11 DKFP), Manek has now scored 30+ DKFP in seven of eight games and is firmly in play tonight against UCLA.

Armando Bacot (UNC) $9.4K DK/8.7K FD
Highest-priced player on the slate with best floor & ceiling. Bacot will be hard to get to in cash due to lack of value on the slate but can nuke GPPs - 24% usage and 43.9% combined rebounding.

KC Ndefo (STP) $7.2K DK/8.2K FD
One of the best shot blockers in the nation will have his hands full tonight against Purdue - but Ndefo should make value on blocks and rebounds alone.

UCLA starters Cody Riley, Jules Bernard, and Tyger Campbell have been together for four years now and when March comes, they turn it up a notch. Riley is going to be the muscle tonight that tries to slow down Armando Bacot and force him to lower that shoulder on offense and get in foul trouble. He’s been in these battles before and will not be intimidated. Riley is coming off a 28-minute game – his most minutes played since early April. Riley will also benefit from UCLA needing size again tonight and UNC is a pace up for the Bruins. With forward value being so weak on this slate, the most you can hope for is 5X value from the UCLA center but that should be enough.

Hassan Drame G/F (STP) $4.3K DK/5.2K FD
Purdue is one of worst defenses on slate and Drame averages 29 mins and 23 DKFP in the two tournament games.