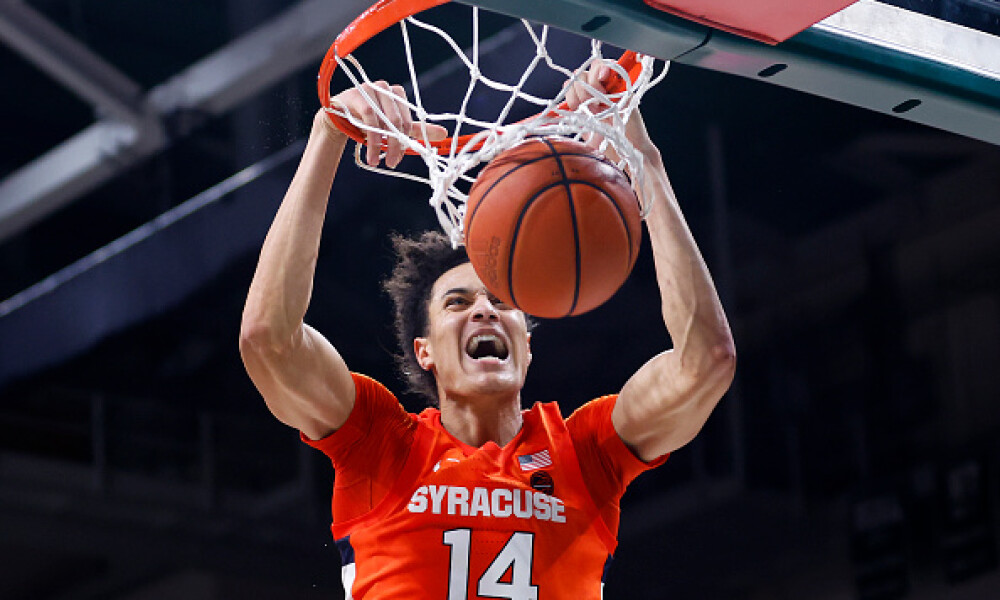 Welcome back to another weekend of college basketball action and CBB DFS lineup building! We have a huge Saturday main slate of games and there are plenty of intriguing matchups and top-tier players for our CBB daily fantasy picks. You can build CBB DFS lineups today on DraftKings for the 12-game main slate tipping off at 12pm ET with matchups from all of the top conferences. If you're looking to play college basketball DFS this season, get full access to our CBB DFS Playbooks and Core Plays with a Fantasy Alarm All-Pro Subscription. Check out all the CBB DFS top picks, lineup strategies, teams to target, and value plays to lock in for today's college basketball action. If you have any questions about CBB daily fantasy lineup strategy, ask away in the Fantasy Alarm Discord chat. Now, let's jump into the CBB DFS top plays and lineup picks for Saturday, January 21st.

Terry Roberts has taken full advantage of the fast-paced downhill attack that has helped an improving Georgia program to an unexpectedly great start to its season. The 6-foot-3 New York native via Bradley and Florida SW State was awesome yet again on Tuesday, scoring a team-high 21 points with five rebounds, three assists and a steal in an 85-71 loss at Kentucky. Bruce Pearl called Roberts “the real deal” and his combo of quickness, toughness, speed, and athleticism keeps defenders off guard. Roberts has a 31.1% usage (18th) and 33.4% shot rate (14th), so lock him in as one of the top mid-priced plays on the entire slate.

In the first matchup between Providence and DePaul, Carter lit up the Blue Demons with a career-high 22 points and played amazing defense with five steals and four blocks. We cannot expect another game like that, but Carter is still in a solid spot here and a cash-play anchor. Over his last five games, he is playing 30+ minutes and averaging 15.5 points plus is putting up 30+ DraftKings fantasy points (DKFP) in six of his last seven games. If you stay away from the big $9K-and-up studs and go balanced, then Carter is an excellent fantasy play in all formats today.

A member of the all-AAC Freshman team last year from South Florida, Murphy made his long-awaited DePaul debut this week against Xavier with eight points, two rebounds and two assists (15 DKFP). He did that at all in 23 minutes, so he wasn't shy by throwing up 12 shots. Murphy broke up the potential game-winning play on a lob into Jack Nunge to cap off the night. Murphy, who averaged 10.1 points, 3.2 assists and 2.8 rebounds in his South Florida career, should play about the same amount of minutes today, but note that he played more than expected in his debut due to team foul trouble.

Edwards, coming off a career-high 25 points and 11 rebounds in a close loss at Miami, has recorded nine double-doubles on the season. He is now second in the ACC with 11 rebounds (0.2 RPG behind Armando Bacot) and first in blocks with 2.9 BPG. Edwards has been fantastic to start the season as he's averaging a double-double per game (13.9 PPG and 11.0 RPG). However, Syracuse isn’t consistently feeding him on offense. In wins this year, Edwards averages over 16 points per game, while in losses, he scores only 11. As favorites today, the Orange should engage Edwards more on offense against the Georgia Tech zone and incorporate the post element of its offensive attack. I'm all-in on Jesse Edwards today.

Ohio State has one heck of a roster on paper and it's built around the freshman phenom Sensabaugh — the Big Ten’s highest-scoring underclassman. If this motion offense starts humming and they attack the rim, there will be plenty of mismatches today in a fantasy-friendly matchup with Iowa. It all starts with Sensabaugh dominating the inside as he is one of the safest players on the slate with 33 DKFP in five straight and the ninth-highest shot rate in the nation.

Ohio State has lost five straight, but this is DFS and going right with another Buckeye. His price is starting to rise again but $6.6K is still too low which makes Key a core play again today. He is coming off an 11-point, 10-rebound game in the loss to Nebraska and now has 13 double-double games on the season. Key has been in the $8K range all year and besides the double-double last game, he had 11 points and nine rebounds against Rutgers last Saturday. Today, Key is back at home against a weak Iowa defense that will push the pace. Lock him in your cash lineups.

This is a talented, but raw player that is now getting playing time earlier than expected with Liam Robbins out with a bone bruise and foot sprain. Quentin Millora-Brown is a solid veteran, he isn't the type of player who will play more than 20 minutes per game, so that means freshmen Dort will need to step in and fill a larger role. Dort is athletic and an excellent defensive player and was averaging 2.6 rebounds in just 7.1 minutes per game. He does need to stay out of foul trouble but if we can get 20 minutes out of him, he can easily be at 6-8X by the end of the game against the Georgia interior defense.