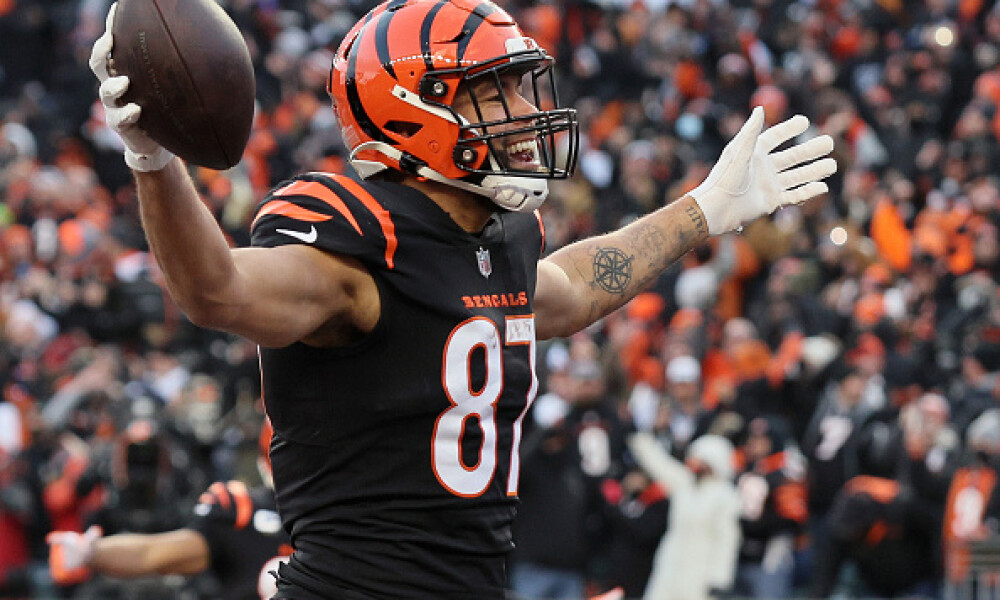 It’s here, folks. Super Bowl 56 is upon us! The BIG GAME between the Los Angeles Rams and the Cincinnati Bengals. And it’s our last chance to cling to fantasy football. So we have to play DFS on DraftKings, FanDuel and Yahoo, right?

Typically for a single-game slate like this, it’s pretty straight forward and there are usually three options.  You pay up for the best tight end in the game.  You pay down for the other team’s starter.  Or you throw a dart at the best backup tight end.  BUT it’s not that simple as of right now for us because there is some uncertainty with the starting tight ends for BOTH teams based on knee injuries sustained in the conference championship games..  So let’s just look at all of them.

Of the two starting tight ends, CJ Uzomah is the one that’s more likely to actually play. Even though he hasn’t practiced yet this week, he said he plans to play and even dramatically threw his leg brace at their pep rally.

He’s also straight-up cheaper than Tyler Higbee on both Yahoo and DraftKings, while not necessarily being the worse option if both were healthy. If you are playing a format that requires a tight end, or simply just want to differentiate with a less-common play, Uzomah could be viable.  The reality, though, is that DFS sites don’t really give you a discount for players that “might play” - they price them based on them playing.  So, the floor is pretty low if he suits up and then the knee takes him out of the game.

As of now, there hasn’t been much optimism on Tyler Higbee.  If everyone were healthy and all things were equal, Higbee would have the best tight end matchup and might have been a decent option.  But, as we just mentioned, you don’t get any sort of injury discount. So, besides being injured, Higbee is still the most expensive option at roughly 14% of your budget on both DraftKings and Yahoo.  At that price, we’d honestly rather pay for a cheap WR or RB or even pay down for a kicker.  Barring some miraculous flip to 100% health, I’m out on Tyler Higbee in DFS for the Super Bowl.

Oddly enough, the deployment of Drew Sample is pretty simple and it boils down to two things.  First, he’s only remotely viable if CJ Uzomah is out.  Any time there is a risk the starter might be out, DFS just prices these guys up in advance to be sure that they aren’t giving away any freebies.  Which brings me to my second point: DraftKings priced Sample up to $6,300, which is 12.6% of your budget and not far behind Uzomah at 13.2%.  Yahoo, however, did not crank the price up nearly as much as Sample is $10 or only 7.4% of the budget (compared to 11.85% for Uzomah).  So, if Uzomah is out and you want to use Sample somewhere, Yahoo is the spot. Fair warning though - a lot of people will likely be on him if that happens, so you might need to also differentiate your lineup another way.

Kendall Blanton is an interesting one because, like Sample, he did play a good chunk with the starter out and he’s even found the end zone this year.  That’s partially why Vegas prop bets have Blanton at +240 to score a touchdown this week and Sample at +360.  If both starting tight ends are out, Blanton at $6,600 on DraftKings is more appealing than Sample. If you are making your lineup on Yahoo, however, the deep discount you get on Sample is simply too appealing.

DraftKings is no fun, so they don’t have all the deep-cut players listed for their Showdown slate. Instead, you're only limited to the four options above.  On Yahoo, though, they will let you play whomever.  There are going to be folks that will be interested in Brycen Hopkins, but the Rams run one of the most highly-consolidated snap shares in the league and don’t really love to mix-and-match - hence why Hopkins played zero snaps last week even when Tyler Higbee went down.  The only way I’d even consider Hopkins is if Higbee is out, Uzomah is IN, and you absolutely need a bare minimum-priced option on Yahoo.  If both Higbee and Uzomah are out and I need a $10 TE on Yahoo, I’m going with Mitchell Wilcox.   When the Bengals rested their starters in Week 18, he saw 30 snaps and actually caught three of five targets. In the AFC championship game when Uzomah went down, he at least played 18 snaps (though he only ran two routes).  All we are looking for at this price point is a touchdown, anyway, and Wilcox could be that random dart. At least CJ Uzomah thinks he’s a good athlete.