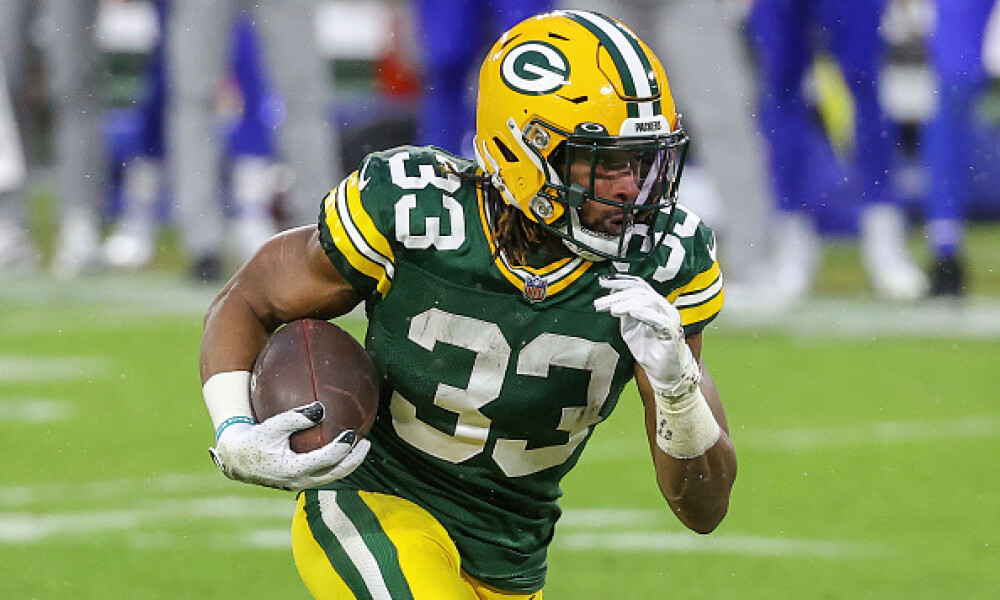 Fantasy running back. The engine that drives the train. Nothing is as highly coveted in typical fantasy formats than a high end running back. And for good reason. In 2017 Todd Gurley scored 107.1 points in the three weeks of fantasy playoffs. Just last season, Alvin Kamara scored SIX touchdowns in championship week. SIX.

This is the definition of “league winner”. You want it. You NEED it. On the flip side though, it’s also the most volatile position. No position in fantasy experiences more wear and tear, with injuries like turf toe swiftly ending the careers of fantasy beasts like Shaun Alexander and Ladanian Tomlinson. No position has as short of a leash; one day you are scoring four touchdowns vs. the Colts and the next you fumble or miss a meeting and you are benched or released (looking at you, Jonas Gray).  And no position faces the tremendous value swings that running backs experience in the offseason. So, just as we did with the top free agent wide receiver signings, let’s take a look at the top free agent running back signings so far and their impact.

Aaron Jones has been a FORCE in both real life and fantasy football.  He’s finished as a top five fantasy RB in back-to-back seasons, scoring 30 touchdowns over that span. In 30 games.  I don’t have to explain why a touchdown per game keeps the #DynasyFFRotoDoctor away.  Now, a lot of people say that the success of the offense as a whole is a big part of his individual success and it probably is. With this contract he signed, he will be there for an absolute minimum of two more years given the guaranteed money and dead cap tied to him so that narrative doesn’t really matter, now does it? The buy low window for Aaron Jones has closed.

Let us now please have a moment of silence for AJ Dillon owners.

Thank you. The perception among many was that, by making it this far without an extension, it was a foregone conclusion that Jones was gone in free agency. And it made a lot of sense.  They just drafted power back AJ Dillon out of Boston College in the second round and could simply sign Jamaal Williams to a cheap deal for passing downs. Easy enough. This contract flips that narrative on its head. Now Jones is locked in for essentially the remainder of Dillon’s contract and Jamaal Williams has signed with the Lions. Some expect Dillon to take over Williams’ pass work but I predict a different split. Jones is the better pass catcher while Dillon is a 247-pound plodder so I expect a split that looks more like what the Saints do. That would have Aaron Jones in more of an Alvin Kamara role playing the “important” snaps including pass work and Dillon subbing in to spell him and for short down work, like Latavius Murray . If this does happen to be the case, Dillon may be a touchdown vulture of sorts but the lack of pass game usage and unpredictability of touchdowns will make him a difficult fantasy asset to trust in anything other than best ball leagues or perhaps deep standard formats.

Can you fit two running backs in one coffin?

We knew that Kenyan Drake would disrupt whatever backfield he landed in but given the number of RB needy teams like the New York Jets, Miami Dolphins, Houston Texans, his own Arizona Cardinals, etc. it came as a surprise that he landed somewhere that already has a marquee back. Playing with a mobile QB limited his usage in the pass game with Arizona but he’s a capable pass catching back and he is already telling reporters that Jon Gruden expects to have him lining up all over the field including wide receiver. From a fantasy analyst perspective, let’s all just take a moment to appreciate the teams and players that just straight up tell you what they are going to do, unlike good organizations.

Josh Jacobs was already limited in the pass game before this. Now his passing game upside is virtually vaporized. Over the last five years, top ten fantasy RB’s in half point PPR have AVERAGED 54.8 receptions with a median of 53.  Don’t believe me? Boom, chart. 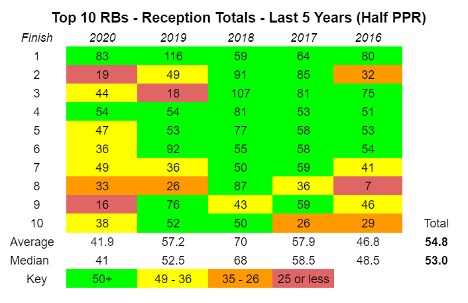 For those wondering, the two red RB’s in the top five are both Derrick Henry . The last RB to finish top five with less than 25 catches before him was Marshawn Lynch back in 2012.  In the most recent season, there’s a lot less green than usual but you also have to remember that guys like Christian McCaffrey , Saquon Barkley , and Austin Ekeler all missed a significant chunk of the season. Oh, and there was a pandemic. Catches matter. And, with the swish of a pen, Josh Jacobs went from a bell cow role with minimal competition to the worse half of a split backfield. And, on top of that, he might be facing a multi-game suspension stemming from a DUI arrest this fall. Ouchies. On a side note, if anyone was holding on to pass catching backs Jalen Richard and Theo Riddick , they can safely be dropped at this point.

Is there more of a gum chewing, butt slapping, players’ coach in the league than Pete Carroll?  Maybe Mike Tomlin but Pete is up there. His fun and seemingly easy going demeanor on the sideline and with his players makes it hard to remember that he’s actually the oldest active coach in the league. Maybe it’s his grumpiness that makes Bill Belichick seem like he’s 20 years older than Pete but not only is that not the case, but Carroll was actually the last guy to coach the Patriots before Belichick over 20 years ago. Weird!

Chris Carson has certainly been one of the biggest beneficiaries of Carroll’s player-friendly ways, managing to hold onto his job despite being an undrafted free agent and fumbling 11 times over the last three years (only Ezekiel Elliot has fumbled more while also touching the ball 272 more times than Carson). In fact, Carson started the 2019 season losing a fumble in each of the first three games then also fumbling four times over a three-week span starting in week nine. He’s still the guy. It’s not exactly Remember the Titans over there with Pete.

The reality of the situation is that Pete likes HIS guys and this contract clearly illustrates what we already knew: Chris Carson is HIS guy. First round pick Rashaad Penny has shown flashes but he’s never been able to stay healthy while Travis Homer and DeeJay Dallas clearly didn’t show enough to threaten that job. Carson is the guy in what should once again be a good rushing attack so he should once again provide owners with value at his ADP. As we briefly mentioned earlier and as Andrew Erickson mathematically laid out in this article, mobile QB’s aren’t ideal for fantasy RB’s from a pass catching standpoint so there is a bit of a cap to Carson’s value in the immediate future but no one can run forever in this league. So, at some point, Russell Wilson should transition a bit towards more of a pocket passer and Carson is surprisingly only 26 so he realistically could be around for that. Until then he remains a rock solid RB2 with backend RB1 upside.

Regardless of how you feel about his on-field play or the contract itself, Jamaal Williams is a fun dude to have on your team if only for the post-game interviews. I mean, how many other guys are going to explain a good game in the rain by saying he felt like a mermaid or like Spongebob out there. For that, I will defend Jamaal Williams to the death.

I guess we have to talk about actual football though so here we go. Jamaal Williams is a prototypical version of what we like to call a “satellite” back or “pass down back”. He has proven that he can be a capable runner with around ~500 yards rushing and a couple touchdowns in all four of his seasons, never having fewer than 460 yards but also never having more than 556. But where he really shines is the passing game, specifically, in pass protection. In fact, he was graded by PFF as the sixth-best pass blocker of ANY running back in 2019 and, in 2017, only Marshawn Lynch graded higher. Just one sack can tank your grade in those formulas so multiple seasons within the top ten (out of 152 qualified RB’s last year) is quite the accomplishment.  And of those 152 RBs, guess where D'Andre Swift ranked in pass blcoking? RB #108.  So with 32 teams that means that every team could essentially have three guys that were better at pass blocking than D'Andre Swift.  And now the Lions have two.

I don’t care what type of mental gymnastics you want to use, this is not good news for D’Andre Swift and Kerryon Johnson .  People are going to attempt to justify it as “neutral” for Swift saying they are just filling out the roster but it’s certainly not a “good” thing that they brought in a guy who primarily plays passing downs. You fill out the roster by paying Theo Riddick one-year, $1.175 million with $50K guaranteed, not by making Jamaal Williams the fourth-highest paid running back in free agency with over $3,000,000 guaranteed. In fact, now that I think about it, I’ll go as far as to say that it’s a “bad” thing for Swift and Kerryon. And here’s why.

Pass protection is not as simple as people make it out to be. A lot of these plays are incredibly complex with built-in options that essentially tell you “if this, then that.” They don’t just say “hey, Jamaal, you are an eligible receiver on this pass play, but we want you to block someone no matter what.”  Maybe on some plays, but most of them work more like “Jamaal on this play you are responsible for any blitzing linebackers or corners and, if no one comes, you peel off to the flats and be the safety valve passing option.”  Some RB’s get it and some don’t. Gio Bernard gets its, Philip Lindsay never did (more on that in the next RB article). By the nature of this role, these are pass-catching opportunities. And, based on his skill set and what they paid him, they are opportunities that will go to Jamaal Williams . So, if someone says “Jamaal can have the pass blocking snaps, Swift can take the good snaps” just remind them that you can’t catch a ball if you are blocking but you damn sure can’t catch it if you are on the sideline. That doesn’t mean D’Andre Swift can’t be a good back in fantasy football but it certainly makes that path a little more difficult.