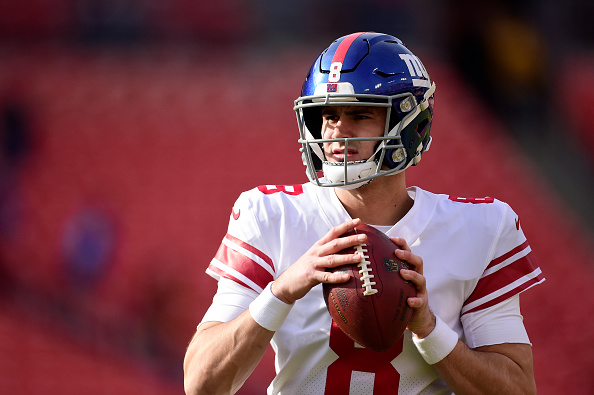 “With the sixth pick in the 2019 NFL Draft, the New York Giants select, Daniel Jones”. With that statement at last year’s draft by Roger Goodell, Giants fans screamed at their televisions, and other football fans scoffed at how stupid the pick was. Surely, the Giants could have waited for their later first round pick to get Jones who wasn’t touted by anyone as going that high in the draft. Jones was written off before he even went to training camp, and the pick was seen as a failure.

Reports started getting better early in camp that he was impressing, and actually looked good. Surely, that was just coach speak we all figured. Eli Manning went into the season as the starter, and we wondered when we would see Jones and what kind of impact he would have when he did come in. It took only two games with Eli Manning before we saw the shift, and in Week 3 Jones was named the starter against Tampa Bay. It was a perfect scenario for Jones as the Bucs weren’t a high-powered defense and he torched them for 336 passing yards and four total touchdowns. Jones showed a lot of poise and ran in his second touchdown to give the Giants a lead they would not relinquish.

Jones certainly had his ups and downs in his rookie season, but the flashes of greatness outweighed the bad in my opinion. He played a lot of the year without Saquon Barkley who had a high ankle sprain, and even when he did return it was obvious that Barkley wasn’t quite right. Jones had five 300-yard games in his rookie season and had four games with four or more total touchdowns. The Giants offensive line wasn’t great, they had injuries all over the offense, and Jones still managed to throw for 24 touchdowns and run for two more. He missed a couple of games himself with an ankle sprain but came back strong. But what does 2020 hold for Daniel Jones?

Honestly, he is the young quarterback that I am the highest on. Jones will never be Lamar Jackson , and he won’t even be Josh Allen , but the kid can definitely move around and run when he has to. He ran for more than 30 yards in a game three different times, and when he didn’t take off, he showed good mobility in the pocket. He ran for just two touchdowns, both of which were in his first start, but if you watched the Giants you would see that he has the athleticism to do more.

The Giants did bring in a new coach in Joe Judge, and a new offensive coordinator in Jason Garrett. You must be familiar with Garrett, who had been the Cowboys head coach for a number of years. Garrett’s offensive system is a downfield air attack, with multiple shots for big plays. Jones doesn’t possess an elite arm like Patrick Mahomes , but he certainly has the arm strength to get the ball down the field to his receivers. This should help increase Jones passing yards as well as his passing touchdowns.

He has good, although unspectacular weapons. The run game is top notch with Saquon Barkley , so opposing defenses will not just be able to pin their ears back and come after Jones. Not only that, but Barkley is elite at catching passes out of the backfield. And while he doesn’t have a household name at receiver, the Giants have three solid options. Darius Slay ton took the league by storm in his rookie year as a deep threat, and New York also employs two sure handed possession receivers in Golden Tate and Sterling Shepard . Add to that mix Evan Engram who is one of the best at the tight end position if he can stay healthy, and Jones has an embarrassment of riches to throw the ball to.

The biggest problem that Jones has to fix in 2020 is his turnovers. He threw 12 interceptions in 13 games, but he also fumbled a ridiculous 18 times, losing 11 of them. There is no way that he can continue to lose the ball at this rate. It seemed at times in 2019 that the second he was touched that he just flung the ball out of his hands and hoped. Jones had similar problems in college at Duke, but he will not be long for the league if he turns the ball over an average of twice a game. Reports are that he has been training with an emphasis on ball security this offseason, and that is of utmost importance. I believe that he will get his fumble numbers in half, if not even better and it will be less of an issue.

Jones should only mature the longer he is in the league, and everything should get better for him. He has all of the tools to be a great starter in the league. I think that he is perhaps the quarterback that is being drafted outside of the top 12-15 that has the best chance of putting up top ten fantasy quarterback numbers by season’s end. Not only does he have some upside with his ability to run the ball, but he also has solid weapons to throw to. He will have to learn a new offense this season, but it is more of a downfield type system that leads itself to better fantasy numbers.

Jones also has the moxie and the leadership needed from a top-flight NFL quarterback. He has the backing of the organization who selected him sixth overall that has every motivation for him to succeed in this job. With Eli Manning gone, there is no threat from the bench to unseat Jones as the starter if he struggles. Everything is pointing towards Jones being a breakout candidate in 2020.

It is a bit of a gamble for you to have Jones as your starting quarterback in a traditional one quarterback league if there are ten or twelve teams. However, if you are in a two quarterback or superflex league, Jones is the ultimate guy to have as your second signal caller. If you are one to really wait until the last couple of rounds for your starting quarterback, I offer up Jones as an option there before an old, broken down Ben Roethlisberger . We clearly need to see more from Jones, but what we have watched so far has shown many positive things, and his future appears to be very bright from a fantasy perspective.