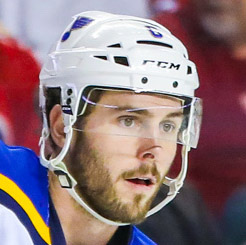 Joel Edmundson scored a goal in Wednesday's 5-1 loss to the Ottawa Senators.

Edmundson scored off a set-play after the Canadiens won a face-off in the offensive zone to tie the game, 1-1, but the Habs just didn't bring their best effort tonight. The rugged defender finished the night with a minus-1 rating, two penalty minutes and one shot on goal in 20:22 of ice time. The 27-year-old has three goals and 13 points in 52 games this season. Tyler Toffoli and Nick Suzuki picked up the assists on Montreal's only goal.  Yesterday 9:55 pm (EST)

NHL Igor Shesterkin will get the nod on Thursday night

NHL Tomas Tatar (lower body) will be back on Thursday

A. Stalock - G
EDM
The Edmonton Oilers won't dress Alex Stalock on Thursday night against the Vancouver Canucks.
Stalock has yet to dress in a game this season, missing half the season due to an upper-body injury. Kris Russell, William Lagesson and Evan Bouchard will also be scratched.
Added 8:37 pm (EST)
Added 8:37 pm (EST)

J. Chatfield - D
VAN
The Vancouver Canucks won't dress Jalen Chatfield against the Edmonton Oilers on Thursday night.
This is three straight games for him as a healthy scratch. The 24-year-old has a point in 15 games this season. Olli Juolevi will also be scratched.
Added 8:06 pm (EST)
Added 8:06 pm (EST)

P. Danault - F
MTL
The Montreal Canadiens announced that Philip Danault won't return to Thursday's game against the Toronto Maple Leafs due to an undisclosed injury.
This have gone from bad to worse for the Canadiens. A quick rule out is never good and fans will be hoping this isn't a long-term issue with the Playoffs right around the corner. The 28-year-old center is an unrestricted free-agent at the end of the season. He has five goals and 24 points in 52 games.
Added 6:58 pm (EST)
Added 6:58 pm (EST)

J. Gardiner - D
CAR
The Carolina Hurricanes won't dress Jake Gardiner on Thursday night against the Chicago Blackhawks.
Make this five straight for him in the press box. James Reimer will also be a healthy scratch as the third goaltender.
Added 6:53 pm (EST)
Added 6:53 pm (EST)