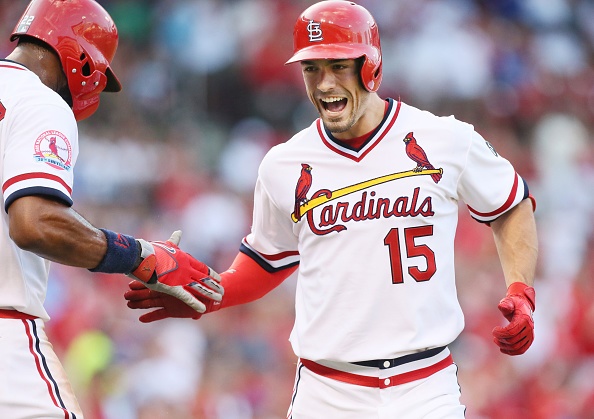 Those of us that do this fantasy thing for a living often get the reputation for having "their guys" and I'm no different. If I drafted Kole Calhoun on one more team he was going to get a restraining order on me. Other players that were commonly perceived as my guys back in the spring were Leonys Martin, A.J. Pollock, Yoenis Cespedes, Shane Greene, T.J. House, Dalton Pompey, Jose Peraza and John Jaso.

It's rare that I don't do a draft or a mock without the results being publicly available. Even my private National Fantasy Baseball Championship (NFBC) leagues are known since I'll share the teams publicly in writing and on discussion forums. It doesn't take long to see the players that are always on my teams. The reason is simple; my expectations for the various players are rosier than the market so I usually end up taking them at a spot where I feel they're worthy, even if others aren't so optimistic. They really aren't my guys. It's not like I'm going to get a certain player regardless of the cost. Later in the drafting season I'll often miss out on one of my perceived guys as someone inevitably thinks they're messing with my master plan by jumping Calhoun up several rounds or out-bidding me for Jaso (both of which happened in the spring). I don't like the player - I like him at the price I'm usually able to acquire them. There's a significant difference.

I've been doing this long enough that I already know some players that will be called my guys come next spring. Some will work out, some won't. Twitter jokes will be made but hopefully I'll manage to avoid a restraining order. Here's a list of players that I bet will populate many of my early industry mocks and NFBC drafts.

Randal Grichuk, OF, St. Louis Cardinals:There's still a little more story left to be written since Grichuk is slated to return from the disabled list in September to fortify the Redbirds down the stretch and into the playoffs. Heck, if he has a strong post-season the playoff hype may raise his market cost. Short of that, the anticipation is my brethren will correctly warn against Grichuk's generous strikeout rate and good fortune on batted balls in play. This will knock him down some draft boards. What often is ignored in this scenario is the player improving his skills to counter regression from something like BABIP or home run per fly ball correction. I'm not saying Grichuk will suddenly drop his strikeout rate into the teens, but at just 23 years old, he's certainly at an age he can drop it into the high twenties, which is a start. While he's not a stolen base fiend, between the steals he has amassed and the triples he has recorded, there's some stealth speed which should help when his BABIP regresses. There's plenty of risk here so Grichuk is the perfect example of a player for which I won't reach. However, if the market does what I expect, and over-correct for his horrible contact rate along with enjoying some good luck when healthy, there will be a built-in buffer where I can bet on the come and hope the latent skills I see indeed manifest.

Delino DeShields Jr., OF, Texas Rangers: Since I first learned how to convert stats into dollars, the criticism is I overvalue steals. Who knows, maybe I do. Or maybe I do things right but it's perceived wrong since the market sets the price differently. No matter, it's not a coincidence that a chief contribution of many of the players listed above is a speed component. Others are going to look at DeShield's Jr. and deem him non-mixed league worthy since he's a one-trick pony whereas I'll load up on power early and invest in said trick later. I don't expect an eye-popping number of steals from DeShields Jr. so he won't be considered a cornerstone for the category. There's some risk that the Rangers upgrade center field over the winter as they retool for a playoff run with Yu Darvish and Cole Hamels sitting a top their rotation, though having his cheap contact getting regular playing time could help club economics. There's also a chance DeShields Jr. is dropped in the order. Regardless, between his excellent walk rate and very good stolen base success rate, DeShields Jr. should continue to get on and when he does, he's a threat to run. I'm happy to take that risk as my fourth outfielder while others are looking at him as a fifth outfielder or utility.

Francisco Lindor, SS, Cleveland Indians: I'm kicking myself, Well, metaphorically anyway. Right after the All-Star break I outlined a column called "It Could Happen". The theme was going to be discussing how a lesser player could plausibly outperform a better player the rest of the way. The headline duo was going to be Lindor and Carlos Correa with the bold suggestion that Lindor could be the better fantasy shortstop for the bulk of the season. The message wasn't going to be it will happen. but rather it could happen. Obviously, there's still plenty of season left for Correa to go on another streak, but the premise has borne out as Lindor has been quietly killing it lately. The key with Lindor is he came up the same season as Correa, Kris Bryant, Joc Pederson etc. Further, Lindor's reputation is more of a defensive wizard than offensive stalwart, This serves to get him lost in the shuffle. I'm not a prospect guru, I need to rely on others to get me up to speed when it comes to the youngsters. After talking to some people I trust, the comparison that kept coming up was Erick Aybar. I know, it's Erick Aybar - no big whoop. But here's the thing. For the past several years, Aybar has been a wonderful player for those that ignore scarcity and wait on filling the middle infield spots. If I can have as much success using Lindor as I have with Aybar, sign me up!

?J.T. Realmuto, C, Miami Marlins: If you take a minute to review the players discussed thus far, you'll see a common thread that may not be outwardly obvious since it extends beyond player performance. There's always a secondary reason that gravitates me to the player. The intellect wants to call it game theory but it's really just narrative I hope comes to fruition. With Grichuk it's the expectation of an over-correction of his deficiencies and good luck. With DeShields Jr. it's the different valuation of steals. With Lindor it's the lack of hype and defensive reputation. With Realmuto it's the perception that Marlins Stadium is a pitchers park and the hope he's dismissed based on team context. The truth is the Fish play in a venue that squashes power but boosts runs. Realmuto's game is perfect for his home stadium. He makes solid contact, has gap power and runs well - forget for a catcher, he runs well period. Assuming Giancarlo Stanton can stay healthy and another year of maturity for Christian Yelich's and perhaps Marcell Ozuna, the Marlins' offense should improve which will be reflected in Realmuto's production. Runs and RBI are overlooked when we take a snapshot view of a player. We're not talking about Mike Piazza here, but I bet my run production projections for Realmuto exceed that of the general populace.