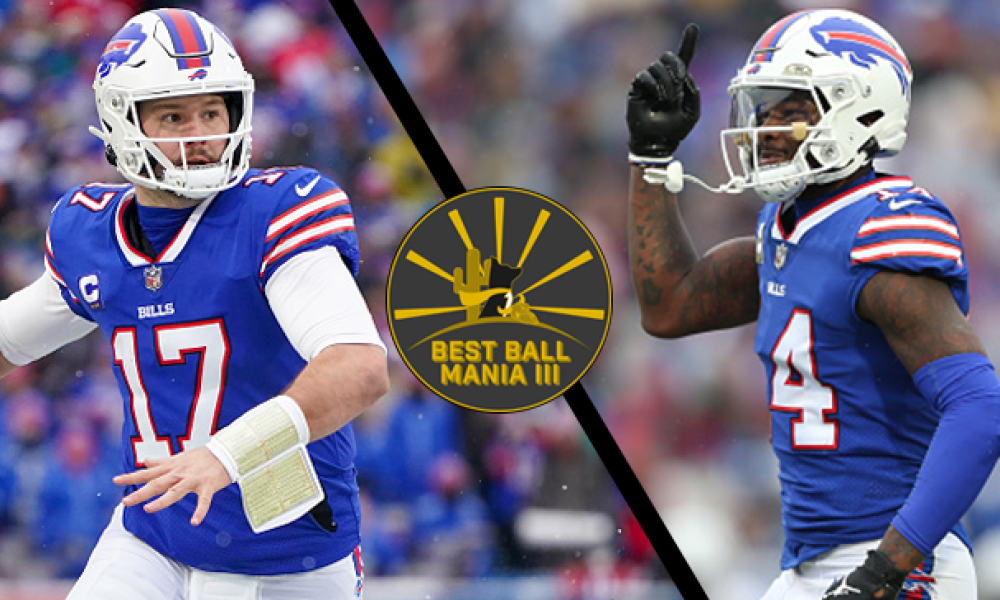 When drafting your Best Ball Mania 3 roster, simply choosing the best players when it’s your pick isn’t likely to cut it if you’re trying to make yourself a millionaire. It’s nothing like the fantasy football leagues or fantasy football mock drafts that you’ll do with your buddies at work or friends from high school. There are no fantasy football trades here, there's no roster management, no fantasy football waiver wire here. It's all self-contained and your roster is your roster. Simply put — We’re looking for a 99th-percentile outcome. It’s better than the lottery, at least! At least here, you can significantly put the odds much more in your favor. There will be over 450,000 entrants vying for the largest slice of the $10,000,000 prize pool — the $2,000,000 first place and a killer Underdog Fantasy ring that comes with being the champion. 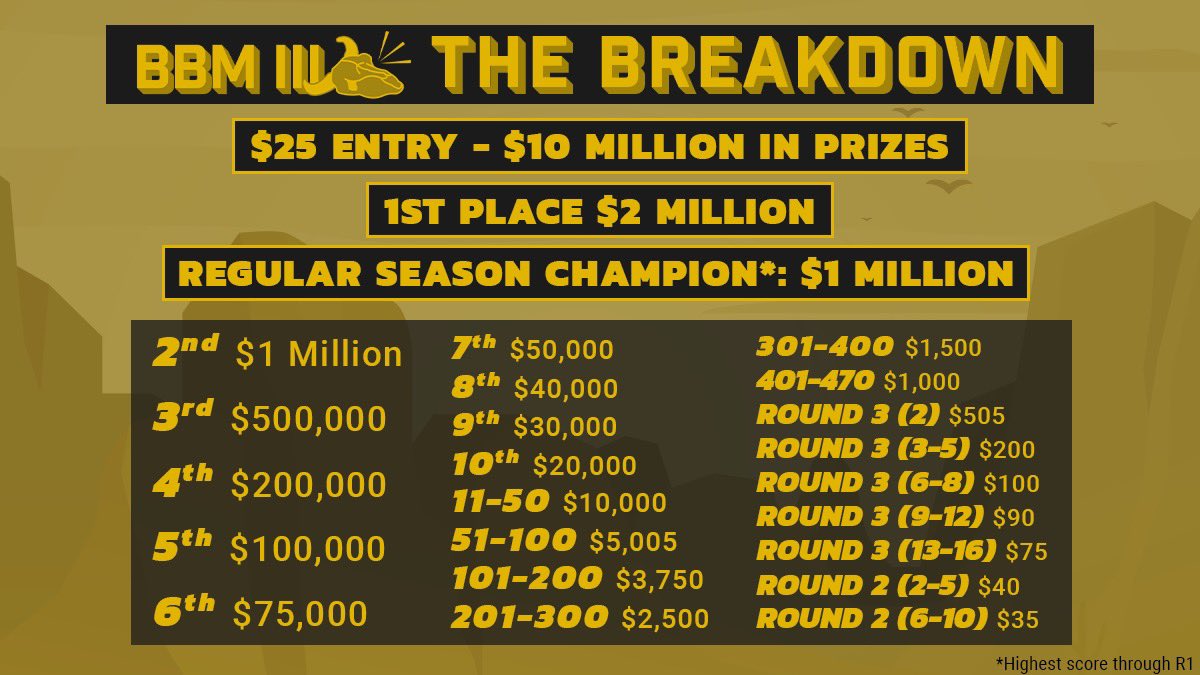 You have to be unique with your roster while maintaining upside, you have to have a plan that’s flexible to change mid-draft from the 11 other people you’re drafting against, and with a tournament field in the hundreds of thousands, you have to be willing to be a little more uncomfortable with your team. All with a 30-second pick timer.

We’re going to show you how with actual rosters I’ve drafted for Best Ball Mania 3,

To get in on the Best Ball Mania 3 action or to try your hand at best ball drafts, use promo code “ALARM” to get a full match on your initial deposit up to $100!

An easy way to increase the upside of your roster is by stacking. Andrew Cooper wrote an excellent piece on best ball stacking principles last week and you should definitely check that out. By drafting two or more players from the same offense, you’re making a correlated bet on that offense’s production coming from those players. Most stacking is intended to include a quarterback within the stack but it's not necessary to have the quarterback as you can get pieces of the offense RB/WR/TE or multiples of a position like these examples:

I’m sure you get the idea.

We talk about wanting to be unique with our rosters and it can work that way with stacks as well. For instance, if doesn't always have to be the top receiver you stack with. If you feel good about a certain quarterback like say Aaron Rodgers, you can grab one of his receiving options in the middle rounds like Allen Lazard or Christian Watson. Or you can draft Robert Tonyan or Sammy Watkins late.

Say you selected Keenan Allen but Justin Herbert goes before your pick in the next round. That's fine! With such a productive passing offense, you can always draft a Josh Palmer or Gerald Everett late and still get more access to the Chargers offense at a significantly reduced cost.

Building your roster and then engineering a stack late in the draft can work out very well too. Here are some offenses you can employ a late stack with.

4for4’s T.J. Hernandez has done a lot of great work and has compiled all of the teams that have made the finals of the first two Best Ball Mania tournaments with how they stacked their team. There has only been ONE team out of 210 Best Ball Mania that didn’t have a roster that features two players on the same team. All of the stacks combinations that were featured on final-round rosters with the frequency they were used are:

It’s very interesting to see 1 RB / 1 WR at the top, but somewhat surprising. It’s very easy to stack pieces of an offense without the quarterback and letting them get to you in drafts. It’s when the quarterback comes into play that drafters tend to make these mistakes:

What you’ll also notice is a stack of two teammates regardless of position is dominant over any other stacking scenario. Super-stacking (adding three or more teammates to your roster) has a much smaller probability of bringing you success in advancing through the Best Ball Mania playoffs, which makes a ton of sense. It dilutes your roster with non-starters, provided you have enough roster firepower elsewhere in the team you draft.

Hayden Winks of Underdog Fantasy took a look into teams that scored 150 points in Best Ball Mania 2 at any point during the playoff stages of the tournament and how frequently they stacked teams. 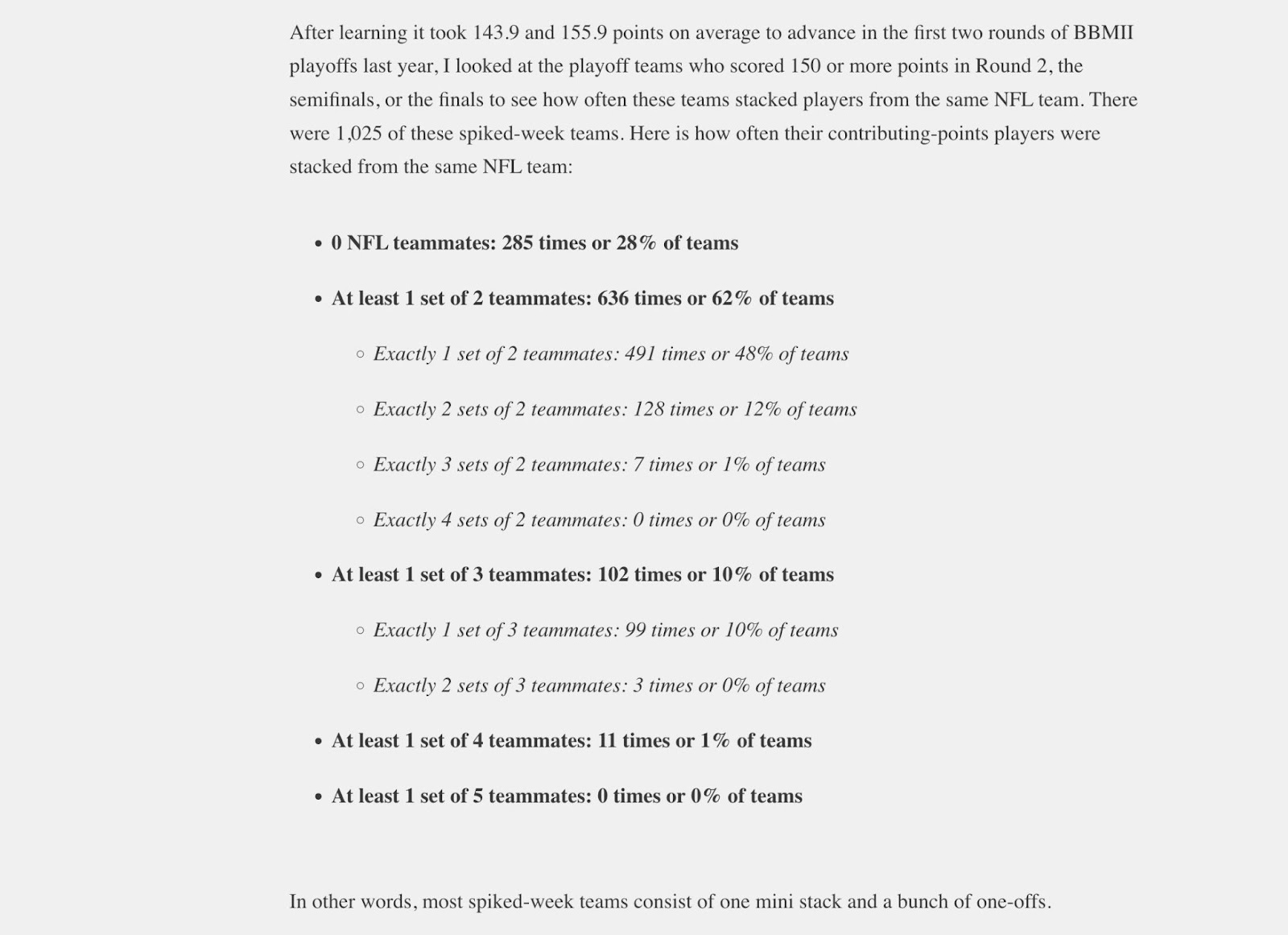 Both T.J. and Hayden come to the same conclusion: single-stacking teammates and having the rest of your roster as “one-off” players is far more profitable strategy than a super-stack of three or more teammates or having zero player stacks on a single 18-player Best Ball Mania team.

Putting This Process Into My Best Ball Mania 3 Team

Around here, we practice what we preach.

I drafted this team on Monday, May 23rd, highlighting what we’re talking about. Typically, I am drafting the quarterback second when targeting a stack while having a pass-catcher or running back. I’m not starting my draft with a stack in mind — I’m letting the pieces fall where they may and then bending and shifting my focus during the draft to see what the other drafters are doing, whether they are drafting more in a certain position more than normal, draft runs at a certain position, etc. 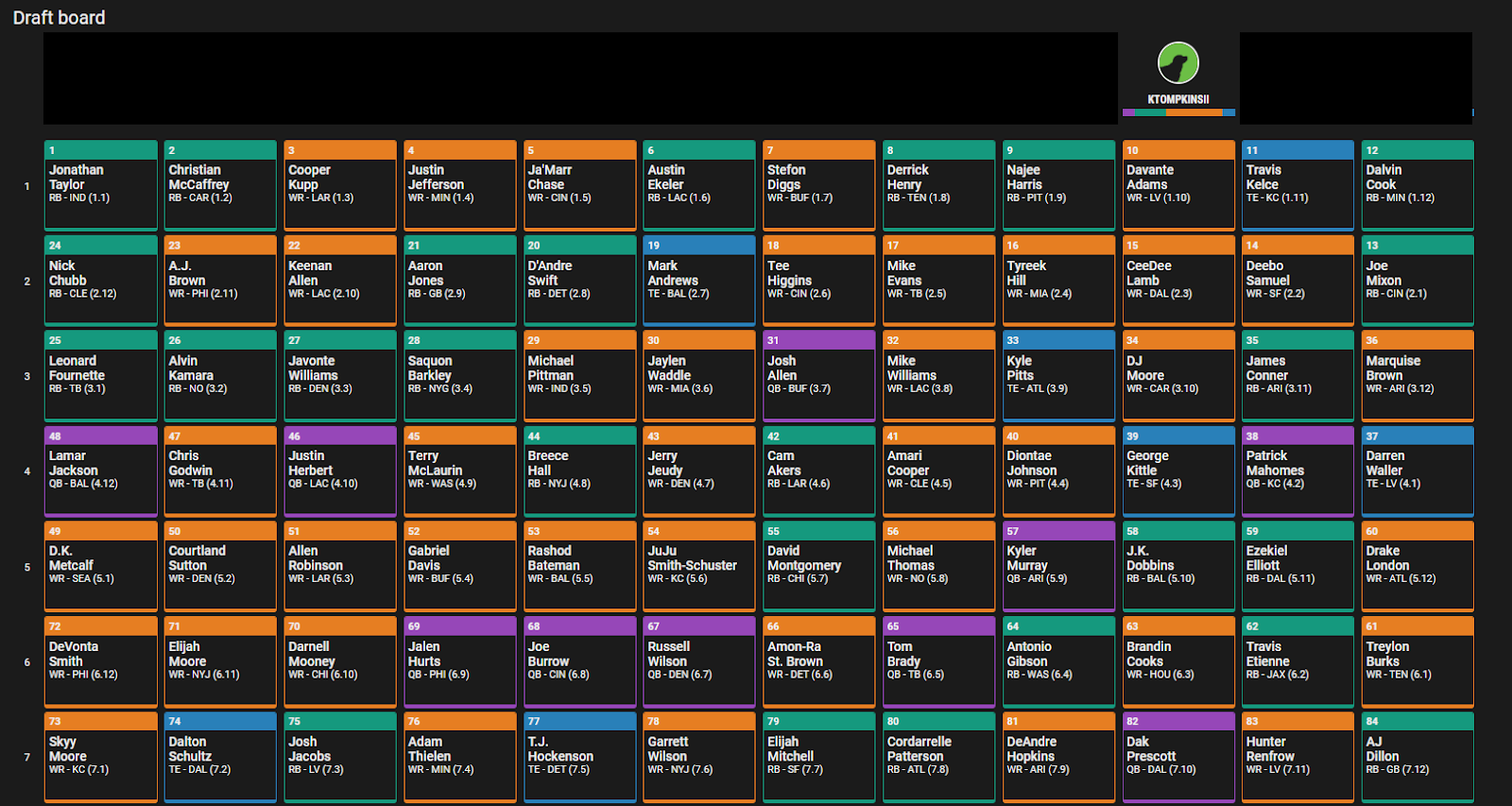 In the first four rounds of my Best Ball Mania 3 draft, I drafted multiple wide receivers to start my draft, plus an elite tight end.

Note: I will not hear slander on this from the robust running back contingent.

I took my first running back in the fifth round and then followed up with another receiver. I won’t lie — I sweated out my seventh-round pick because I was hoping he would get back to me and wasn’t sure if he would. After seeing pick 7.02 draft tight end Dalton Schultz, I had a feeling I would be in a pretty good position with everybody else already having a quarterback to stack CeeDee Lamb (2.03) with Dak Prescott, which I did with my pick at 7.10.

I could have easily drafted Prescott at 6.03, but with so many quarterbacks left on the board at that time (and many were picked in the sixth round), I felt like I could wait to select one in either the seventh or eighth round. It's incredibly important to be aware of your surroundings because from the first pick to the last, every pick counts. 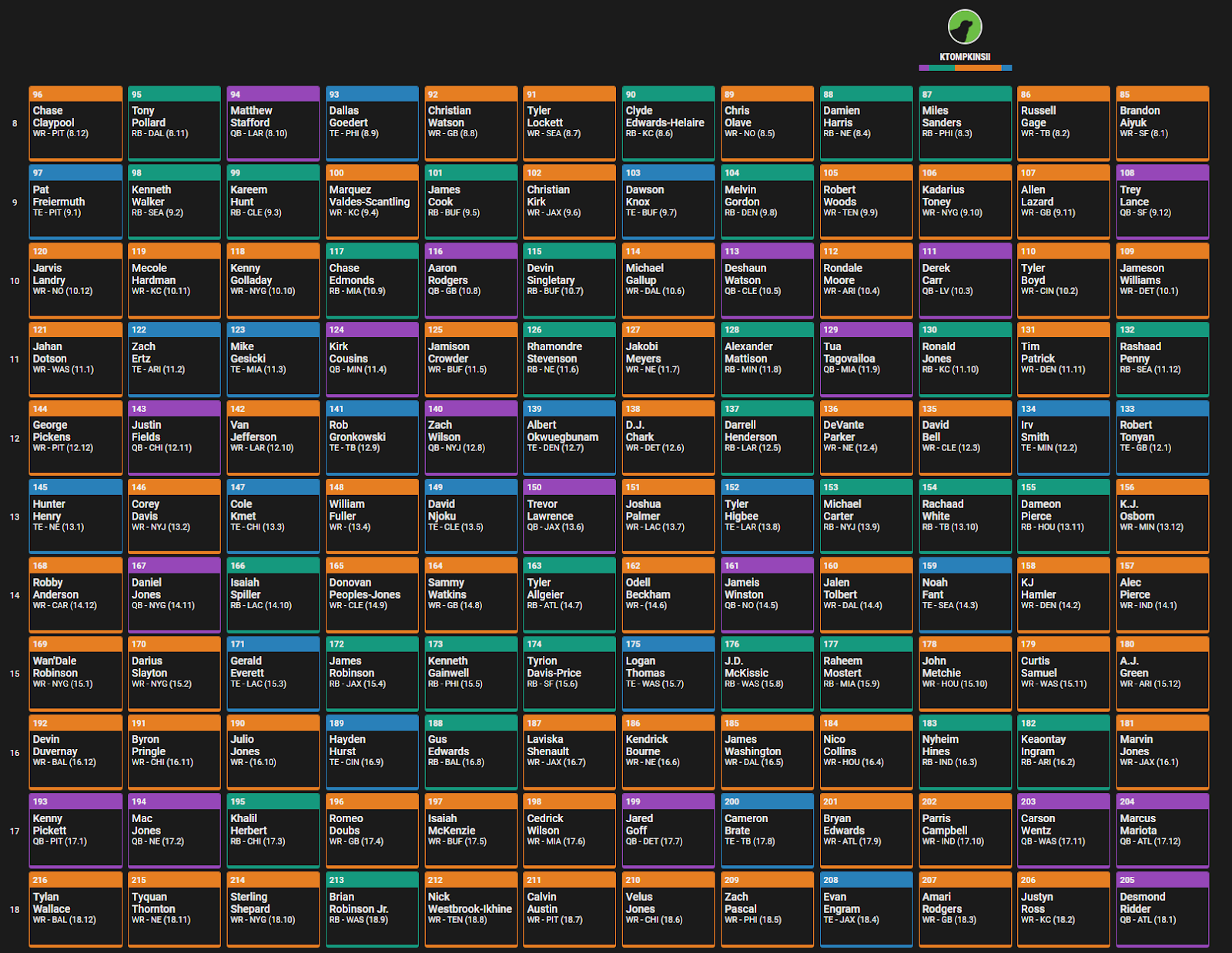 From there, I took my second running back, added a wide receiver, and selected Derek Carr as my second quarterback to pair with Davante Adams. Pairing both of my quarterbacks with each of my top wide receivers is a great way to supercharge your rosters with added upside. Both Lamb and Adams should lead their respective teams in target share and most receiving categories, so those two stacks should be fruitful for this roster’s overall upside and floor.

Some Final Thoughts About Stacking In Best Ball

By seeing what everybody is doing around you, you can make much better decisions that will result in a better team all-around — an evergreen tenet to bring with you not just in Best Ball Mania drafts, but in seasonal leagues as well.

Ultimately, when you're drafting in a format such as this, you need to draft like you're right. You have all the answers. It's very easy to just draft to ADP and select the top player of the queue, but having some conviction in your picks will go a much longer way.

As this is Part 1, Part 2 will go into gaining a further edge should you get deeper into the tournament with correlations.