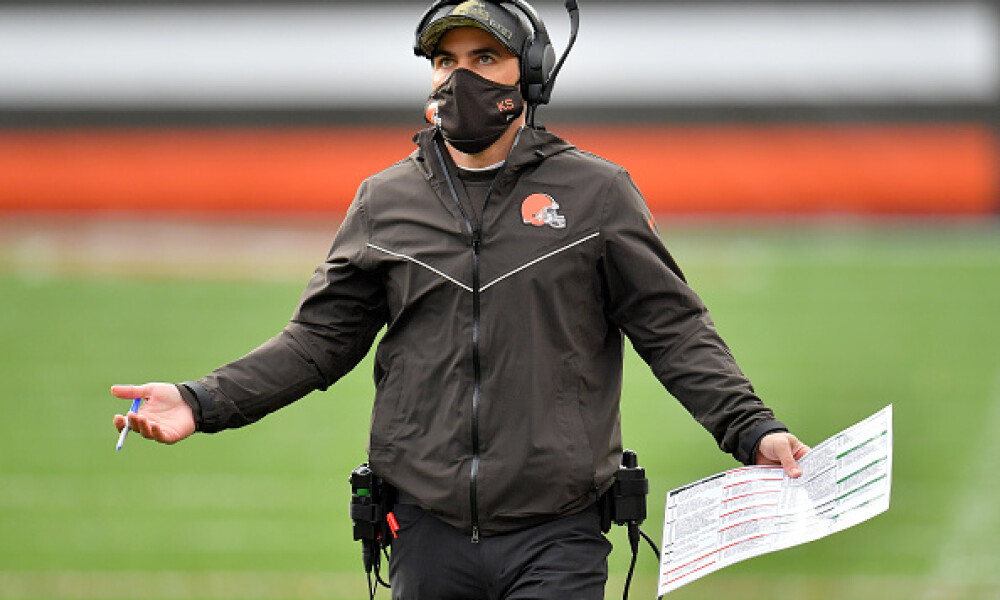 Welcome to our second installment of the 2021 Coaching Systems analysis. Before we start breaking down the AFC North, be sure to check out the Overview of Coaching Schemes so you have a reference point for any terminology with which you might be unfamiliar. Probably makes sense to bookmark it for easy referral, as well as the AFC East which we have recently covered.

Now let’s get to it!

Offensive Breakdown: While John Harbaugh may not be the most likeable guy in the room, he is definitely one of the smartest. Known for his ability to identify premier talent on the field, Harbaugh is also smart enough to surround himself with top coordinators and assistants. He doesn’t design schemes himself, but he knows what he wants to see and continues to align himself with some of the most innovative minds in football. Greg Roman is the perfect example.

The Ravens drafted Lamar Jackson in 2018, knew exactly what his strengths and weaknesses were as a signal-caller and got themselves one of the top minds for designing schemes around a mobile quarterback. Under Harbaugh’s brother Jim in San Francisco, Roman built a scheme that highlighted all of Colin Kaepernick’s strengths, most notably, his ability to run the ball. Roman then headed east to Buffalo where he was tasked with doing the same with TyRod Taylor. True talent aside, Taylor had some shining moments in that offense and Roman was the man to thank.

Roman arrived in Baltimore in 2019 and the only thing Harbaugh asked was that his offensive scheme be West Coast-based, the style of offense with which he was most familiar. Roman did just that, developing a system that uses a West Coast passing scheme to move the chains but also blended RPO elements to allow Jackson the freedom to make decisions based on defensive reads. The results were spectacular as Jackson rushed for over 1,200 yards on designed bootlegs and RPOs while passing for over 3,100 yards and 36 touchdowns. There was some statistical regression last year as defenses identified the scheme, but Roman began to add some spread formations which then pushed the defense onto its heels more.

This year, we can expect much of the same. Lots of 22-personnel formations, a strong rotation of runners between, Jackson, J.K. Dobbins and Gus Edwards and the potential for increased passing downfield as Roman takes the reins of passing game coordinator with the departure of David Culley.

Defensive System: 3-4 base with multi-front looks; Cover-4 primarily but mixing in man coverage

Defensive Breakdown: Martindale’s defense is predicated on pass rush and pressuring the quarterback. He likes to get aggressive with his blitzes and should be able to continue doing so given the personnel he has to work with. The front seven was retooled prior to the 2020 season and the secondary is one, if not the best in the league with all of the members of last year’s secondary return.

Offensive Breakdown: Zac Taylor, who spent the two years prior to his hiring in Cincinnati working under Sean McVay, rolled out an offensive scheme with a lot of the same elements to that of his mentor. His OC, Brian Callahan, stems from the same coaching tree, which actually dates back to Paul Brown, and the two have built a West Coast based offense predicated on the short-passing game with some spread offense infusion. Both agreed that establishing the ground game first was a priority as well and implemented a zone-blocking scheme with pulling guards and tackles having more room to block downfield. Injuries to the offensive line derailed those plans in each of the last two seasons, but they’re still locked into it, as evidenced by the return of Frank Pollack who assumes the offensive line coaching duties and is working on a wide-zone blocking scheme.

Taylor and Callahan also worked in more RPO last year, given Joe Burrow’s extensive work in Joe Brady’s RPO-heavy system at LSU, but they may back off it this year because of Burrow’s knee injury. The wide-zone blocking should provide a nice boost for Joe Mixon, though, so keep tabs on him.

As far as the passing game goes, you can expect more of a continued lean on 11-personnel packages now that Ja’Marr Chase is in-house and joins Tee Higgins and Tyler Boyd, both of whom started to blossom last season. If you’ve read the Coaches on the Hot Seat article, then you know I believe Taylor to be under some extra scrutiny this season, so pulling out all the stops this year is going to be necessary.

Defensive System: 4-3 with some multi-front looks, mix of man and zone coverage with outside press

Defensive Breakdown: Lou Anarumo continues to revamp this defense and, once again, focuses on fixing the secondary, an Achilles heel for the Bengals for some time. Last year he lobbied to acquire Trae Waynes and while he [Waynes] had his ups and downs in Year 1 with the team, he remains a strong force in the secondary. They lost William Jackson, but turned right around and signed both Chidobe Awuzie and Mike Hilton which definitely strengthens the unit. Anarumo likes to run press-man coverage on the outside, so expect these three to either battle it out in camp for the starting positions or work around a rotation.

The 4-3 base is what you will see primarily, but Anarumo backed off his blitzing last season to keep the zones in the middle intact with the safeties back and we should see more of that this season as well. Still, with the defensive line losing Geno Atkins and Carlos Dunlap, they’re going to need some help pressuring the quarterback. If they don’t, opposing quarterbacks are going to have all day to throw and while the secondary has seen some improvements, they won’t be able to hang in coverage the whole and the Bengals will start giving up more big plays.

Offensive Breakdown: The simplicity of Kevin Stefanski’s offense is actually quite refreshing. Yes, there are some gimmicks thrown in here and there, but the run-first mentality and an improved offensive line is what’s transforming the Browns into perennial playoff contenders. They run a simple West Coast based offense with the zone blocking scheme Stefanski learned from Gary Kubiak when he was in Minnesota. The quick, short passes will help move the chains, but they will lean heavily on the run and allow it to open up play-action downfield, though they didn’t exactly run as much as you would have thought, likely due to the loss of Odell Beckham and no bona fide replacement for him on the deeper routes. Alex Van Pelt will continue to serve as both the quarterbacks coach and the offensive coordinator so Stefanski will retain the play-calling. Van Pelt’s focus will stay on developing Baker Mayfield and guiding him through, what will hopefully be, another step forward.

Defensive Breakdown: What Joe Woods has done for this defense during his short tenure has been absolutely outstanding. The front seven is incredibly strong – both physical and fast. Myles Garrett is an elite pass-rusher and now they add Jadeveon Clowny to the rotation with Takkarist McKinley on the right side. Anthony Walker does a good job directing traffic in the middle and the addition of rookie Jeremiah Owusu-Koramoah is only going to further strengthen the weak side.

But where Woods is best is the secondary and with Denzel Ward, Greedy Williams and Grant Delpit all healthy, they should be a very difficult until to throw on. Not to mention the addition of rookie Greg Newsome. They’ll be in Cover-3 the majority of the time, but Woods was also part of the staff that worked with Robert Saleh and used a Cover-6 where the safeties would swap in and out of the weak side. This should be an exciting crew to watch and could be an IDP gold mine for turnovers.

Offensive Breakdown: While Mike Tomlin heads into his 13th season as the Steelers head coach, their offense is expected to have a different look for the first time in close to a decade. When Randy Fichtner took over for Todd Haley back in 2018, he maintained most, if not all the basic concepts in Haley’s scheme. He favored 11-personnel formations, bled in some 22 and 12-personnel at times, and worked to stretch the defense as much as possible. Now that he is gone, Tomlin promoted QB Coach Matt Canada who has a different style. What style will be on display, though, is still a bit of a question mark.

Canada has spent the majority of time in the college ranks and has run multiple schemes, all dependent on the personnel. At Northern Illinois, he ran a spread offense. At Wisconsin, it was a run-heavy scheme designed around a lot of 2-RB formations. At North Carolina State it was a pistol offense and at LSU it was a pro-style. That’s quite the mixed bag of schemes, isn’t it?

What we can do is look to all of those systems and find some common threads, of which there are two primary ones. The first is a heavy use of pre-snap motion. But that’s not a scheme/system, however. It’s more just window dressing. Canada has used it extensively wherever he’s been, including late last season with the Steelers. Problem is, Ben Roethlisberger hates it and while the Steelers incorporated some, it quickly disappeared.

The next thing that is common wherever Canada has been involved in the offense, is the use of a power-running system and play-action. That bodes well for Najee Harris’ potential usage, though this offensive line is in flux as they lost a number of guys to free agency and Tomlin let o-line coach Shaun Sarrett leave. Not that things were looking too good heading into the offseason as the Steelers line ranked 23rd in 2019 and then fell to 31st last season. We could be looking at addition by subtraction, but we won’t really know until we see them in action during training camp. Nevertheless, you can expect the Steelers to use the run early to help set up the pass.

As for personnel packages and schemes, pistol formation seems like it would fit a lot of what the Steelers want/need to do. Big Ben would already be dropped back, they can use RB play-fakes more easily and they can stay grounded in more 11 and 12-personnel packages, given their strengths at the receiver position. They can also use some 22-personnel here as well. Running back Anthony McFarland comes from Maryland where he has worked with Canada before. That may ingratiate him into whatever scheme or package the new OC wants to run.

This all sounds pretty complicated and it’s tough to nail down without seeing what they do in camp, but they are likely to keep things simple early, limit the pre-snap motion and give Big Ben a chance to gradually adjust. GM Kevin Colbert already said they the Steelers will roll out Canada’s system slowly so the team has a chance to adapt properly to any and all changes.

Defensive Breakdown: There aren’t going to be any sweeping changes on defense as Tomlin and DC Keith Butler have been pretty happy with the way things have looked over the last few seasons and their ability to read offenses and play the match-ups on defense have been strong. The base formations and heavy blitz packages are going to remain, but there are some personnel changes with which to contend, most notably Bud Dupree, Steven Nelson and Mike Hilton are gone. The secondary will be the place to watch the most as Joe Haden and Minkah Fitzpatrick are the remaining strengths, but the recent signing of veteran Melvin Ingram should help soften the blow of Dupree landing in Tennessee.