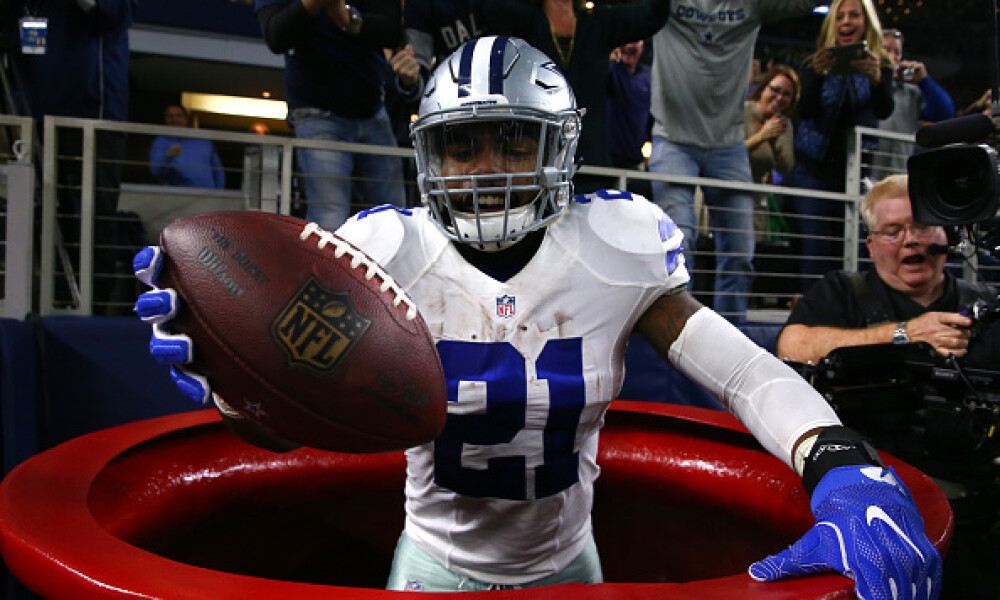 Debunking all the Ezekiel Elliott Myths

Ezekiel Elliott is once again going to dominate in fantasy football in 2021.  And, as much as I’d like to argue with every single person individually on Reddit and Twitter (and trust me - I like to) I’ve simply grown tired of arguing about this particular player.  So I decided to just obliterate all of the arguments I’m seeing against Zeke right now, once and for all, in advance.  So buckle up.

“Zeke Has Lost A Step”

Oh really? When exactly did Zeke lose this “step”?  It obviously wasn’t the first five weeks of the season when he was the RB2 in full PPR behind only Alvin Kamara .  I think what you meant to say is that Zeke lost his TEAM.  Here are the injuries that affected the Cowboys running game last year.

For those keeping track at home, that’s basically the entire team.  It was as if Ezekiel Elliott lost a bet with the devil and was teleported onto the Jets.  And, EVEN THEN, he finished as RB11 in full point PPR while missing a game himself.  In fact, out of his hobbled teammates above, Zack Martin was the player who missed the least games.  Here are Zeke’s points per game with and without just Martin.

If you take RBs who played at least a quarter of the season, 18.79 PPR points per game would have been the fourth-highest.  More than Nick Chubb or Aaron Jones .  If you just look at the two games where he had Dak Prescott , Tyron Smith , and Zack Martin healthy, he averaged 25.95 points over those two games.  In the first five games where Dak played, Zeke averaged over 100 yards and a touchdown a game.

Oh yeah?  When does that start happening?  Because this past year Zeke played the most snaps of any running back in the league.  His 777 snaps were 70 more than the next highest in David Montgomery .  AND ZEKE DIDN’T EVEN PLAY WEEK 15 AT ALL.  He could have missed another game entirely and he still would have led the league in snaps.

No he doesn’t.  Zeke’s 499 pass snaps ALSO led the league.  In fact, 499 pass snaps is 110 more pass snaps than Alvin Kamara played.  Kamara is considered to be a pass catching back, I believe.  Tony Pollard played 244 passing downs and that includes playing 37 in the week when Zeke was out entirely.  Less than half the passing down snaps that the starter played even while Pollard played an extra game.  Not exactly a “split backfield” if you ask me.

You see, when a team decides to use a second back on passing downs it’s usually for one very specific reason.  They are good at pass protection schemes.  Gio Bernard has been very good at pass pro while Joe Mixon hasn’t which is why Bernard played those snaps.  But here is the problem with that.  In 2020, Tony Pollard was the 73rd ranked running back in pass blocking per PFF.  Which is obviously terrible because there are only 32 teams.  But that’s actually a drastic improvement for him somehow.  In 2019, he was ranked as running back number 131 in the league in pass blocking.  Yes, there were only two running backs in 2019 that were worse in pass protection.  In short - he’s not good at it.  So this whole idea of a split backfield where one guy gets the run plays and the other gets the pass plays is a fallacy unless you are predicting that Tony Pollard will be the guy who goes out there on first downs to run the ball while Zeke is the backup coming in on third downs.  If you believe that, please tweet at me @CoopAFiasco and let me know that that is your prediction for the 2021 season.

“Tony Pollard showed us this year that he’s like, really good”

I assume that’s probably what your hypothetical tweet might say so let’s just address it now.  Tony Pollard essentially had one "good game" where he had 69 rushing yards.  And that was week 15 when Zeke didn’t play.  You might say “what about games like the Vikings game? Tony Pollard had 60 yards on only five carries!”.  Well, in reality he had 42 yards on one carry and 18 yards on the other four.  But that doesn’t really even matter because Zeke had over 100 yards in that game.  Busting a good run when the starter is out and the defense thinks they can take a little break is not proof that you need to get a huge chunk of the touches.  And the same thing happened the week before vs. the Steelers.  Nine carries for 57 yards sounds really nice until you realize those plays were essentially two 20 yard runs and a 12 yard run when they caught the defense sleeping on passing downs while he also had runs of 0, -1, and -2 yards.  Not exactly a model of consistency and, much like a lot of change of pace backs, the efficiency numbers aren’t nearly as good when you are the guy who has to run the ball on 2nd and short or 3rd and goal.  Though we don’t exactly need to worry about that for Tony Pollard because Zeke got 32 carries from inside of the 10 yard line and Tony Pollard had four.  And half of them came in the game when Zeke was out.

“There are too many mouths to feed”

Now?  As opposed to when? Last season?  It’s the same team! Except this year they get their quarterback and all the blockers back.  Even with the bumbling likes of Andy Dalton under center for the vast majority of last season and Zeke missing a game, he got the sixth most carries of any running back and the fourth most targets.  All while the team was throwing the ball the second most of any team in the league.  Through the first four games of the season before he got hurt, Dak Prescott was on pace to VAPORIZE the pass attempt record.  He was on pace to throw over 800 passes when the record for a 16 games season is 727 by Matt Stafford (and no one else has thrown over 700 besides him). And Zeke was the RB2 over that span.  But this year they are going to be too pass heavy for Zeke?  The offense will be too busy throwing touchdown passes for the running back to plunge in goal line carries?  We already talked about how the offense being terrible was the huge reason that Zeke had such a “disappointing” RB1 season in PPR - why would bringing back the same offense except with a better offensive line be worse for Zeke?

Zeke is too old

Zeke is 25 years old.  He’ll turn 26 this summer.  If that is “too old” for you then hanging out over at the dynasty fantasy football subreddit has truly scrambled your noggin.  And people have the nerve to, in the very same breath, tell me that Zeke doesn’t have enough “tread left on the tires” so they are taking Derrick Henry .  The same Derrick Henry that is 27 years old and has gone to the playoffs in back to back years running the ball up the gut like a tractor trailer 782 times over that span.  Probably much safer to take a Dalvin Cook who is the exact same age with an extensive injury history or CMC/Barkley coming off major injuries.