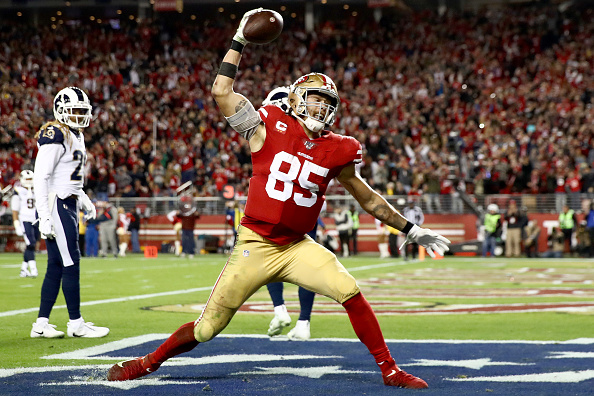 I’ve always hated the phrase “there’s more than one way to skin a cat”. The phrase should probably be “don’t skin cats’ you weirdo”. Nevertheless, the thoughts behind the colloquialism are valid, especially in terms of fantasy football. There isn’t one secret ingredient to drafting. Despite what the “Zero RB” or “Robust RB” or “Lefthanded RBs Only” crowds will tell you, the secret to a great fantasy draft is to know your format, adapt to the draft, and get lucky. There are strategies you can implement of course but it’s best to not go into the draft with one strategy locked in. Instead you should know the different strategies and adapt based on what falls to you as the draft progresses. Be ready for whatever curveballs may come your way and pull them down the left field line if you have to.

Drafting a tight end is no different. So here we are going to go over some of the popular strategies and give you some advice based on which formats they work best in. So lets get to it!

One and Done Stud

Game Plan: This one is both self-explanatory and fairly common – you invest in one tight end that you believe you can trust, and you don’t draft another. Essentially you bank on the one guy and your ability to add someone for your buy week.

Best Formats: Smaller leagues (8-12 teams) with normal scoring (no tight end premium) where you start one tight end and bench space is limited.

Advice: This strategy works well if the right guy falls to you but you need to be sure it’s someone you trust every week which means they have either a very high floor or a medium floor with a high ceiling. As we’ve discussed in this series you ideally want a guy who is a top two target on his team so I would consider this strategy if I landed Travis Kelce , George Kittle , Mark Andrews , Zach Ertz , Darren Waller and Evan Engram (though you might want to handcuff him if you have a bench spot as we will touch on later).

People think that when you do this you just need to look up one tight end for your guy’s bye week, throw him on the watch list and that’s that but that strategy rarely pans out. You need to not only look up multiple guys, but also look at what teams in your league went “one and done” as well. For instance, lets say you land George Kittle . He not only has the same bye week (11) as Evan Engram , but the week before that, Travis Kelce , Hunter Henry , and Hayden Hurst are all on bye (and Zach Ertz the week before that). So, if you want to get your main bye week fill in target, you might want to consider adding him a couple weeks before you actually need him to make sure you get him before the competitors.

Game Plan: You decide that you are waiting on tight end this year and you aren’t going to spend on any of the big dogs. So what you do instead is you plan to grab two guys in the back end of the tight 1 range and in the early tight end two range – one who is a safe player you can start week to week and one who is a risky player that has higher upside.

Advice: This is a viable strategy but the biggest mistakes people make when they say “I’m skipping the top guys, I’ll just draft two later” is that they A. don’t draft two like they said and have just one, bad tight end or B. end up drafting either two low upside guys or two very risky guys. If you draft two guys that are both medium floor, low ceiling then you not only aren’t giving yourself a chance at glory but you are playing the guessing game as to who to start week to week. Same with two risky guys – could end up with two duds and scraping your way off waivers (or worst case in best ball there are no waivers). The way you want to do it is to have a dependable guy you can start week one paired with a risky upside guy who can potentially be your league winner. A lot of the “safe” guys are the third target on their team so have a difficult path to top five tight end but are still coveted by some so you may need to go “safe guy” first.

Game Plan: You are just completely skipping the field of “tight end ones” and stacking a bunch of guys later with the thought process that one will emerge as a tight end one. This allows you to accumulate value elsewhere while, in the grand scheme of things, not necessarily sacrificing at your one tight end spot, assuming you hit.

Advice:  Although risky by nature, we know this is a viable strategy because last year’s winner of the Scott Fish Bowl, Gary Haddow of Fighting Chance Fantasy, just successfully pulled it off. 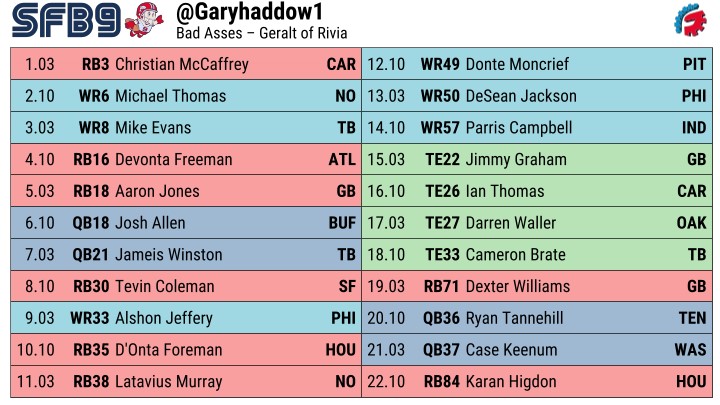 For those not familiar, this is a tight end premium format so guys like Travis Kelce , George Kittle , Zach Ertz etc. were all going in the first couple rounds. Gary loaded up elsewhere (allowing him to hit the jackpot on CMC, Michael Thomas , and Aaron Jones ) then didn’t draft a tight end until the 15th(!) round. Now, three of those dudes were borderline useless but he hit the jackpot on Darren Waller so that’s what matters. Each year guys emerge from the depths of rankings (Darren Waller , Tyler Higbee , Dallas Goedert , Will Dissly before the injury) so the trick here is to draft enough guys that you give yourself a chance. It’s most viable in best ball and large leagues/tournaments that have large benches (as you can see, the SFBX has 22 rounds) because you really can’t afford to carry 3 tight ends on your bench in most formats

Game Plan: Pretty simple – a team heavily utilizes the tight end so you draft the best pass catching tight end behind him with the idea that, if the starter gets hurt, you might have just backdoored your way into a top 5-10 tight end.

Advice:  There are two kinds of handcuffs – the “traditional handcuff” and the “handcuff plus” (though I’ve been trying to introduce a third kind which is the “negative handcuff” or “handcuff minus”). The traditional handcuff only has value if the starter gets hurt while the handcuff plus has standalone value that skyrockets. Here are some handcuffs and handcuff+ tight ends ranked by how valuable I believe the handcuffs to be.

Naturally, the handcuff pluses are more expensive than the handcuffs in draft. But that doesn’t necessarily mean that a handcuff plus has more value than a handcuff if both starters were to go down. For instance, Goedert in the event of an Ertz injury would be the most valuable. But, if Travis Kelce goes down, Austin Sefarian-Jenkins is an exclusive pass catcher poised to take over a massive role in that offense so he might very well be a top 10 tight end in that event. Kaden Smith actually did take over after the Engram injury, putting together top 10 tight end weeks including being tight end five overall championship week last year. So definitely guys to put on your watch list at the very least

Since I teased it, the idea of a “negative handcuff” is someone who would actually lose value if the other tight end were to get hurt. For instance, Jonnu Smith is already a heavy blocking tight end in a team that likes two tight end sets. If blocking tight end MyCole Pruitt were to get hurt, Jonnu Smith would likely have to absorb more blocking duties while Anthony Firkser would likely see increased work in the passing game. This is a scary proposition for Jonnu owners, and it could affect guys like Higbee (Johnny Mundt gets hurt and Higbee increases blocking while Everett increases passing) or even Irv Smith if Kyle Rudolph gets hurt. Moving Irv Smith from the slot into the primary in-line tight end role might only add blocking snaps to his snap count total which could actually make him a worse fantasy player.