2022 Fantasy Baseball Player Spotlight: Dansby Swanson On a Power Surge in May 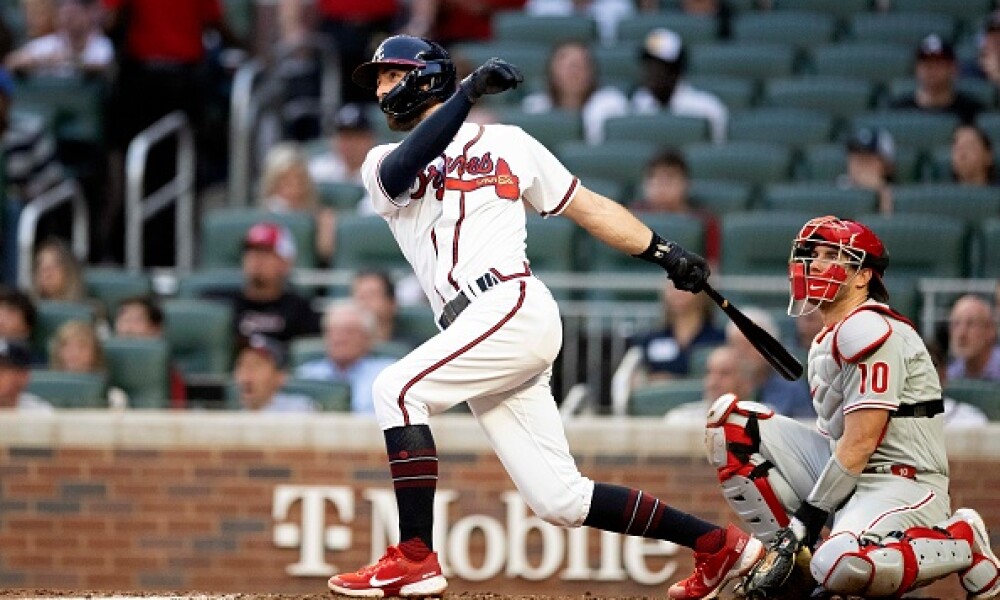 For the next shortstop installment of the fantasy baseball player spotlight on Fantasy Alarm, I will focus on the outstanding month from Dansby Swanson and look at the prospects of his offensive output continuing. Swanson’s power has returned in a big way and is helping fantasy baseball managers in both points league and rotisserie. With about a quarter of the season already in the rearview mirror, is Swanson a player we should buy high or should we sell on this May surge? He may actually still be available on your waiver wire in a few leagues. Let's take a closer look at the Atlanta Braves shortstop and what he can provide for your fantasy baseball lineups moving forward.

You might be able to go win a bar bet over the holiday weekend by asking people who they think the MLB shortstop with the most home runs and the highest slugging in percentage in May is. Bo Bichette? Francisco Lindor? Willy Adames? Wander Franco? The answer is none of the above. With five home runs and a .530 slugging percentage, Swanson is your leader in the clubhouse this month. 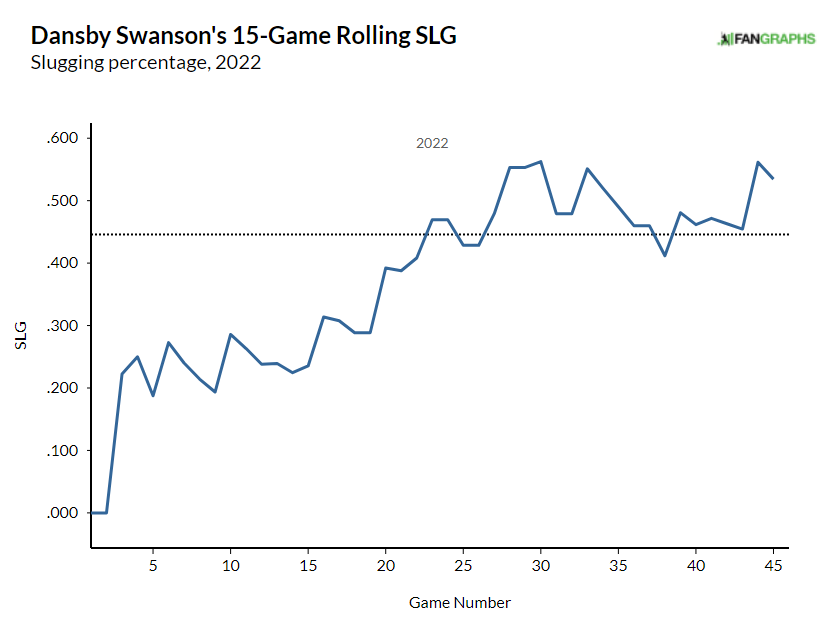 As you can see from his rolling average in slugging percentage this season, Swanson has been getting hotter than the summer weather in Atlanta for the past 20 games. Five of his six total home runs and 16 of his 23 RBI have come this month, and the Braves are finally rewarding him because of it.

In Swanson’s first 43 games, 41 of them were spent in the seventh, eighth, or ninth spot in the lineup. The last two games he has hit second in the order. That could just be a product of Ronald Acuna being a bit banged up, but instead of moving up Matt Olson to the two-spot where he had hit for about the first 40 games of the year, Swanson got the nod. If he could stay in that role for the time being, he could be in the elite position of hitting right in front of Olson, Austin Riley, Marcell Ozuna, and Ozzie Albies.

What’s interesting is we have seen this type of production from Swanson before, but it’s unclear as to whether or not it is sustainable. Here are Swanson’s monthly numbers for 2021.

Perhaps not surprisingly, May, July, and August of last year were the three months where Swanson got his flyball rate up to around 41%. Is that the same change for Swanson this year, and is that all it takes, him just focusing his efforts on lifting the ball? In a word, yes. 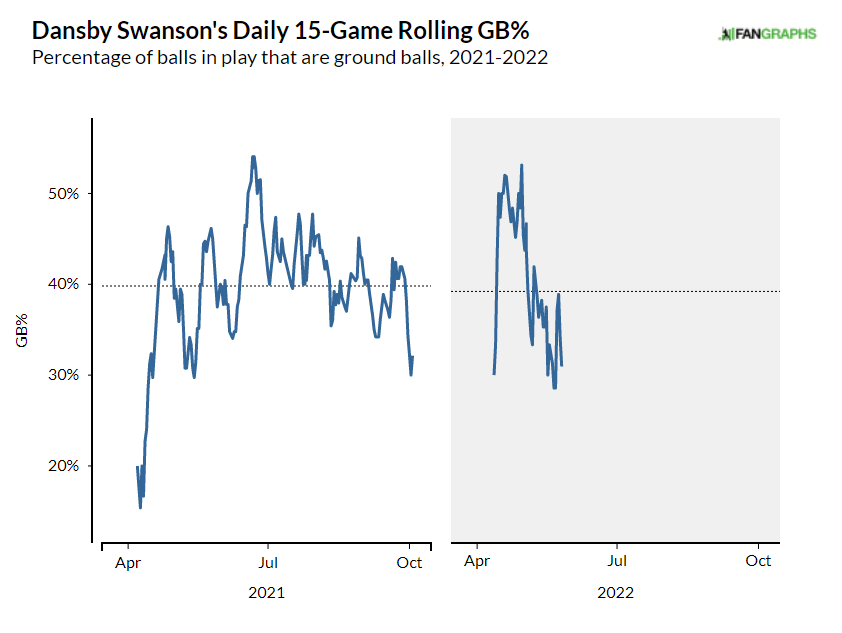 As we track Swanson the rest of the year, we can choose to pay close attention to two things. First, what does his batted ball profile look like? Are the ground balls staying down and the flyballs and line drives sustaining? Second, where is he batting in the order. Do we see him drop back down to eighth or ninth when all Braves are healthy? If he does, he loses valuable plate appearances, but also valuable protection by the elite Atlanta hitters in the top half of the lineup.

Right now, Swanson is available in 12% of Yahoo fantasy baseball leagues, so this is a run, don’t walk situation to see if he might be available in your league. As long as we get this May batted-ball profile and solid top-of-the-lineup slot, he is a must-start every day.